The overnight passenger vessel Seeandbee was so massive, you could land an airplane on her - and they did.

The 500-foot, coal-fired sidewheel steamer was launched at Wyandotte, near Detroit, on Nov. 9, 1912. She was built for the Cleveland and Buffalo Transit Co., but also made stops in Detroit.

The Cleveland & Buffalo Transit Co., or the C&B, as it was known, was a popular steamship line established by Morris A. Bradley in 1885 and incorporated in 1892. It initially offered passenger and freight service, as its name would suggest, between Cleveland and Buffalo. It would expand its routes to include Toledo, Cedar Point and Put-in-Bay in Ohio, as well as Detroit, Buffalo, N.Y., and other stops.

The Seeandbee, the pride of the C&B fleet, made her maiden voyage on June 19, 1913. At the time, she was the largest passenger ship on the "inland seas," and remained the only passenger liner with four smokestacks ever built for Great Lakes travel.

The vessel's name came from a contest and is an acronym for C&B.

She would not return to the site of her construction, Detroit, until the 1930s.

But with the growing popularity of automobiles, especially along the Cleveland to Buffalo route, the C&B line fell on hard times. In 1938, the line operated at a loss of $192,162 (about $3.4 million today, when adjusted for inflation) before fixed charges and other income. On May 27, 1939, a special shareholders meeting was held in Cleveland, at which shareholders voted 16,000 shares to 4,600 to liquidate the company.

The Cleveland & Buffalo Transit Co. of Illinois, which was independent of the Cleveland firm, was organized earlier that month in order to charter and operate the Seeandbee under lease; the rest of the C&B line, however, remained idle. The Seeandbee's fleetmates, the City of Erie and Goodtime, were put up for sale, as was the hull of the City of Buffalo, which was all that was left following a fire that gutted that vessel in 1938.

In March 1941, the Chicago-based C&B, led by its president, Thomas J. McGuire, bought the Seeandbee, anticipating an increase in Great Lakes travel because of the wartime curtailment of ocean cruises. That ownership would be short-lived, however.

Following the bombing of Pearl Harbor, Hawaii, that December, the country found itself entering World War II and in need of aircraft carriers.

What would follow would become one of the most unlikely change in careers for the beautifully appointed passenger liner.

The U.S. government requisitioned the Seeandbee on March 2, 1942, at a cost of $246,000 (about $4 million today). Then, some 1,200 workers began removing her superstructure and lavish upper works and turned her hull into the aircraft carrier USS Wolverine. She was commissioned on Aug. 2, 1942, at Buffalo, N.Y., and made her first trial run as an aircraft carrier a week later, on Aug. 9.

Uncle Sam also requisitioned the Greater Buffalo from the Detroit & Cleveland Navigation Co., and turned it into the aircraft carrier USS Sable.

These night boats-turned-aircraft carriers were used to train Air Force pilots for the war effort. Between 1942 and the end of the war in 1945, more than 15,000 pilots were trained in Lake Michigan aboard the so-called “freshwater flat tops.” Among them was future President George Bush.

Following the war, the Wolverine was decommissioned and later sold for scrap and dismantled at Milwaukee in 1947.

Watch video of a Ford Motor Co. cruise leaving Detroit in 1937, including footage of the Seeandbee under way, here. 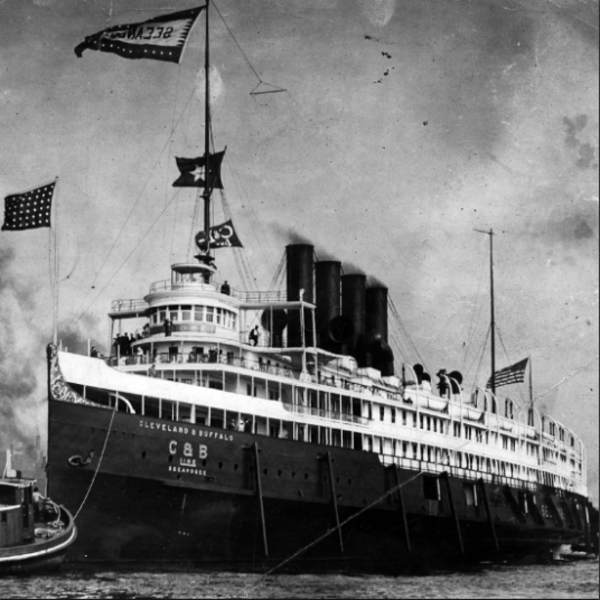