The 47-story Greater Penobscot Building towers over Campus Martius, an Art Deco masterpiece that has dominated the city's skyline for more than 80 years.

The building is named after a tribe of American Indians in New England. The name Penobscot means "the place where the rocks open out." Simon J. Murphy, who made a fortune as a lumber baron before coming to Detroit, spent his youth working on the Penobscot River in Maine. As the nation moved west, Murphy’s lumber empire moved with it, and he settled in Detroit. When it came time to name his new building, his thoughts returned to his roots.

There are actually three Penobscot buildings. The first is the 13-story building Murphy erected in 1905, though he died shortly before it opened. It was joined by a 24-story tower in 1916 built. The third, the 47-story tower known as the Greater Penobscot, was built at a cost of $5 million. The latter two Penobscots were built by his family.

The 47-story Greater Penobscot towers over Campus Martius, an Art Deco masterpiece that has dominated the city’s skyline for more than 80 years. Its cornerstone was placed Dec. 17, 1927. It was the eighth-tallest building in the world when it informally opened on Oct. 22, 1928, and the fourth-tallest in the United States. At 565 feet, it remained the king of Detroit’s skyline until 1977, when it was surpassed by the 729-foot Renaissance Center. It has since been demoted to the number three in town.

The building’s formal opening was held Jan. 14, 1929 — less than a month before the death of William H. Murphy, son of the man who erected the first of the three Penobscots.

There is an urban legend that the building’s 100-foot tower with its winking red orb was once used as a port for a dirigible. In truth, this “blazing ball of fire,” as one newspaper article described it at the time, was simply an aviation beacon. These days, the tower and its sometimes-blinking red light are simply for decoration. The orb, which is 12 feet in diameter, was first turned on when the building opened 79 years ago and can be seen 40 miles away — when it’s working, anyway.

The building has not been without controversy over its eight decades. For example, those are indeed swastikas adorning the exterior of the Penobscot, but they weren’t put there by Nazis. The swastikas are part of the building’s American Indian motif and symbolize sun worship. Suggestions during World War II to get rid of them were discarded. The swastikas on the Penobscot also are angled differently than those used in Nazi Germany.

The building's lower floors feature the work of master sculptor Corrado Parducci, who, in a tribute to Murphy's beloved Maine, created a river-like motif and another with logs floating down stream. 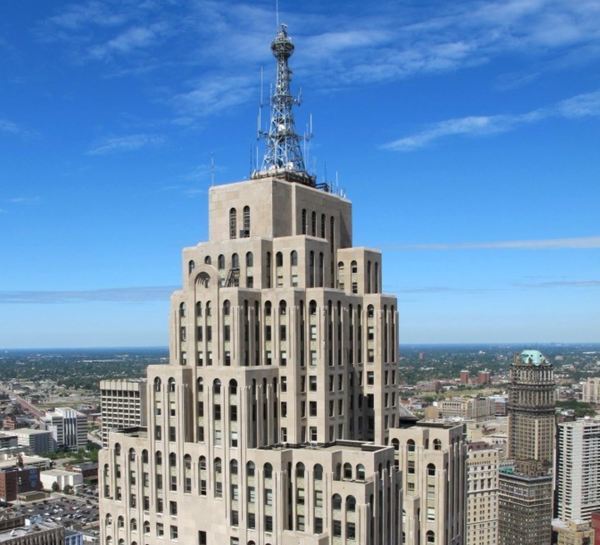