The Deutsches Haus is the most spectacular of Detroit's old ethnic halls.

Its grandeur displays the influence and wealth of Detroit's German community in the 1920s. The building, near Indian Village, has a 1,600-person auditorium, meeting rooms and even a bowling alley. The three-story building cost about $750,000 to build, the equivalent of some $10 million today.

The building is in stunning shape, with incredible interiors. The exterior of the building is solid. It’s a rare unused Detroit building in stellar shape. Unlike some buildings in Detroit, the question is not its location, but use. This is on the cusp of a solid area. While the building was used as a church, it would require a sizable congregation to fill its auditorium. If turned into a Detroit Public Library branch (Indian Village lost its branch and has only a temporary location), one could envision lectures and programs in the auditorium with youth and afterschool activities in the bowling alley. Still, DPL has been closing branches, not expanding. Even with Indian Village's educated and upper middle class residents, it's unclear whether this would be enough. A joint rec center/library branch is another option. 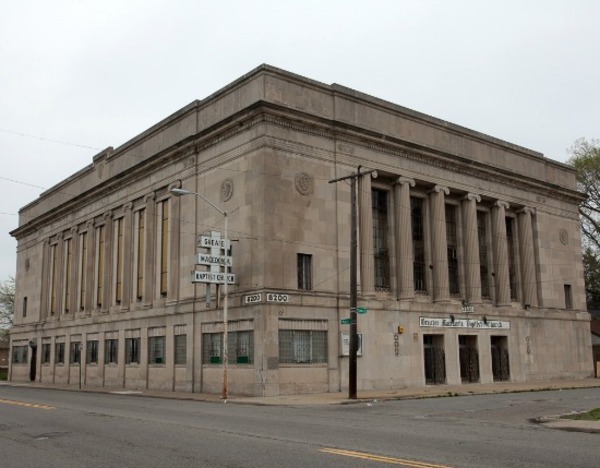