The Columbia was the first movie theater in the city of Detroit. And like many of the theaters that would follow it, was designed by C. Howard Crane.

The 1,006-seat theater opened Oct. 2, 1911, to a packed house. It was built in the city's entertainment district along Monroe Ave., full of live theater, vaudeville and nickelodeons.

The Columbia was also the first theater in Detroit to feature an orchestra providing the soundtrack to the film, as well as the first with an organ. It was also the first true moviehouse opened by John H. Kunsky, who also owned the city's first nickelodeon, the Casino. Kunsky would become the city's most successful movie theater operator, and he had Crane design many of his entertainment establishments.

When it wasn't showing films, it showed vaudeville acts.

The Columbia was an "alley jumper": You'd enter the theater on Monroe, buy your ticket and snacks, and then cross over the alley to the theater on the other side.

Long passed over by the glitzier movie palaces that followed in its trailblazing footsteps, the Columbia closed in 1956.

It's unclear the exact year it was demolished, but it came down before the rest of the historic Monroe Block in 1990. Do you remember when that was? Contact us at [email protected]. 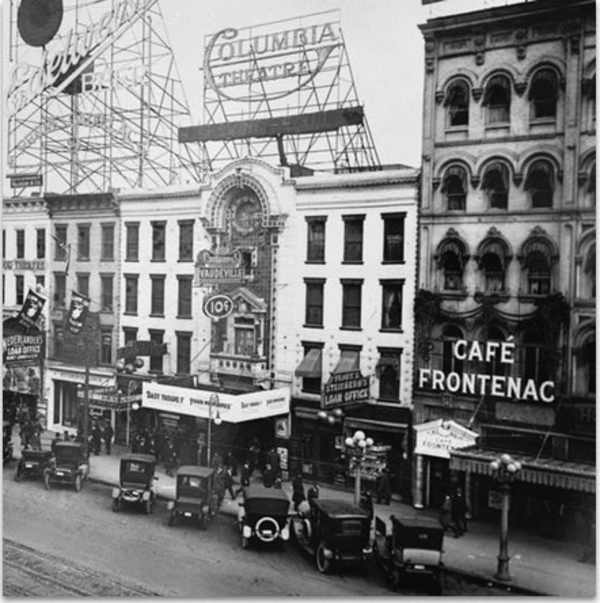