One of the city's most spectacular churches was left behind in the exodus for the suburbs for the vagrants to destroy.

Woodward Avenue Baptist Church was dedicated Jan. 19, 1887. Built on Woodward Avenue at Winder Street, the church was along a stretch once known as Piety Hill because of the number of churches - each an architectural marvel - dotting the avenue. On Sunday mornings, Detroiters would put on their Sunday best and fill the sidewalks along Woodward Avenue, many of them filing through the heavy oak doors of Woodward Baptist. Among those filling the pews of the gray limestone Late Victorian Gothic church were families whose names were to become part of the city's history: Olds, Palmer, Parsons, Standish and Trowbridge.

The congregation was founded on June 3, 1860, as the Lafayette Street Baptist Church by a group that had been meeting in the home of Caleb Van Husan at 175 Woodward. In 1880, as a result of what church records refer to as the "rapid expansion of the city northward" making the location of the Lafayette church "too far from the homes of our members, " the deacons set out to find a new home. In 1886, the church paid $22,500 (a rather sizable $493,000 today, when adjusted for inflation) for a lot on the southeast corner of Woodward and Winder. They instructed the building committee to build a church for its 400-plus members for a sum not to exceed $100,000 (about $2.2 million today). They blew their budget by $32,500 (nearly $766,000 today). The total cost was nearly $133,000 ($3.1 million). The church's congregation was the largest in Detroit when its new church was dedicated on Jan. 19, 1887, according to the building's nomination for the National Register of Historic Places.

The church's interior was one of the most breath-taking - and architecturally interesting - in the city. The building's National Register nomination gives the play-by-play: "The Greek cross-shaped auditorium has galleries on three sides supported by slender iron columns with Romanesque-style capitals. More iron columns support the fancy Victorian Gothic truss work at the ceiling. There are fine stained glass windows, handsome old wood pews, and a Gothic-style altar." Architect Mortimer L. Smith used narrow iron columns to support the galleries and roof trusses and gave the church a nearly square, galleried interior.

In 1935-1936, Woodward Avenue was widened, cutting into the church and changing its appearance. Other churches along Woodward, such as the Central United Methodist and St. John's Episcopal suffered the same fate. All three had a similar design, a gabled facade with a tall corner tower next to the main entrance. But in 1934, Woodward Baptist's 208-foot stone tower was razed, and 46 feet were cut off the front of the church and a new, rather plain facade was added. In place of the dramatic Victorian spire, two simple Gothic arched doors were installed. The Winder Street elevation was spared the Woodward Avenue mauling and maintained its original, multi-gabled style with large traceried windows. After the alterations, the church was 120 feet long by 90 feet wide.

As Detroit's population fled for suburbia, the congregation struggled to stay afloat. The Whosever Bible Class, Yoke Fellows and the Ladies Union and the King's Daughters continued to meet in the rich wood-paneled rooms located off the sanctuary. But in 1979, the church closed, citing yearly maintenance bills of $30,000 a year and a roof in need of a $17,000 repair. The congregation, whose once mighty numbers had dwindled to only a few, sold the church in February 1980 to the United House of Jeremiah, an east-side congregation. But soon, the House of Jeremiah, an independent congregation, gave up on the church, and the Woodward Avenue Baptist Church fell silent.

Sometime before dawn on June 23, 1986, a fire started in the church. The Free Press wrote that the "spectacular fire ... began at 4 a.m. and lasted into rush hour." The five-alarm blaze could be seen for at least 3 miles on I-75 and M-10, the Lodge Freeway. While there were no injuries to people, the fire proved fatal for the landmark church. The blaze ate its way through the beautiful sanctuary, consuming stained glass windows, ornate plaster and hard-carved wooden walls. Witnesses described how the fire caused the church's roof to collapse, sending up "a shower of sparks and shattered gray slate."

Legendary Detroit Free Press journalist Neal Shine wrote nearly a month after the fire: "The day after the fire, I stood in the ruins of Woodward Avenue Baptist, looked at the sky through the charred timbers that had supported the roof, and tried to imagine it as a place where people had once worshipped God. Where they had sung to Him as they did on June 23, 1910, celebrating their 50th year, their 25th year in that great church. Hymn No. 807. 'Now rest, ye Pilgrim host/Look back upon your way/The mountains climbed/The torrents crossed/Through many a weary day/From this victorious height/How fair the past appears/God's grace and glory shining bright/On all the bygone years.'" 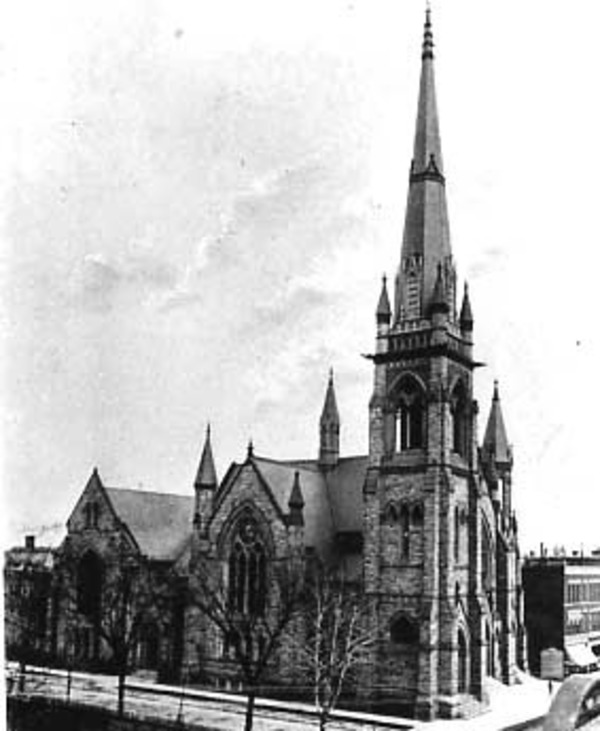