By ERIC BECKER for HistoricDetroit.org

The Wells W. Leggett House stood at the northwest corner of Woodward Avenue and Davenport Street, at 645 Woodward. This grand stone house, said to be one of the finest residences on Woodward, was built in 1883 at the cost of $48,000 (1.1 million today, when adjusted for inflation) by prominent Detroit businessman Wells W. Leggett.

The house was designed and constructed by William Scott & Co. at a time when, according to an April 1883 article in the Detroit Free Press, firms were “thronged with commissions;” attesting to the immense residential build-up of the city that took place in the early 1880s.

The house at 645 Woodward was a three-story structure built in the Romanesque Revival style with an appropriately sized matching two-story carriage house. The home was filled with stained glass and, while no known photographic evidence exists of its interior, the Detroit Free Press described it as “of beautiful interior design.”

Wells W. Leggett was born on June 8, 1847, in Ohio. At 15 years of age, he left to fight in the Civil War. In 1863, at the age of only 17, he was appointed a captain and aide-de-camp by President Abraham Lincoln and said to be one of the youngest ever to attain such a position. When the war ended, Leggett entered patent law with his brother in Washington, D.C. Shortly thereafter, he took up the position of United States commissioner of patents and later entered into business with his son and brother in Cleveland. In 1879, he came to Detroit and established his own prosperous firm. His offices, for a time, were located in the Burns Block of offices at 88 and 90 Griswold.

One of Leggett’s many accomplishments was introducing public electric lights to the city. Leggett was said by the Free Press to be of strict integrity but of a warm and genial social nature. At the time of his death, on May 14, 1891, he was president of the Brush Electric Light Co. His wife, Mary E. Leggett (née Porter), remarried four years after his death and died two years thereafter.

In 1899, in what was then one of the biggest cash transactions in Woodward Avenue history, 645 Woodward was sold to George A. Devlin for the sum of $35,000 (about $900,000 today). Devlin was a proprietor of a company which, among other things, sold toothache-healing gum.

Devlin sold 645 Woodward in 1906 to Edward Stair, president of Stair and Halvin Co., which represented more than 200 American theaters and other enterprises. The house was assessed at the time of the sale for $40,590 (roughly $970,000 today) and was traded for Mr. Stair’s former home at 595 Cass Ave. and a cash consideration.

Stair decorated the house in posters of Dixie Land and other productions of the time. Stair passed the house to Dr. James D. Kennedy and his wife, Pamelia Kennedy, (née Audette) about 1910. Dr. Kennedy was a practicing doctor in the city for many years before turning his interests to real estate around the time of the purchase.

Dr. Kennedy sold the home once more to investors who built up the front lot along Woodward Avenue with a three-story block of buildings containing six stores with flats and offices while leaving a narrow entrance to the house itself. The two-story carriage house was at this time replaced by a larger parking garage. The house was converted into the Gaynor Inn, of which little information is known.

The house presumably stood until it met its demise when Mack Avenue replaced it in the late 1950s. If the house still stood today, it would be at 3609 Woodward Avenue, following the renumbering of all street addresses in the city in the 1920s. 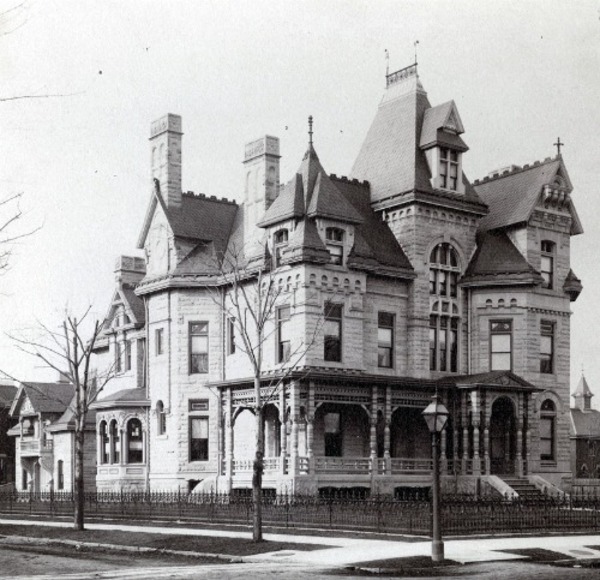