The fountain was erected in honor of William Kerr Muir, a former city park commissioner who helped turn Belle Isle from wild land to parkland. The city's parks commission gave permission to construct the fountain on July 22, 1896, and the City Parks and Recreation Board accepted the gift almost a year to the day later, on July 21, 1897. Its original cost was estimated at $3,000 -- about $92,000 today, when adjusted for inflation.

The 24-foot drinking fountain was designed and cut by the Harrison Granite Co. It had a foundation of granite from Barrie, Vt., with a pyramidal-style roof with two arches on two sides and four support columns. Carved near the top on one side was "W.K. Muir Fountain for the people" and "MDCCCXCVI" (1896).

While its main purposes was quenching the thirst of park-going Detroiters, it also had two half-circle horse fountains on either side. It originally stood west of the bridge approach.

The fountain was placed into storage in 1946, when a new bridge over the canal on Casino Way was proposed. As the decades came and went, the fountain was largely forgotten about. In the 1980s, it was at a storage yard on Belle Isle. A recreation department document said the fountain "would need historic conservation as well as replacement of missing pieces." There were 43 pieces - only 15 of which could be identified.

In 1987, a campaign was pushing to restore a number of Belle Isle's statues and monuments, and the Muir Fountain was included on the list. It was estimated that it would take $100,000 to $150,000 to replace the missing pieces and restore the fountain to the island.

As of 2019, its exact location is unknown. According to a 2003 letter from the chief of landscape architecture at the city's Recreation Department, the fountain was in a fenced cage at the Huber/Mt. Elliott storage facility, but it does not appear to be there anymore.

One of the horse troughs from the fountain still exists on the island, however, located behind the White House, on the east side of Inselruhe Avenue between Loiter Way and The Strand. 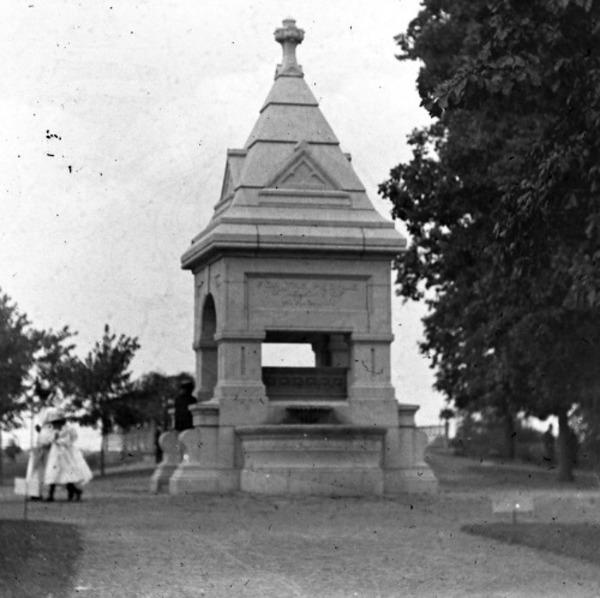