The Victoria was one of several ferries that took passengers between Detroit and Windsor, Ontario, across the Detroit River.

She was part of the Detroit, Belle Isle & Windsor Ferry Co. fleet, and built by Detroit Dry Dock for Capt. W. R. Clinton, of Windsor in 1872.

The wooden-hulled ferry was 96 feet long and 28 feet across.

The ferry was not just a cookie-cutter design, and featured an almost ground-up design. She was adept at breaking her way through the ice in winter thanks in part to her hull design and in part to her large and powerful engines. That design would help her serve a long life plying the river.

In 1904, the Victoria was extensively rebuilt and would continue to serve Detroit and Windsor, despite the introduction of newer, faster vessels to the fleet.

In 1911, the corporate existence of the Detroit, Belle Isle & Windsor Ferry Co. was terminated and all its assets were transferred to the newly incorporated Detroit & Windsor Ferry Co. The absence of Belle Isle from the title of the new company is significant, for that business was in decline. There had been a bridge to the island since 1889; by 1911 it appears that improved public transit and the advent of the personal automobile had reduced the ferry’s importance.

In 1915, the Belle Isle Bridge burned and the Detroit & Windsor ferries likely got a new lease on life, but with plans announced for what is now the Douglas MacArthur Bridge, the outdated Victoria was sold about 1920 for service on the St. Lawrence River.

In 1925, its Canadian owners dismantled her and rebuilt the vessel as a pile driver barge.

Just a year later, however, she was out of service and presumably scrapped soon thereafter. 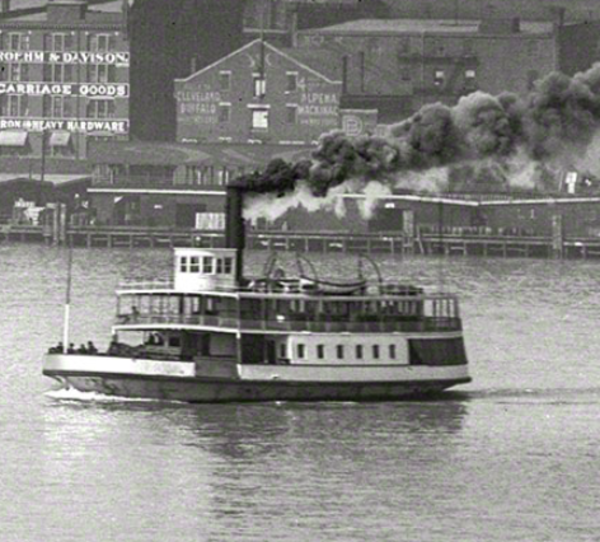