Ulysses S. Grant once called Detroit home. Fittingly, one of his homes still does, too.

The house is in the process of being evicted from the former State Fairgrounds site and will be hauled clear across town, possibly in 2016, likely near Eastern Market.

The house was built in 1837, making it one of the oldest structures in the city. For decades, the house was furnished in period styles and opened to the public as an attraction during the annual State Fair. But now that the fairgrounds are closed and the state is selling the land to developers, Grant's one-time digs have to go.

The state has been in talks about moving the house to the Detroit Edison Public School Academy's campus on St. Aubin, near Gratiot, but it's not quite a done deal.

"Details are still being finalized, but we are honored to bring this historic project to the DEPSA campus," Ralph Bland, the school's superintendent, said in a statement.

The house will definitely be moved, likely this summer, and will stay in Detroit, said Sandra Clark, director of the Michigan Historical Center, which is taking the lead for the state on the home's relocation.

There's also no final agreement on what the house will become, but one thing is clear: This won't be a shrine to Grant just filled with his things and photos.

"Today, we're thinking differently about historical homes and what's the best use for them," said Clark. The idea is to make "them an active educational tool for the school and the public, an interactive way to learn about the history of Detroit. ... We want to put history to work, if you will."

Grant was a young Army officer just four years out of West Point when he was transferred to the Detroit Barracks as regimental quartermaster of the 4th Infantry in the spring of 1849. Detroit was a tiny town at the time — with only 21,000 people. The future U.S. president and Civil War hero and his wife, Julia Dent Grant, lived in the house from April 1849 through May 1850, according to Kimberly Johnson, a Michigan Historic Commission member who has researched the Grants' time in Detroit. Another house that the Grants lived in during a later time in Detroit was demolished long ago.

"My dearest Julia ... I have rented a neat little house in the same neighborhood with (two of his fellow officers). In the lower part of the house, there is a neat double parlor, a dining room, one small bedroom and kitchen. There is a nice upstairs and a garden filled with the best kind of fruit. There is a long arbor grown over with vines that will bear fine grapes in abundance for us and to give away. There are currants and plum and peach trees and in fact everything that the place could want to make it comfortable. I will have a soldier at work in the garden next week so that by the time you get here, everything will be in the nicest order.

Jack Dempsey of Plymouth, president of the Michigan Historical Commission, has been working for years to save the historic structure, which has sat unused and neglected.

"Grant is an iconic figure in American history, a man who, before the Civil War, didn't have much success, but he went on to become the highest-ranking general in the war and saved the union," Dempsey said. "There are a whole number of Grant structures around the country, and Michigan is the only state that has treated one of them like this."

The fact that Grant is one of only two presidents to live in Michigan — Gerald R. Ford being the other — makes saving the house even more worthwhile, Dempsey said. Moving the home to near its original location is an added bonus.

Though there was little chance that the house will be demolished, the state has had a hard time finding a taker. Various ideas have been floated, such as moving it to Belle Isle, to Historic Ft. Wayne, even inside the Department of Natural Resources' Outdoor Adventure Center.

It was offered to Greenfield Village, which is home to a number of other historic structures but the museum in Dearborn declined.

"It was concluded that the building, and the stories related to it, did not meet our collecting goals," Christian Overland, executive vice president at the Henry Ford, said in a statement. "In addition, there are no current or planned programs in Greenfield Village that could make use of this building. The Henry Ford does not have the resources to dismantle and store a building that has no foreseeable role in its future exhibitions or presentations."

This won't be the first time the Grant house has hit the road. It originally stood at East Fort Street between Russell and Rivard, where Lafayette Park is today. When it was threatened by demolition, Michigan Mutual Liability Co. bought the house, moved it to the fairgrounds and presented it to the state as a gift in September 1936. The property was moved again in 1958, within the fairgrounds, to its present location.

So how to get a historic house from Point A to Point B? The home might have to be sliced in half to take it on the freeways or it will be moved some 8-10 miles along surface streets, with traffic lights and the like having to be lifted out of the way.

The move is "going to be complicated," Clark said. "We'd like to find a way to do it without using the freeways because of the overpasses. We'd like to keep the house whole. This is why we've hired an architect and professional movers."

A $222,000 grant has been secured to pay for the relocation and stabilization of the house, but there's no dedicated funding yet for restoring or rehabilitating it.

"Moving it is step one in preserving it," Clark said. "It's not falling apart by any means, but we do have a lot of work to do." 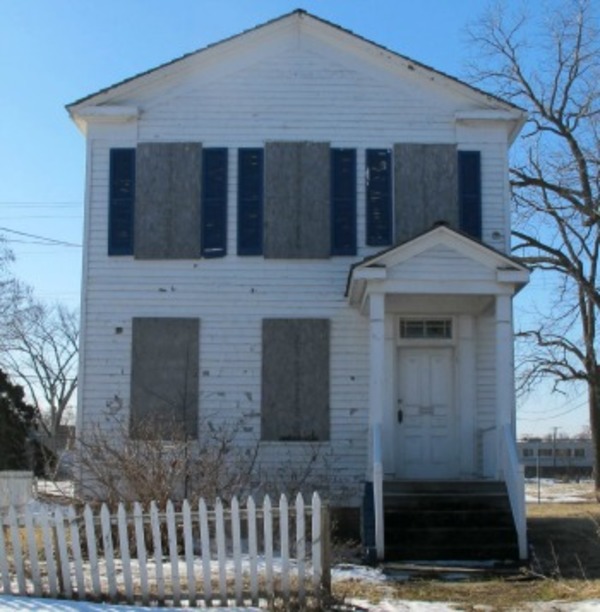