For Detroiters today, the name Tashmoo means sipping on suds in a German-style biergarten. But for generations of Detroiters before them, the Tashmoo was a proud, smoke-belching steamer that meant fun and relaxation.

The Tashmoo was a paddle-wheeler, and was launched Dec. 30, 1899. She was constructed by the Detroit Shipbuilding Company in Wyandotte, Mich., for the White Star Steamship Co. of Detroit. The 306-foot vessel made her maiden voyage on June 9, 1900. She would become one of the best known - and most beloved - excursion steamers on the Great Lakes. Indeed, the New York Times deemed her in 1901 as "Detroit's crack passenger boat."

The Tashmoo was designed by Frank E. Kirby, perhaps best remembered by metro Detroiters for designing the Boblo boats - the Columbia and the Ste. Claire. But he also is considered the greatest Great Lakes architect of all-time, was the father of modern ice-breaking technology and designed the D&C Navigation Co.'s armada of stately night boats, including the City of Detroit III.

The Tashmoo was equipped with a triple-expansion steam engine and, for its time, could really motor. It was so fast, in fact, that it was nicknamed The White Flyer. Because the Tashmoo had hundreds of windows lining her superstructure, she was also known as The Glass Hack.

It was Tashmoo Park that gave the steamer its name. However, the steamer would become so popular, many thought it was the other way around. The 60-acre park was located in the St. Clair Flats, about 20 miles north of Detroit on Harsens Island, and opened in 1897. The ride from Detroit to the park was a leisurely, relaxing two hours. And it was worth the wait, as The Detroit News noted, because the park is "as fine a summer playground as any city on the lakes could boast." For many Detroiters, a trip on the Tashmoo to Tashmoo Park was the highlight of the summer.

The Detroit News-Tribune noted: "One's first trip to the Flats is a red-letter day in life's calendar. This western Venice seems to be a spot where tired feet and dusty pavements are no more, but where the people float through liquid streets."

Over her nearly 40-year career, the Tashmoo gave everyone from inventor Henry Ford to President Theodore Roosevelt (in 1902) a lift on the Detroit River. The steamer ran between Detroit and Port Huron, Mich., and made several daily stops at Tashmoo Park while she was in the neighborhood.

There was an old tradition about steamships that giving it a Native American name was bad luck. And even though it served Detroiters for decades, it would have a number of run-ins with trouble.

On June 4, 1901, the Tashmoo competed in a race against the SS City of Erie in order to "determine the fastest vessel on the lakes." It was a bit of an odd challenger for the Tashmoo, as the Erie was built for lake service on the Cleveland-to-Buffalo run, not jetting up and down the Detroit River. Fortunes -- some $100,000 (about $2.8 million today, when adjusted for inflation) by newspaper estimates -- were wagered on the race. Crowds lined the waterfronts up and down the 100-mile course from Cleveland to Erie, Pa.

The New York Times said the race was "in many respects the most noteworthy contest ever sailed on fresh water." Detroit's "crack passenger boat" The City of Erie won by a mere 45 seconds, despite having less power than the Tashmoo (2,200 indicated horsepower to the Tashmoo's 2,500 IHP) and the Tashmoo drawing less water than the Erie. She was "built like a cigar, with a sharp tapering prow," the Spokane Daily Chronicle noted. Even though the paper was in Washington state, it still carried news of the race on its front page.

One of the more humorous stories from the Tashmoo's time on the Detroit River came when she ran away from home. The night of Dec. 8, 1927, saw a nasty winter storm with winds of 60 m.p.h. When White Star employees arrived for work the next day, they found that the steamer had vanished. Turns out, the gale had snapped the 14 heavy cables securing the steamer at the dock. The vessel had run away from home. It turns out she had drifted upstream, where she collided with the Douglas MacArthur Bridge to Belle Isle. Her injuries were minor this time, but it would not be her last brush with misfortune.

When the Great Depression hit the United States in 1929, the White Star Line's business took a tremendous hit. Dozens of pleasure steamers were laid up, including the Greyhound. The steamship line was renamed the White Star Navigation Co., but the slight name tweak didn't change the company's luck. Many Detroiters were losing their jobs and just didn't have the money to go to the park anymore. Businesses stopped chartering the boats for cruises. Things were looking bleak for the Tashmoo. Yet she managed to weather the Depression.

On Aug. 2, 1934, high winds blew the Tashmoo onto a sandbar near Squirrel Island, just across from the park. One of her paddle wheels was damaged, and passengers had to be unloaded onto tugboats. She was taken by tug to the Great Lakes Engineering Works in River Rouge for repairs and was back plying the waters of the Detroit River in about a week.

But on June 18, 1936, the Tashmoo finally met her misfortunate match. On that day, she was carrying about 1,400 passengers back to Detroit after an evening of dancing at Sugar Island when she struck a rock and began to take on water. Her crew was able to navigate to the Brunner-Mond Dock in Amherstburg, Ontario, where everyone safely made it off. The Tashmoo was not as lucky, sinking in about 18 feet of water. Initially, it was reported that the Tashmoo's wounds were minor and could be patched up. They were wrong.

The damage proved to be far worse than originally feared. And when a salvage crew came and tried to lift the Tashmoo from the riverbed, it "broke the steamer's back," likely a combination of the hull damage, the weight of the amount of water aboard the vessel and improper bracing and salvage strategy. The Tashmoo was dead.

Wrecking crews tore away at her superstructure about a month later, and her silt-covered hull was pulled by tugs to Boblo Island, where the engines were removed. She then made one final journey, to a River Rouge dry dock to be finished off, her hull cut down for scrap.

The White Star dock and offices where hundreds of thousands of Detroiters had boarded for a summer getaway were demolished in order to make way for the Veterans Memorial Building on Jefferson Avenue. The Tashmoo's pilothouse was saved and turned into a cottage near Chatham, Ontario, though it was destroyed by fire June 10, 1951. With the loss of its steamers, Tashmoo Park lost much of its charm. Business fell off drastically, and the park was closed in 1951. It would be sold and turned into a marina, though a couple of Tashmoo Park's original structures survive.

But the park's closure wouldn't be the last Detroiters would hear of the name Tashmoo.

In the fall of 2011, a group of entrepreneurs opened a European-style outdoor beer garden in Detroit's West Village neighborhood, at 1420 Van Dyke. The weekly events feature beer from microbreweries from across Michigan, and local vendors serve up food, like pierogi. You can find out more on this event here.

Much more on the Tashmoo to come. 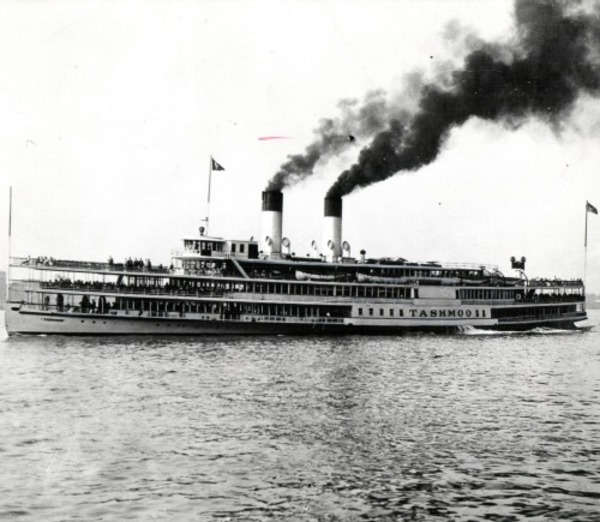