Adapted from the City of Detroit Historic Advisory Board report

Stanley Hong's Mannia Cafe is one of Detroit's most unique architectural designs, one of the few surviving buildings of the city's Chinese-American community, and was designed by one of the city's most prominent Black architects. Over its life, it went from serving Chinese cuisine to serving hot beats as the home of Detroit's rap movement of the 1990s.

The building was designed by Nathan Johnson, who broke new ground by opening his own architectural office in Detroit during the height of the civil rights challenges of the mid-1950s. Construction began in 1969, and the building opened in 1971.

All in the family

Stanley Hong came to Detroit with family from Canton Province (now Guangdong), China, in the 1930s, and first worked at a restaurant named Mun Fong Loo/Mungfung Low at 2728 St. Antoine. The Hongs achieved success in the restaurant business in Detroit; Stanley Hong operated three Chinese restaurants between 1940 and 2014: Stanley’s Mania Cafe at 565 E. Canfield at Hastings with his brother Oscar Hong (replaced by the Detroit Medical Center); Stanley’s Other Place at 2411 W. 8 Mile Road (1978-2014); and this location, Stanley’s Mannia Cafe at 265 E. Baltimore, with his brothers Oscar Hong, Peter Tong, and Henry Hong (closed in 1995).

According to Paul Vachon, author of "Lost Restaurants of Detroit," the Hongs were determined to reinvest in Detroit after the unrest of 1967. Coleman A. Young, a former classmate of Hong and future mayor, was present at the opening of the new restaurant in 1971. Brother Oscar, who lost his restaurant, the Ten Sheng Ten, to fire on West Warren, quickly rebuilt. He sold the business a few years later and joined his other brothers at Stanley Hong’s Mannia Cafe. Always a family business, Stanley’s wife, Fannie, helped to manage the restaurant. The business was known for always welcoming African Americans as customers, at a time when not all businesses in the city did so.

Even the brothers' children frequently helped throughout the years by answering the phones, operating the cash register, packing carryout orders, or cooking. Sometimes, on late nights after the restaurant closed at 3:30 a.m., these cousins would relax by playing baseball in the parking lot. The restaurant would employ as many as 80 people, Chinese cooks and African-American waiters and waitresses, many of whom became good friends of the Hong family.

The lavish Stanley Hong’s Mannia Cafe came together as a result of the relationship between Stanley Hong and Johnson, the architect. In 1962, Stanley Hong entrusted the design of his family home to Johnson, who lived nearby and produced a thoroughly modern house for the Hong family at 961 W. Boston Blvd., on the corner of Hamilton.

Following its opening in 1971, Stanley Hong’s Mannia Cafe was the scene of several events of cultural significance or interest, particularly in the area of Detroit’s entertainment history. The Temptations practiced there early in their careers; as mayor, Coleman Young frequented the restaurant as a good friend of Hong’s, and Aretha Franklin and other famous sports and recording stars often Detroit's dined there.

In its later years, a new chapter was being written in Stanley Hong’s Mannia Cafe — that of the Rhythm Kitchen. Founded by clothing designer Maurice Malone around 1991, one night a week the restaurant was transformed by promoters into a music club featuring reggae, jazz, and classics, and, according to Paul Rosenberg, became “the original epicenter of the rap music club scene in the early 1990s in Detroit." The hip-hop event Rhythm Kitchen was born as a weekly underground night held at Hong’s throughout most of the '90s, which most notably saw the rise of rapper Eminem as he participated in rap battles with several other local rappers of notoriety.

After Stanley’s Mannia Cafe closed in 1995, it stood vacant for a short time. Between the early 2000s and 2012, the building was sold to two different church congregations — Omega Baptist and Grace Fellowship Church, respectively. During these years, original interior features were removed. By 2013, the building was left abandoned, its interior gutted of most original features.

Googie but not bougie

Stanley’s Mannia Cafe is a rare Googie-style building in the city of Detroit. Googie, a dramatic and sometimes outrageous variant of the modern style, was popularly used in the design of restaurants, coffee shops, bowling alleys, drive-in theaters, motels and other road-side architecture in the 1950s and '60s. Influenced by space-age themes and futuristic designs, the Googie style became a part of the car culture of the times. The characteristic boomerang arches, tapered columns, cantilevers, parabolas, curved domes and free-forms became instant marketing for new commercial businesses meant to be instantly recognized from a moving car. Originally a Southern California phenomenon, the term “Googie” was taken from the name of a coffee shop that exemplified the style in West Hollywood, designed in 1949 by John Lautner, a student of Frank Lloyd Wright. The flamboyance of Googie architecture expressed the post-WWII optimism that swept the nation. However, by 1970 a cultural shift toward a new Post-modernist traditionalism prevailed in commercial design, best witnessed by the iconic Golden Arches of McDonalds, giving way to the brick-walled, mansard-roofed designs that followed.

According to architectural historian Dale Gyure, the design of Stanley’s Mannia Cafe "utilizes a concrete structural system to create an animated yet graceful rhythm across the facade; the use of the building’s structure as decoration was common to this era and can be seen in many of the works of Minoru Yamasaki, the world-famous Detroit-area architect." Brian Conway, Michigan’s State Historic Preservation officer, calls it “a strong vernacular example of organic architecture in the tradition of Eero Saarinen’s Yost Ingalls Hockey Rink at MIT or William Kessler’s Savings and Loan Building in Mt. Clemens, Mich.”

Stanley Hong’s Mannia Cafe was erected under the City of Detroit building permit #35615, issued to Stanley Hong for a masonry restaurant, one-story tall, with dimensions of 76 feet by 98 feet to cost an estimated $150,000 on June 10, 1969. A rear vestibule entrance was added in 1972. The building is described in the Historic Structure Report prepared by University of Detroit Mercy. Much of its architectural description is taken from that report.

The Googie-style, modernistic building is composed of exposed concrete block on the unadorned rear (north) and east elevations; other materials include particle board, sheet metal, and thin cast concrete. Downward facing parabolas create rows of arches resulting in the wave-like roof ends, five bays along Baltimore (south) and six along the parking lot on the west. The peaks of the half-arches meet at the corner entrance and rise into a tall concrete corner tower, originally displaying the name of the restaurant. The inverted parabolas are smooth cast concrete, with approximately 12 feet of void space between. Each arched area forming the wall surfaces of the east and south facades are filled with a precast panel of concrete and coarse aggregate mixture.

According to the UDM Report, five diagonal glass strips on either side of the entrance meet at the entry corner, with entry doors on either side underneath the high end of the diagonal glass panels. The glass panels are currently boarded up but still intact and framed in black steel. The entry doors are approximately 36 feet in width, framed out by black structural steel members that help support entry tower.

Facades that were formerly cream color have been almost completely covered by dark gray spray paint as a means of buffing the graffiti that covered the exterior surfaces of the building. There is a second door on west side of the building, at the rear – it was originally used for a "take out" entrance; there are two entries for deliveries on the north side of building; and one additional egress at south end of the east facade.

The roof system is composed of Steel I-beams and girders that supported corrugated metal decking and an insulation layer, which was then finished with roll out rubber and tar. The roofing material wraps up to cover the backside of the parapet (rising 25 feet above the roof line) on the north and the east sides of the building, and on the embellished south and the west sides, the roofing material slopes up to meet and partially cover the backside of the inverted concrete parabolas - peaks of which rise approximately 18 inches above roof line.

The Detroit Catholic Pastoral Alliance, a nonprofit dedicated to creating affordable housing and aiding Detroit's comeback, paid $320,000 for the building in May 2017. It ensured the building was secured, but did not reopen it. To help increase the chances of its redevelopment, the building was placed in its own local historic district in 2018.

In February 2021, it was announced that Jen Lyon, a co-founder of the Brooklyn Electronic Music Festival, had bought the building for $750,000, and planned to create cultural and hospitality space in the building.

Lyon, who moved to Michigan with her family around 2016, said she is working with The Right Productions, which operates and manages the Aretha Franklin Ampitheater on the Detroit riverfront, on the project, which she said is still in its early planning stages.

"It's an important space to take care of," Lyon, also the owner of MeanRed Productions, an independent music promoter, told Crain's Detroit Business. "The architecture should be honored with a restoration." 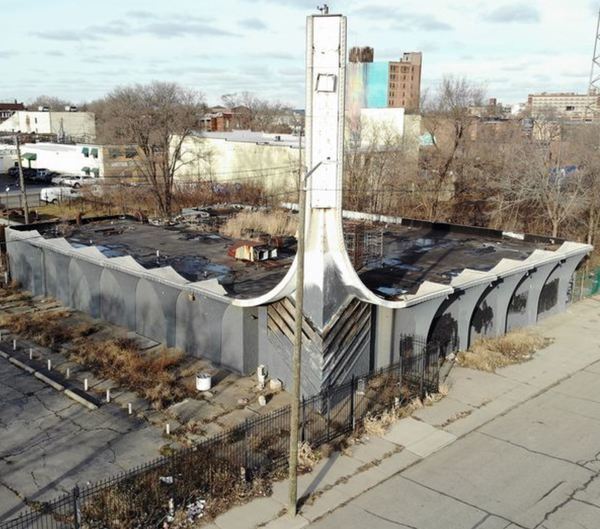