Here is a history of the building from from StMatthewDetroit.com:

St. Matthew Church is built in the form of a crucifix, with a semi-circular sanctuary, a style of Christian architecture which has been popular since the earliest days of the Church. All through the Christian era, symbolism has been used conspicuously in church architecture. It is recorded that the early Christians used symbols to decorate the catacombs outside the city of Rome. Following this precedent, a certain amount of symbolism is used in St. Matthew Church.

The church was built in 1954 by Donaldson and Meier. It is a modern interpretation of Romanesque. The exterior is of crab orchard stone in shades of buff, tan, and brown, laid in various thicknesses. The trim is of Indiana limestone. Granite is used for all entrance steps and sills. Marking the main entrance portico are rose red grant columns from Sweden. In the gable of the main facade is a sculptured figure of St. Matthew, patron saint, in stone. The pitched roofs are covered with red shingle tiles. Copper covered domes surmount the two towers at the front of the building.

The church will seat nearly 1,200 persons.

The pulpit, of imported marble, has carved panels in a grape vine design which signifies the Blood of Christ and the Sacrament of Holy Eucharist.

The three manual and pedal pipe organ was specially designed by the Wicks Organ Co. for St. Matthew Church. The instrument consists of 21 ranks, which include a total of 1,464 pipes.

In October of 1954, Father Fillion sent a check in the amount of $2,236.00 as a down payment to begin work on the construction and installation of the "King of Instruments". The installation was completed in September of 1955. By the end of that same month, Fr. Fillion and parishioners had the entire bill paid off. A sum of $22,364.00 had been exchanged for an aural beauty - the sound and support which delighted the faithful of St. Matthew Church then and for generations to come.

The name "Matthew" is derived from a Hebrew word which means "the gift of God". We read in the Gospels that Jesus saw a man named Matthew sitting in the tax collector's place and said to him: "Follow Me." According to Mark and Luke, the name of the man called was Levi. As was the Jewish custom, our patron bore two names - Matthew Levi. The Gospels intimate that he was wealthy and possessed some education at the time of his calling.

St. Matthew wrote the first canonical Gospel between the years 70 and 100 A.D. in the Aramaic dialect of the Hebrew language.

The shrine statues are of marble and and the clothing made of colored marble entwined.

The focal point of a Catholic Church. The altar upon which the great act of sacrifice is offered. Everything in the entire Church is meant to focus attention on the altar. A Catholic Church would not exist if it were not for the altar within its walls. Stations of the Cross, ornament, and statuary must not detract from this primary consideration. In front of the Blessed Sacrament altar, which is of imported marbles, is a bas relief of Leonardo da Vinci's "Last Supper". On both sides of this are colored marble inserts of the Alpha and the Omega, the first and last letters of the Greek alphabet. These letters signify that Jesus is the beginning and end of all things.

The large window facing the rectory is composed of three separate windows detailing the Crucifixion of our Lord.

On the lower windows are depicted St. Augustine and the Bishop's Mitre and St. Thomas Aquinas and the Sun.

The large window on the Harper side of the Transept is like-wise three separate windows depicting the Resurrection of Jesus from the dead.

In the lower windows are depicted St. Bonaventure and the emblem of the Franciscan Order and St. Jerome, the writer of the Bible in Latin, shown with Book and Cardinal's Hat. 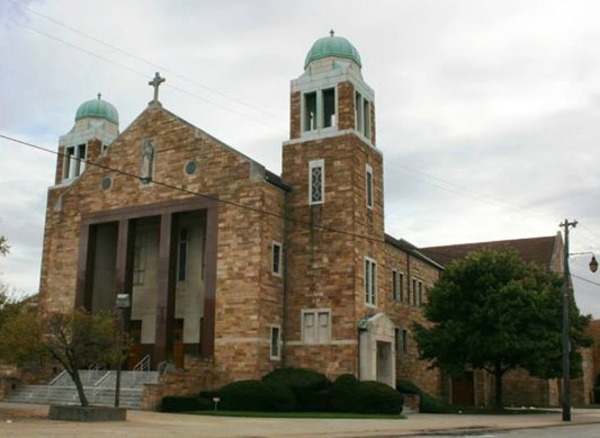