St. Andrew’s Memorial Episcopal Church has survived both the construction of the freeways and Wayne State University’s expanding campus.

Once a neighborhood church, the homes and streets are long gone, replaced by shaded sidewalks and university buildings. Built more than 100 years ago in the English Gothic style, the church has unusual stained glass windows, honoring people from banker Joseph Dodge to WSU President Clarence Hilberry. It’s had a strong connection to music, as musical programs have been held in the church since the 1960s.

After being purchased by WSU, the church was carefully restored and now hosts musical performances from the university’s fine arts program.

This church has nothing to do with the concert venue downtown, near Greektown.

The Episcopal congregation dates back to the 1880s. On April 5, 1885, a Sunday School class was organized in a small cottage on Merrick Street, with 13 children and nine adults attending. The next year, Bishop Samuel Smith Harris led the first congregation in a frame-built chapel constructed on Fourth and Putnam. The land was donated by a friend of the bishop. This is the site where the current St. Andrew’s itself would later be built. After his death in 1888, the diocese decided to built a chapel in his honor.

Five years later, construction began on the church. The church was designed by the Boston-based architecture firm of Cram, Wentworth & Goodhue. The main architect, Ralph Cram, was heavily influenced by English Gothic styles. Cram, a well-regarded architect, also designed the St. Paul’s Episcopal Cathedral in Detroit and St. Thomas’ Church in New York City. This would be his first commission outside Massachusetts.

However, issues with funding kept the construction from preceding quickly.

Ground was broken for the church Nov. 30, 1894, — on St. Andrew’s Day. Though the date on the cornerstone is 1898, the date it was laid is uncertain. The church was dedicated Nov. 7, 1902. The chapel alter inside was dedicated to the memory of Harris, and the alter cross was in memory to children killed in a fire in a neighborhood school. Originally, the stained glass windows came form the Lamb Studios in New Jersey. Inside, the clerestory was 42 feet deep, the choir section rather large — 27 feet — which was unusual at the time for Episcopal churches.

Soon after it was built, however, a fire damaged the church. In 1906, that fire led to the removal of the tower and clerestory. While the church was rebuilt (church goers attending services on Fourth Avenue), it retained the original simplicity of the Gothic style. The inside has gray brick, Berea sandstone, and oak ceiling and floor. However, after the fire, a number of columns inside were removed to improve seating. The windows were still framed with Tudor-style arches, and the chancel windows, with three large panels of glass, would later be replaced by stained glass.

The pews in the church are from after the fire, as original church goers sat on folding chairs. In 1914, an organ was purchased, with help from the Carnegie Foundation. The rectory, to the west of the church, was torn down in 1923, and was replaced a more up-to-date three-story building, including a kitchen and other amenities, such as a dining room.

There were several Detroiters of note who supported the church financially, both during its founding and its formative years, such as lumbar and coal merchant Frank C. Trowbridge; Harvey Parke, co-founder of pharmaceutical company Parke Davis & Co; and Fred Wardell, founder of Eureka Vacuum Cleaners. Wardell not only provided financial support but he also provided free lodging for the rector at the Wardell Apartments (now the Park Shelton.) His house at 18210 Fairway was donated to the diocese for a bishop’s residence.

The neighborhood around St. Andrew’s began to change dramatically after World War II. A young Wayne University began buying up city blocks and converting them into a college campus. Next, in the late 1950s and early ‘60s, the Lodge freeway was completed, running a block away from the church. Then in the mid-1960s, Wayne State’s controversial urban renewal program took out the neighborhood where Matthaei Athletic complex now stands.

However, the church’s closeness to the university helped saved it. Gradually, the church became more of a student parish. Wayne’s United Christian Fellowship was housed in the the church in the late 1940s and ‘50s, and included four denominations in addition to Episcopalians. The Canterbury Club, a WSU ecumenical organization, was active in St. Andrew’s. In 1969, Women of Wayne opened a child care complex in the church’s annex, which was open until the 1980s. Given its ties to the university, the church often hosted special memorial services for people affiliated with Wayne — the first in 1975, sung by the Women of Wayne.

The church continued to hold services every Sunday. “The Introit and the hymns used at today’s service are the same ones as were used just 60 years ago on the 9th of November when the Benediction Service was held for the newly completely St. Andrew’s Church,” said a church program dated Nov. 11, 1962.

The stained glass windows got some new life. In 1967, a Jewish comic book publisher, Harry Donenfeld, who helped popularize Superman and Batman, was posthumously honored by a stained glass window. The donor of the window, Ivan Ludington, was his friend and active church member, who said that “both the current ecumenical movement and Donenfeld’s character prompted the donation.” Another window honors Harry Henderson, founder of Brighton Hospital, in addition to the aforementioned windows for Dodge and Hilberry.

However, when Wayne State built the Student Center building in the late 1960s, that building included space for church services, and Wayne’s chaplains moved. So, church attendance at St. Andrew’s began to decline. In 1976-77, the church served about 70 households, had 120 baptized members, and the average Sunday attendance was 50 people. In 1983, the church’s organ player was a graduate student at WSU. According to a 1986 South End article, there were just 20 active parishioners, and the church “looks almost abandoned during school hours.” Still, the church clergy remained active. In 1986, Father Reinhart was active with AIDS patients and their families, as the church offered support groups, and St. Andrew’s rector Bill Wood helped sponsor programs for international students who needed financial assistance at WSU. The church did share its space with the Korean Presbyterian church, but the church’s finances were still a problem.

The church’s final service was held in November 1988.

The university took an interest in the former church, which was now tucked behind WSU’s Manoogian Hall and General Lectures building. As the church didn’t have the funds for repairs, the church badly needed attention. Wayne State purchased the building in 1989 for $185,000, and work began in June 1993. The diocese used the money from the sale for neighborhood projects in the Cass Corridor.

The university purchased the church because it had good acoustics for musical performances, and they also added in the space for a lecture hall. The rectory was torn down, and the wall resurfaced with sandstone to match other walls. (The sandstone bricks came from the same quarry as the originals.) The walls were cleaned, new shingles added to the roof, rotting wood frames in the windows replaced, a new maple floor for the altar, and the nave was covered with a red carpet. In addition to a handicapped accessible ramp, new technology was added: a sprinkler system and a video system.

The restoration ended up costing $1.6 million, and was designed by Ghafari Associates, of Dearborn, Mich., which is led by a WSU alumni. The work was carried out by Excell Construction of Pontiac, Mich. with 180 to 240 seats, depending on the event.

Though the church once stood on the corner Fourth and Putnam streets, it is now listed at 918 Ludington Mall, one of the sidewalks of WSU’s campus. The building is listed on the National Register of Historic Places. And for Wayne students who have had classes in Manoogian Hall, one can sometimes hear faint chords of music as they walk by the church. 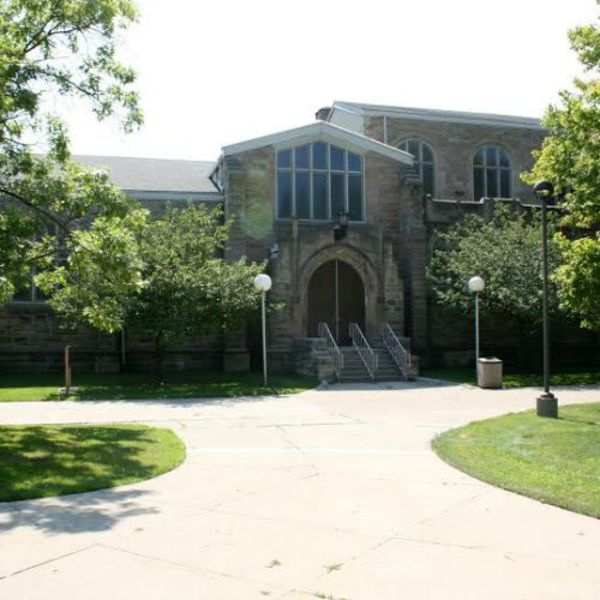