She was known as "the Queen of the Great Lakes."

The South American and her near-identical fleet mate the North American were popular sights as they took passengers on cruises around the Great Lakes. They made regular runs to Buffalo, N.Y.; Cleveland; Mackinac Island; Chicago; Duluth, Minn.; and Detroit.

The South American was launched Feb. 21, 1914, at the Great Lakes Engineering Works in Ecorse, Mich. Miss Dorothy Bour of Chicago broke a bottle of wine across the bow at 11:30 a.m. She was built for the Chicago, Duluth & Georgian Bay Transit Co. She was 290 feet, 31 feet longer than the North American.

On Sept. 9, 1924, the South American caught fire while laid up for winter at Holland, Mich., destroying her upper works. She was rebuilt and, while construction was under way, she was converted to oil-fired boilers instead of coal, and a second smokestack was added. In spring 1925, the rebuilt South American returned to her regular service between Buffalo, Chicago, Cleveland, Detroit, Duluth and Mackinac Island.

In 1967, her final year of service, she shuttled guests to Montreal’s Expo ‘67, a last gasp of glory. On Oct. 16, 1967, she left Detroit for the last time, making her the last of her kind to sail out of the Motor City. The era of American overnight passenger steamers on the Great Lakes had officially come to a close.

The North had been retired from service in 1963 and languished until being sold to the Seafarer’s International Union three years later in order to be used as a dormitory and classrooms at Piney Point, Md. However, on Sept. 13, 1967, while being towed to her new home, she sank in the Atlantic Ocean.

After the sinking of the North, the South was sold to the Seafarers as a replacement. But the conversion never came, and she rotted for decades near Camden, N.J., before finally being scrapped at Baltimore in 1992.

It was truly an ending unfit for a "Queen."

View this video of archival footage, including the farewell remarks from her final departure from Detroit on Oct. 16, 1967, as well as footage of her shortly before being scrapped. 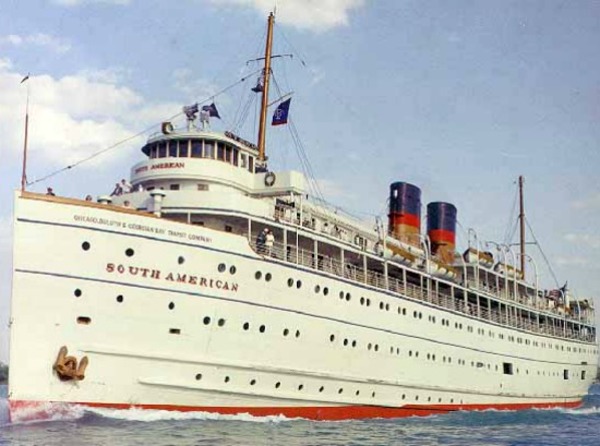