The Russell A. Alger Memorial Fountain stands on the east side of Grand Circus Park. The monument features a bronze statue of a woman about 7 feet tall wearing a headdress and a flowing gown and carrying a sword and a shield that bears the state seal. Her right hand is raised in greeting. She is the bronze personification of the state of Michigan.

Alger is depicted on the memorial on a bas relief on the granite pedestal, surrounded by laurel. Lion heads on the pedestal spit out water. The base of the memorial is inscribed "Russell A. Alger -- Soldier -- Statesman Citizen -- 1836-1907."

Alger was a lumber baron and railroad man who rose to become a U.S. senator and later was governor from 1885 to 1887. He unsuccessfully sought the Republican nomination for president in 1888. Alger later served as President William McKinley's secretary of war, and when the president was assassinated by Leon Czolgosz -- a Michigan native and former Detroiter -- on Sept. 6, 1901, Alger said: “The root of anarchy which has been started in our country and which has resulted in the loss of a president should be stamped out. It is our imperative duty to stamp out the evil.”

Alger died in 1907 and was entombed in Elmwood Cemetery. Alger County in Michigan is named for him.

Five years after Alger died, the Alger Memorial Association was formed in an effort to pay him tribute. The Civil War veterans also worked on the project.

The association selected Henry Bacon and Daniel Chester French for the job. The New York City firm Presbey-Leland Memorials served as contractors, and the statue was founded by the Gorham Manufacturing Co.

There was some controversy over where to erect the statue until it was agreed it would stand in Grand Circus Park. The disagreement delayed the project, and work did not begin until 1919. Two years later, on July 27, 1921, the fountain was officially unveiled, 14 years after Alger had died.

The team of Bacon and French is best known for doing the Lincoln Memorial in Washington. Bacon was the architect of the pair. He is best known for his monuments, but he also designed everything from libraries to train stations to churches across the country. In May 1923, Bacon was awarded the American Institute of Architects' Gold Medal by President Warren G. Harding. Bacon was the award's sixth recipient.

The Alger statue was sculpted by French, a key 19th-Century American sculptor who also was responsible for the the Minute Man statue in Concord, Mass.

The statue's bronze plaque was stolen in the 1970s, and its sword was swiped, as well. A renovation in 1997 replaced both of the missing items with replicas. 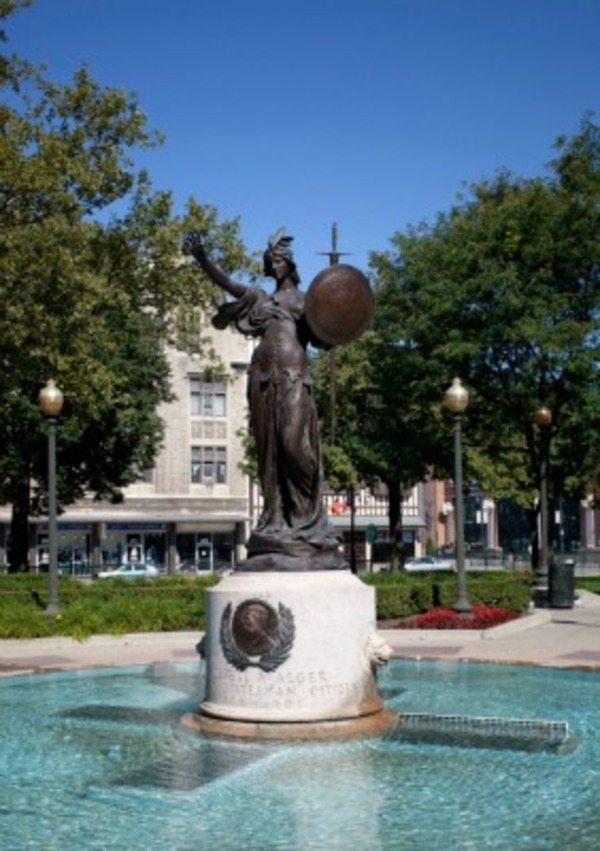