It is one of Detroit's oldest and most beautiful houses.

The house was built between 1876 and 1878 for Ransom Gillis, a wholesale dry goods merchant. It was designed by Henry T. Brush and his assistant, a young George D. Mason. Mason would go on to become one of Detroit's most prolific architects.

The Ransom Gillis House brought the Venetian Gothic style made popular by John Ruskin's book "The Stones of Venice" to Detroit. The centerpiece of the structure was the turret in the front left corner. It was accented by five rows of tiles of simple geometric designs in hues of bright blue, red, yellow and brown. Similar tile work was spread throughout the rest of the structure. The base of the turret was decorated with stone carvings of quadruplets of flower blossoms, similar but all slightly different. The turret was supported from below by an ornate stone post. Dark ornately carved wooden columns enclosed the porch at the entrance to the house. A steep, dark slate mansard roof with ornate iron cresting completed the peaks in a traditional detail of the day.

Gillis sold the property in 1880, shortly after it was built. The house and property passed though the hands of four upper-income families between 1876 and 1919. After this time, the main structure was converted into a rooming house, as were most of the other structures on the street. The home's carriage house was rented by Mary Chase Perry Stratton in 1903, becoming the first home of Pewabic Pottery. The pottery left the carriage house in 1906, and it was then occupied by an auto repair shop, a battery service shop and finally a filling station before it was torn down and replaced by a restaurant in 1935. The restaurant operated until the 1960's and was torn down in 2005 or 2006 as part of the city's "mothballing" work on the property.

A storefront was added to the front of the Ransom Gillis House in the late 1930s and was operated along with the rooming house until the mid-1960s.

Various attempts were made to restore the main structure in the 1970s, 1980s and mid-2000s, none of which succeeded.

But on March 24, 2015, Nicole Curtis of the HGTV show "Rehab Addict" announced that she would spruce up the Gillis House. Given the home's location near Comerica Park and the soon-to-be-built Detroit Red Wings hockey arena, the metro Detroit native told WXYZ-TV that she "finally found a way to make the numbers work." She set out to completely renovate, though not restore, the mansion, including its iconic turret.

The rehab was part of a larger redevelopment plan of Brush Park that is expected to see hundreds of new residential units built, as well as retail and green space. The largest partner in the project is Bedrock Real Estate Services, part of Dan Gilbert's empire.

A little more than seven months later, on Nov. 1, a line that stretched for blocks queued up to get a peek inside the restored mansion. By 2:30 p.m., the Detroit News reported, "the line to get in the house snaked from the steps of its porch to the sidewalk on Alfred Street to Brush and then down Edmund Place, up the other side and back to Brush, stopping just before Watson Street." 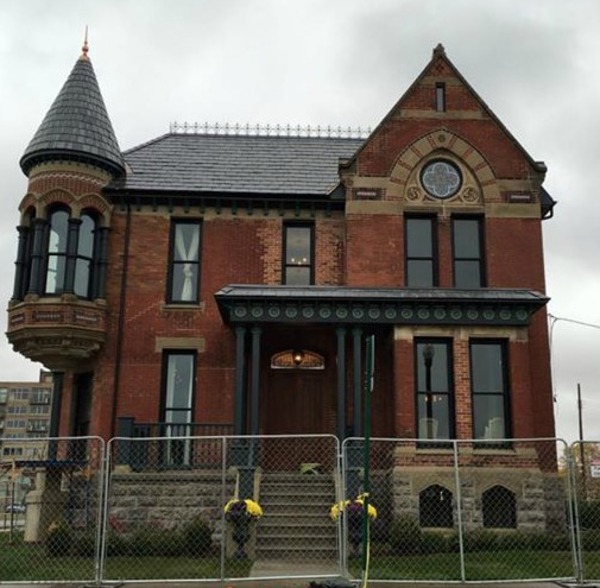