The Williams C. Rands House is one of the four “survivors.”

Only four homes located in the neighborhood destined to become Wayne State University’s central campus remain standing today. Most of those homes were constructed in the 1920s for Detroit’s growing middle class. For example, Ty Cobb owned a house in that neighborhood, and Michigan governor G. Mennen Williams grew up in a home in the neighborhood. As the university expanded, it purchased homes and property in the area around Old Main. Eventually, WSU acquired several blocks through eminent domain, and began to tear down the old homes to build classrooms and research buildings.

However, four of those houses survived the wrecking ball. Over the years, the homes have served a variety of educational purposes, like classrooms, labs, offices space, and art studios. All four “survivors”— the Williams C. Rands House, the Frederick Linsell House, the Max Jacobs House, and the Herman Strasburg House— have been converted into university use and lovingly restored. Also, they’re all listed on the National Register of Historic places.

William C. Rands, who began in the bicycle business and then moved into auto-parts manufacturing— supplying parts for cars like Ford’s Model T— had this house constructed in 1913. Williams Rands was born in London in 1872, and came to the U.S. in 1884. When he arrived, he lived with his father in Rhode Island, until his father was killed in a street car accident. A teenaged Rands was expected to provide for the family— and so he began riding a bicycle to and from work. In 1985, he left the east coast for Detroit, and won several bicycle races on Belle Isle.

After he left racing, Williams became a bicycle dealer, and later founded Wheeler Manufacturing Company, which made bicycle parts. However, as cars were overtaking bicycles in popularity, in 1913 he switched the auto parts, opening a company called Motor Products in 1913. It was then he had this house built. The Rands house is distinct, because unlike many of the Victorian and Arts and Crafts homes in the area, it was built in the Prairie style. The asymmetrical, two and one-half story house was designed by architect David Spicer. The homes has three chimneys, slate shingles, extensive quoining around the corners and window frames, and it built from limestone. While the inside has been remodeled over the years, a Pewabic tile fire place stands where the living room once was. The Rands family only occupied the home until 1917.

The second owner of the house was John A. Mercier, who operated a general contracting company and became involved in sewer construction, street paving, and brick manufacturing. In 1913, he was named Commissioner of Public workers by the mayor. From 1933 to 1944, the house was remodeled extensively, being turned into offices and a printing plant for a publishing company. In 1934, a two story addition was constructed in the back of house, connecting it with the original Prairie-style carriage house.

In 1944, the Detroit Board of Education purchased the block on which the Rands house was located. In 1946, the house was converted into offices and classrooms. During the 1950s, it served as the Law School. In the late 1990s, it was renovated and linked to a new office building. It was officially dedicated as the School of Business Administration in 1991.

The home remains significant as one the surviving structures from the neighborhood that grew up around Old Main. Further, it’s a rare example of the Prairie style of design that was popularized by Frank Lloyd Wright. 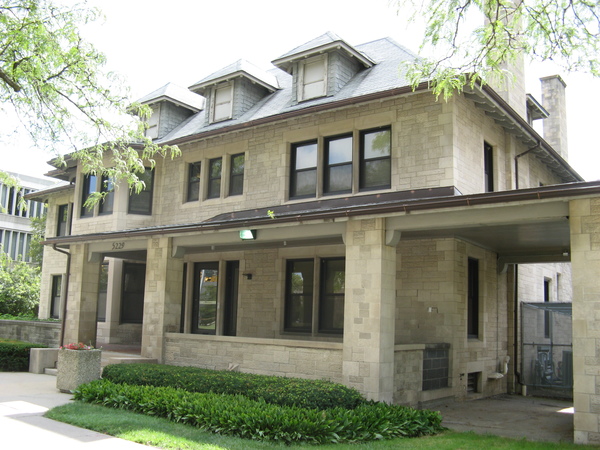