The Promise had the distinction of being the first steamer to carry pleasure-seekers to Bois Blanc Island, or as many generations would later call it, Boblo Island.

Ferry service between Detroit and Windsor began in the early 18th century. Among the many ferry operators over the years was William Campbell, whose ferry Gem entered service in 1864. His family became one of the most important and successful operators, with the Campbells controlling the Detroit, Belle Isle & Windsor Ferry Co., which had been formed in 1881.

This ferry service, as the name implied, ran between Detroit, Belle Isle and Windsor, Ontario, across the Detroit River.

In 1892, the Detroit, Belle Isle and Windsor Ferry Co. built the steamer Promise with the intention of running from downtown to Belle Isle. The Promise could make the run in about 20 minutes; a trip across the Detroit River to Windsor, Ontario, took 10.

The Promise was designed by master naval architect Frank E. Kirby, and was 130 feet long and 38 feet across, with a capacity of 2,000 passengers. The boat was often loaded to capacity, with throngs of Detroiters cramming aboard to make it to the island getaway during the hot summer months. So much so, in fact, that the steamship company built another vessel two years later to help handle the load, the Pleasure, which was based on the plans of the Promise, though 10 feet longer.

In 1898, the ferry company leased Bois Blanc Island, located 18 miles downriver from Detroit in Canadian waters. On June 18, 1898, Bois Blanc opened to the public, and the Promise was the first to take recreation-seekers there. The island park quickly became a wildly popular getaway and amusement park. In 1901, the ferry company bought a majority of the island. Its popularity proved so great, a year later, the ferry company built the largest ferry steamer on the Detroit River for excursion service up until that time, Columbia. Columbia, with a capacity of 3,500, was designed specifically for the Bois Blanc run, and entered service July 8, 1902. Columbia was followed by other fleetmates, including the Britannia, in 1906, and Ste. Claire, in 1910. These larger vessels took over the Boblo run, and the Promise was relegated to cross-river runs between Detroit and Windsor and from downtown to Belle Isle.

In 1911, the company reorganized as the Detroit & Windsor Ferry Co., with Belle Isle no longer a major part of its business with more Detroiters driving automobiles across the Belle Isle Bridge, built in 1889.

Then the creation of the Ambassdor Bridge in 1929 and the Detroit-Windsor Tunnel in 1930 led to the demise of a majority of the ferry company's business. With fewer routes and plenty of newer, larger steamers to run them, the Promise was taken out of service.

The Promise was abandoned in 1934 and scrapped in Detroit a year later.

Ferry service from Woodward Avenue ended July 18, 1938. The ferry company itself folded in 1942. 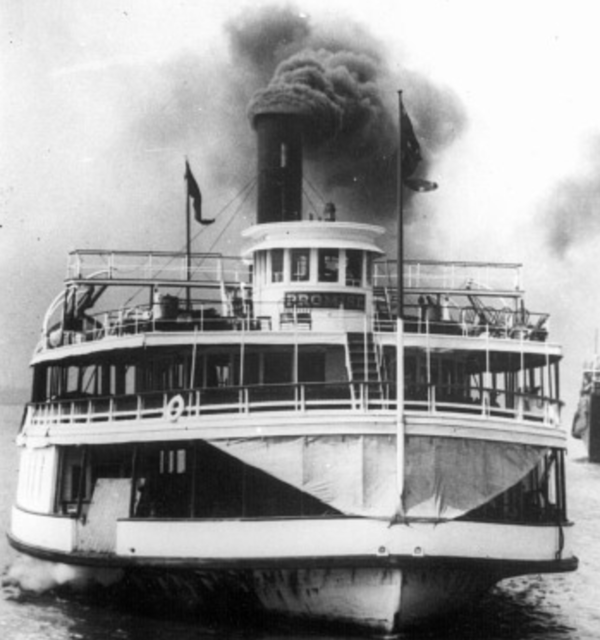