The steamer Pleasure was part of the fleet of the Detroit, Belle Isle & Windsor Ferry Co., which took shuttled passengers between those locations.

The vessel was launched May 30, 1894, at West Bay City, Mich., at the Wheeler & Co. Shipyard. She would be designed in the drafting offices at Wheeler, but based on naval architectural master Frank E. Kirby's Promise of 1892.

She was the first ferry on the Detroit River capable of carrying 3,000 passengers at once across three decks. She was 140 feet long and 39.5 feet across.

The Pleasure entered service on June 15, 1894, making an excursion trip. Such excursion steamers were very popular during the summer, making day trips to places like Tashmoo Park and Boblo Island. Some of the more famous excursion steamers plying the Detroit waters included the Boblo boats Columbia and Ste. Claire and the Tashmoo.

The company boasted in news releases about the Pleasure's interior of polished birch and plate-glass windows.

She was added to the company's fleet to help carry passengers from downtown Detroit to Belle Isle. In an era without cars, a steamship was the fastest way to go. However, she would spend much of her career ferrying folks the half mile between Detroit and Windsor, Ontario. The ferry company boasted of 10-minute service across the Detroit River.

She was intended by the ferry company mostly as an excursion vessel, but certainly served the cross-river ferry carrying vehicles and was eventually converted to an auto ferry in 1928, her main deck cleared of all its cabins.

But between the rise of the automobile and construction of the Belle Isle bridges, then the Detroit-Windsor International Tunnel and Ambassador Bridge, the ferry company soon found itself bleeding customers.

The ferry company retired Pleasure from service in 1929, only a year after its conversion to a car ferry. At some point in the 1930s, she was sold to Nicholson Terminal & Dock Co. and spent some time in its slip before being dismantled there in 1940. Her life was not especially short for a wooden-hulled vessel, although the bridge and tunnel certainly didn't help matters.

The ferry company itself folded in 1942. 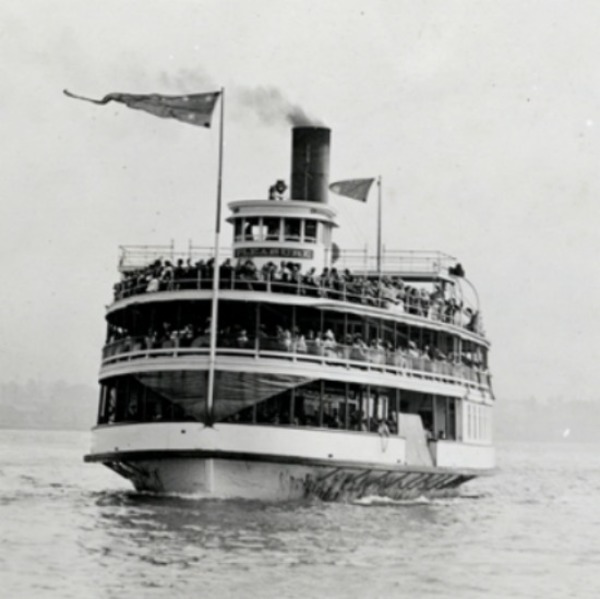