Gabriel Chiera came to Detroit from Chicago following the Fire of 1873 and set up a candy shop across from a park just north of Campus Martius.

Within a few years, Chiera opened up the Parisian Laundry, which was in business for several decades and was the largest in the city. It made him a fortune, and he opened several laundries in other cities. The businesses made him one of the city's most successful Italian-American businessmen.

Around the turn of the century, Chiera decided to try his hand at the resort-hotel business. He built and managed the 100-room Oriental Hotel, across the street from the old main branch of the Detroit Public Library. Its original address was 60 Farrar, but the street was later renamed Library Street because, well, that's where the library was.

The hotel was operated on the European plan and featured Turkish, Russian and electric baths, which the hotel's ads called "marvels of luxury." Clients "will find the Oriental the most luxurious, most absolute in cleanliness," an ad boasted. A room would set you back $1-$2 a day but included a shower and plunge bath. Bath robes were "furnished free." The hotel also had a grill and cafe.

The hotel was for only the gentlemen, though it did have a ladies' bath that was open daily except for Sundays. The ads said the Oriental was "open day and night."

On Oct. 22, 1901, Chiera announced he was retiring, planning to take a well-deserved break and visit family in his native Italy.

Business partners Austin E. Morey and Fred Postal, who ran the Griswold Hotel on Capitol Park, took over. Postal was notable as he was president of the Michigan State Fair Association and was the man who first brought major league baseball to Washington, D.C. He was a co-owner of the team from 1901-1903.

Herbert Baker of New York City died Aug. 23, 1900, after overdosing on morphine, but other than that, the hotel's life was rather uneventful - and it stayed out of the papers.

In July 1912, the Oriental was bought by George Fulwell, who also ran the Hotel Normandie downtown.

By 1928, the hotel was listed in directories as the Spa Stag Hotel. Then it just sort of disappeared around the 1950s, largely forgotten to history. 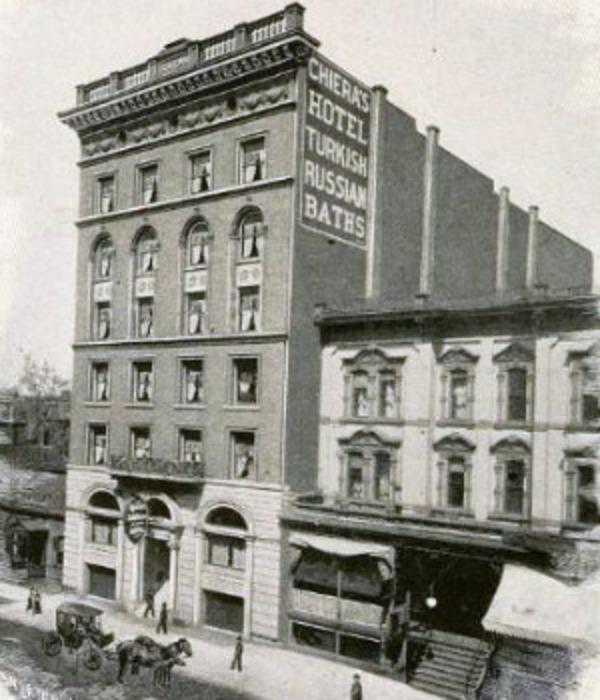