By ERIC BECKER for HistoricDetroit.org

This incredible residence at the corner of Ledyard and 2nd Avenue was the home of Ernst Nuppenau. The house overlooked Cass Park and was on the northern outskirts of the city at the time it was built in the late 1870s. While average in size for its time, the house is a lost and exemplary monument to what is known as the Stick Style that fueled a large part of Victorian home design.

Nuppenau was a carpenter known for sashes, doors and blinds whose firm – Byram, Nuppenau & Clark, and later Nuppenau & Clark – was responsible for many early Detroit homes and modifications. Nuppenau’s home exemplifies his incredible skill in carpentry and taste for architectural flair.

Nuppenau was born in Prussia around 1828. He was married to Wilhelmina Nuppenau, also born in Prussia. They had three children, Mathilda, Wilhelmina (or Minnie) and August. Apart from his business endeavors, Nuppenau was also supervisor of school buildings for a time and active in Detroit circles as men of his stature often were. It was once said that “he is not an easy person to work for. He won’t allow any loafing or bumming, but believes in men earning their money. He is a practical man of good sound sense,” the Detroit Free Press wrote in 1891.

This much cannot be said for his wife, however. The couple’s eldest daughter, Mathilda, disobeyed her mother’s wishes and married a man at age 16 whom she did not approve of. As a result, her mother disowned her from the family. Her father, in a possible attempt to play mediator between the two, reportedly provided his daughter a home and a living allowance so long as her mother never found out. When Ernst Nuppenau died around 1894, his widow grossly underrepresented the share of the estate left to Mathilda in the will, thus leading to Mathilda suing her mother. The case was later settled. From census records, it appears Mrs. Nuppenau played favorites. Her other daughter, Minnie, and her son, August — both accomplished zither artists, the latter a stenographer — lived with their mother, along with various lodgers, until her death in the 1910s. Minnie and August were unmarried.

The house itself survived until the 1940s as a rooming house when the entire block of Ledyard was torn down, including the Romanesque castle once belonging to Edward Voigt at Ledyard and Second. Where the Nuppenau house once stood now stands an apartment building and the Michigan Chronicle Building. 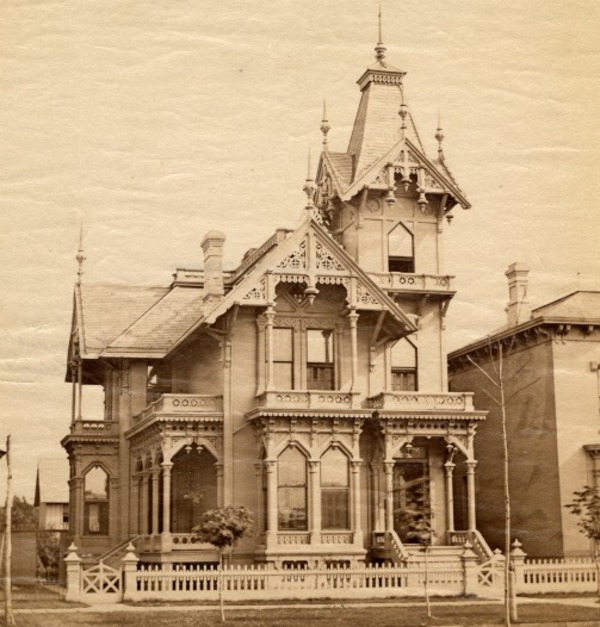