The North West began its life as one of the finest passenger steamers ever built for service on the Great Lakes -- and, after a series of unusual events, ended that life by being torpedoed by the Germans during World War II.

The twin-screw North West was launched in 1894 in Cleveland by the Globe Iron Works Co. for the Northern Steamship Co. She was furnished and decked out in Buffalo, the hometown of Northern Steamship. Her sister ship, the North Land, was launched in January 1895 and entered service later that year. The vessels ran between Buffalo and Duluth with stops in Detroit, as well as Cleveland and the Michigan ports of Sault Ste. Marie and Mackinac Island.

The pair was built by Minnesota railroad tycoon James J. Hill of the Great Northern Railroad, who had established Northern Steamship Co. in order to connect his freight shipments between Duluth, Minn., and Buffalo. After realizing success on the Great Lakes, he decided to try his hand in the passenger ship market. To do that, he set out to make steamers every bit as luxurious and beautiful as the ocean liners of the day.

The North West's interiors would be decked out in mahogany and brass in the Louis XV Rococo style. Bronze and marble statues rubbed elbows with passengers on their way to the lavishly appointed staterooms, reading rooms, parlors, cafes, smoking rooms and a dining room fashioned after a prince's banquet hall. She also was loaded with all sorts of amenities for the time, including flush toilets and hot water with constant water pressure.

Besides Detroit, the passenger liners called at the ports of Chicago, Cleveland, Buffalo, N.Y., and Duluth, Minn. They cost $650,000 each (about $19.5 million today, when adjusted for inflation). Unlike many vessels of the era, the North West and North Land were exclusively passenger ships; they had a passenger capacity of 350 first-class and 300 second class, as well as 185 crew.

The 383-foot North West was powered by a pair of vertical, quadruple-expansion steam engines that pumped out 7,000 horsepower -- good enough to catapult her through the water at a regular clip of 20 miles per hour. That speed came at a price, however: Her 28 boilers ate up a total of 8 tons of coal every hour.

The steel-hulled ship also originally had three smokestacks, but that was reduced to two during a major makeover in 1902 that also saw her deck altered.

On June 3, 1911, the North West was ravaged by a fire that led to the end of her passenger service career.

This is when things get really interesting.

She was finally sold in 1918 to J.F. Darcy of Montreal, who had her cut in half in order to be taken through the Welland and St. Lawrence canals (she wouldn't have been able to fit, otherwise). The plan was to then patch her back together and enlist her in ocean service. That, however, never happened because, while being towed, her forward half foundered and sank in Lake Ontario on Nov. 29, 1918, killing two crew members.

The surviving half was then bought by Davie Shipbuilding & Repair Co. Ltd of Lauzon, Quebec, and outfitted with a new bow and turned into a freighter. At this point, the vessel did not even closely resemble the passenger steamer that had plied the Great Lakes. She was renamed the Maplecourt and returned to service in 1922 with Canada Steamship Lines Ltd. of Montreal.

In 1927 she was stranded on Magnetic Reef in the Georgian Bay and sold to Sin-Mac Lines Ltd, Montreal. Ten years later, she was bought by the United Towing & Salvage Co. Ltd. of Port Arthur, Ontario, to be converted to ocean service. Getting her out of the Great Lakes and out on the Atlantic required her to be cut in half and stitched back together, again, in 1940.

On Feb. 6, 1941, she was headed from Montreal to the United Kingdom when she was spotted by a German U-boat, which tailed her for hours until firing a torpedo that struck near her engine room.

The Maplecourt was doomed, sinking in the North Atlantic Ocean, south of Iceland, killing all 38 men aboard. 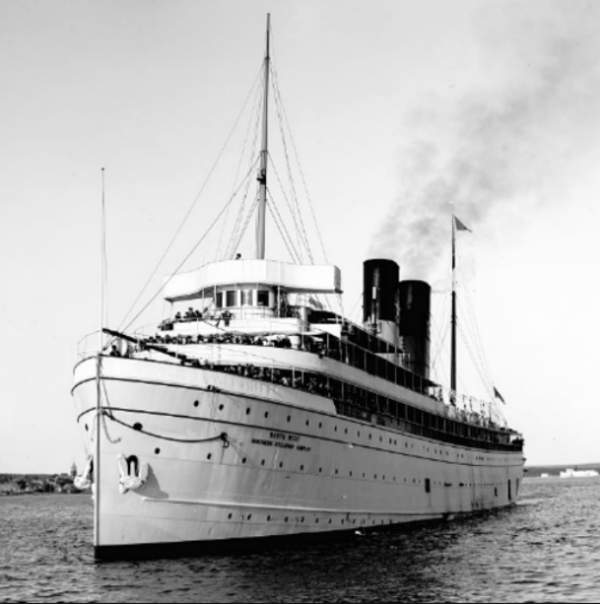