The Noronic was one of many stately passenger vessels cruising the Great Lakes, but it will forever be remembered for one of the deadliest tragedies on the inland seas.

The Noronic was launched June 2, 1913, at the Western Dry Dock & Shipbuilding Co. in Port Arthur, Ontario, on Thunder Bay. She was built for the Northern Navigation Co., a division of the Canada Steamship Lines, which was formed that same year following the merger of several shipping companies.

Over the years, CSL would grow to include more than 100 passenger vessels on the Great Lakes; it was known as "the Great White Fleet."

The Noronic had room for 600 passengers and 200 crew members, and like other Great Lakes passenger liners, was outfitted with ornate plaster and woodwork in her common areas. She had five decks and was 362 feet long. Propelled by a triple-expansion steam engine, the Noronic could cruise along at 16 knots (about 18 miles per hour) while couples swayed away to the sounds of the Noronic's orchestra on the vessel's dance floor, caught up on sleep in their staterooms or grabbed a bite in its dining room. The vessel carried not only passengers, but also handled package freight service. She spent most of her days operating between Detroit and Cleveland and ports on the upper Great Lakes.

She was steel-hulled and featured watertight compartments and a double bottom, for safety, which was top of mind just two years after the Titanic disaster.

Her maiden voyage was May 30, 1914. She arrived in Detroit late that afternoon, with the Free Press noting that she "swung regally about" as she entered the Detroit River. "A throng of admiring Detroiters gathered to do her honor at the Grand Trunk docks." The steamer departed at 7:30 p.m. for her first trip, a cruise on Lake Erie with about 50 guests from Detroit and Windsor aboard. When she arrived back in Detroit the following day, she docked at Brush Street and was made available for public tours. She headed to Cleveland that night.

"The interior of the big ship comprises the utmost in decoration, convenience and comfort in shipbuilding," the Detroit Free Press wrote the morning after her maiden trip. "Color effects in decoration harmonize throughout and are set off to splendid advantage by the lighting system of sunken or diffused lights, restful to the eye, while they are powerful enough to keep the beautiful decks lighted with the brightness of day. ...

"Everywhere on the big steamer is a sense borne to the visitor that the motive behind all the splendid finish and workmanship is convenience and comfort for the passenger. The staterooms, all roomy and spacious, are equipped with individual radiators, with reading lights for each berth and every other convenience of home or the metropolitan hotel. ... Nothing has been overlooked to make water travel on the Noronic enjoyable."

The end for the Noronic came in the early morning hours of Sept. 17, 1949. She had left Detroit on a seven-day pleasure cruise three days earlier, on Sept. 14, and was nearly at capacity, with 524 people aboard. While docked at Pier 9 at the foot of Bay Street in Toronto, a passenger noticed smoke seeping from a locked closet at about 2:30 a.m. When a crew member unlocked the closet, causing a backdraft. The fire exploded, and grew quickly as it fed off the heavily lacquered wood and turned the steamer into an inferno of 50-foot flames that burned for more than two-and-a-half hours. As the Noronic's distress whistle filled the air, passengers scrambled down ropes and the gangway to the safety of the dock below. Others lept into the harbor, some being pulled onto rafts by Good Samaritans who rushed to help.

The first fire truck arrived just 11 minutes after the fire was discovered, but by this time, the ship was already engulfed. The fire was finally extinguished around 5 a.m.

In all, 119 people lost their lives (some reports say 118). All but one was American. Many of the passengers were trapped in their rooms. Some jumped from the burning upper decks onto the dock below and were killed by the fall. Others were trampled. Victims were so badly burned, dental records had to be used to identify many of them; it is said to be one of the first times this technique was used.

The Noronic's hull was salvaged and sold for scrap. It was dismantled in Hamilton, Ontario.

Coincidentally, just four years earlier, the Noronic's sister the Hamonic also was destroyed by fire in Ontario. Unlike on the Noronic, however, all 400 passengers managed to escape.

Lawsuits followed, as did new international regulations pertaining to ships containing wooden superstructures -- like those of the CSL fleet.

On Jan. 23, 1952, CSL announced that it was ending its passenger services on the Great Lakes. 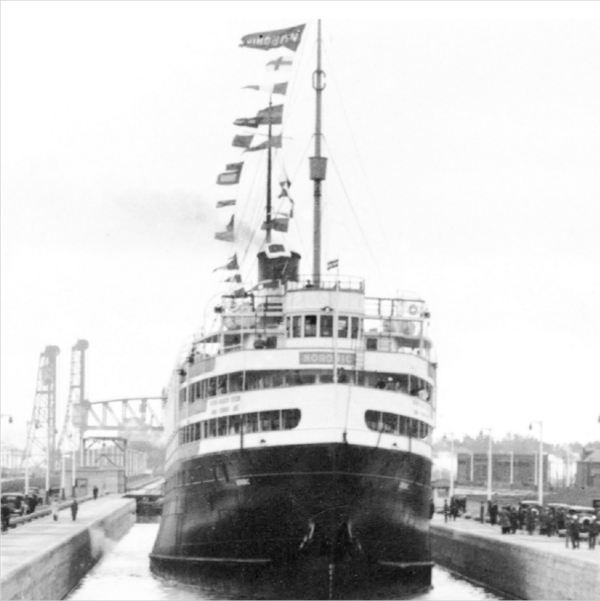