Publisher James E. Scripps sought to pay tribute to the thousands of young boys who hawked his newspapers with a statue on Belle Isle.

Scripps had founded the Detroit Evening News, forerunner of the Detroit News, in 1873. He served as its publisher until his death in 1906.

The Newsboys Fountain was revealed at a picnic held on the island on July 6, 1897. The Detroit News reported that some 5,000 newsboys attended the party, and Mayor William Cotter Maybury delivered remarks.

The sculpture was done by artist Frederick Dunbar, who depicted a newsboy counting his change next to his faithful dog. The cost of the piece was $3,500 (about $105,000 today, when adjusted for inflation). The statue stood above a water fountain.

The newsboy was abducted in 1966 but was later recovered and reinstalled on the fountain. Sadly, some thief absconded with him again in 1974, leaving only the newsboy's poor canine companion behind for almost 25 years.

With the 100th anniversary of the fountain's dedication approaching, Grosse Pointe Park-based scultpor Janice Trimpe was approached about re-creating the missing statue. Using old photos, she came up with a faithful replica of the young man. It was dedicated exactly a century after the first: on July 6, 1997. Trimpe named the piece, "Partners: A Newsboy and His Dog." The fountain is no longer operational.

More on this monument coming soon. 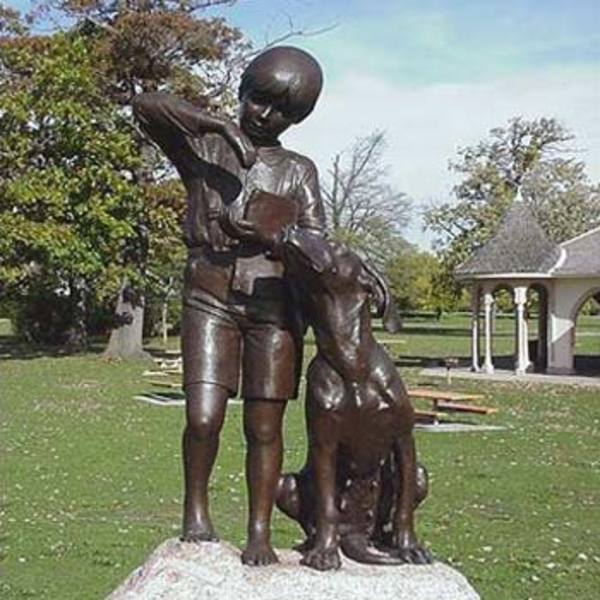