The McGregor Memorial Conference Center -- the first of four buildings on the Wayne State University campus designed by world-renowned architect Minoru Yamasaki -- opened on May 18, 1958. The facility represented the product of a $1,279,000 gift from the McGregor Fund and was named for the organization’s founders, Tracy W. and Katherine McGregor. Arrestingly modern in comparison to the surrounding campus buildings, the McGregor Memorial Conference Center signaled a new era of innovation for both Yamasaki and the academic institution that commissioned him.

“As graceful and sun-filled as a dream palace…”

So declared an August 1958 Architectural Record feature celebrating the completion of the McGregor Memorial Conference Center. With its striking atrium, sculpture garden, and dramatic columns, many still consider McGregor Memorial Conference Center one of Yamasaki’s most distinguished works. A basic tripartite massing enlivened by a profusion of rich ornament and detail, the McGregor Center consists of two travertine and marble-clad pavilions linked by a slightly projecting, two-story atrium capped with dozens of pyramidal skylights. The building occupies a platform of marble panels raised several feet above ground level. The end of each pavilion features full-length windows recessed behind slender columns supporting concrete accordion ceilings. Anodized aluminum sunscreens with complex geometric designs adorn the building’s windows and doors. The pavilion’s deep overhangs and pattern of linked inverted triangles contrast to the glass facets capping the atrium. In describing the building, Yamasaki claimed that he tried “to create a beautiful silhouette against the sky, a richness of texture and form, and a sense of peace and serenity.”

The architect’s desire for visual dynamism extended into the McGregor Memorial Conference Center’s interiors, which were designed to inspire and engage visitors. Though the interior finishes consist only of marble, white-painted plaster, and teak panels, Yamasaki employed a triangular motif throughout the interior that echoes the building’s exterior forms. The shape appears in elements ranging from the aluminum screens over the entrance doors to the railings on the atrium balconies. These details succeeded in unifying the many elements of the design into a visually cohesive whole.

By far most important to the McGregor Center’s design, however, is the atrium. Yamasaki viewed this space as key to the success of the complex and described his objective of “a refreshing experience to have the central lobby so completely different from the conference rooms, both in architectural treatment and in ceiling height.” Indeed, the angles of the atrium’s skylights produce an ever-changing natural illumination, which reflected off of the space’s bright marble surfaces. When the building opened, the atrium also featured a bright red carpet; a vibrant contrast to the building’s otherwise muted palette. Yamasaki furnished the atrium with rows of Mies Van der Rohe’s Barcelona Chairs and sleek, glass-topped tables.

Yamasaki understood well that in order for the McGregor Center to achieve the desired function of the “gateway to the University,” the building’s immediate surroundings must also entice and excite visitors. To this end, he designed a court of triangular pavers in front of the building. The architect felt that the unusual surface (which has since been removed) was “more fun than a regular sidewalk.” For the area behind the center, Yamasaki planned a large, L-shaped sunken garden and reflecting pool. Within the pool, the architect arranged several tall stones and rectangular islands. Soon after the building’s completion, the islands became home to two sculptures - The Nymph and The Faun - by Italian artist Giacomo Manzu. As period images of the reflecting pool show, the space functioned as a tranquil space for relaxation while also providing beautiful views for those within the conference center.

When placed in the context of the architect’s career, the McGregor Memorial Conference Center signifies an important shift in Yamasaki’s perspective on modern design. In the decade leading up to the McGregor commission, Yamasaki adhered to the strict modernist tenets as prescribed by Mies Van der Rohe, Corbusier, and others. His 1951 design for the annex to the Detroit branch of the Federal Reserve Bank of Chicago on West Fort Street and 1954 addition to the University Liggitt School in Grosse Pointe Woods exemplifies this approach. Following a several month long journey through Asia and Europe in 1955, Yamasaki experienced a personal revelation through which he realized that beauty, elegance, and human welfare trumped strict adherence to formal principles. In the buildings that he designed following this realization, one of the first of which was the McGregor Memorial Conference Center, Yamasaki sought to “create a structure that is in harmony with both man and its environment.” The focus on integrating function with what the architect would later term as “delight, serenity, and surprise” continued to inform Yamasaki’s work, both in his later buildings on the Wayne State campus and elsewhere. This humanistic approach, which was also championed by New York area architects Edward Durrell Stone and Phillip Johnson, would later become known as New Formalism or Neo-Palladianism.

“A crisp little temple of talk…”

In the decade following its completion, the McGregor Memorial Conference Center earned several significant accolades, including the First Honor Award from the American Institute of Architects. A Time magazine article published on Yamasaki in 1958 titled the conference center “a crisp little temple of talk” and an “architectural gem.” Detroit Free Press writer Lillian Braun described the building in similarly flattering terms, saying “a building that looks like a white flower floating in a lily pool has blossomed on the Wayne State Campus.”

In addition to gaining wide critical acclaim, the McGregor Center also became the anchor of a monumental project to restructure and expand the Wayne State campus. With the backing of the University administration and the city of Detroit, Yamasaki produced a campus master plan that doubled the size of the institution in fifteen years and transformed a half-mile section of Second Avenue into a tree-lined pedestrian mall that the architect dubbed “an island of urban delight.” Yamasaki designed three additional academic buildings during this process: the College of Education (1960), the Prentis School of Business Administration (1964), and the Helen D. Roy Auditorium (1965). In 1960, only two years after the McGregor Memorial Conference Center opened, its resources were greatly expanded with the adjacent addition of the Community Arts Auditorium. This facility, designed by local architect Suren Pilafian, contained a 600-seat theater and 5,000 square foot exhibition hall. The Community Arts Auditorium adjoins McGregor Center by way of a glazed hyphen.

As the campus surrounding it changed dramatically in the 1960s and 1970s, the McGregor Memorial Conference Center continued to function much as Yamasaki had intended. The spaces within accommodated a wide range of events, including student symposia, faculty parties, and fundraising events. The McGregor Center was not, however, intended solely for university patrons. From the earliest planning stages, the donors made clear that the building was to serve the needs of local residents as well as the collegiate community. In this way, the center represented an architectural link between town and gown and an illustration of Wayne State’s commitment to supporting its neighbors. Initially, access to the center’s facilities was limited to local civic and educational organizations, who could apply to hold events in the building the through the University’s Activities Committee. By the 1990s, the Committee was also renting space within the center to corporate groups.

“A touchstone of greatness …”

The McGregor Memorial Conference Center has experienced few alterations since its construction, a testament to its enduring usefulness and beauty. In 2013, the Detroit Free Press called the building “a touchstone of greatness…modest in size but beautifully detailed and perfectly proportioned.” Nonetheless, the center faced several challenges in the years following its completion. Chief among these was a lack of funding to maintain its unusual architecture. A 1966 Detroit News article, for example, described the high cost of replacing large windows which had cracked due to the temperature variations between the portion of the glass shaded by the deep overhangs and that which was exposed to direct sunlight.

In his autobiographical A Life in Architecture, Yamasaki recounts how, only a decade after its completion, the McGregor Center’s reflecting pool had also fallen into disrepair. The architect, who by that time was well connected in local circles through several of his major commissions, convinced a friend and chairman of the McGregor Fund to arrange a maintenance endowment for the building’s exterior features. The reflecting pool continued to pose maintenance problems, and by the late 1980s sat empty. In 2011, the University began a $1,200,000 project to restore the pool, which reopened in the spring of 2013.

The restoration of the reflecting pool, which was featured in several national news sources, signaled the renewed interest mid-century architecture and, more specifically, the works of Minoru Yamasaki. The McGregor Memorial Conference Center was added to the National Register of Historic Places in 2011. Four years later, it was elevated to a National Historic Landmark, one of only 43 in the entire state of Michigan, as of 2022. 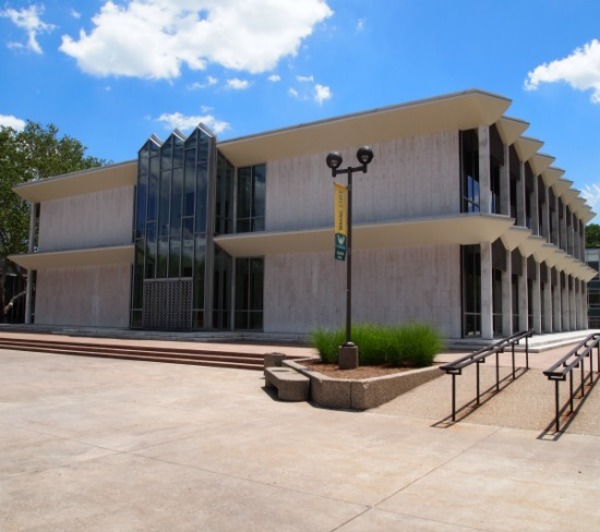