On the eastern side of Boblo Island is a monument that still stands as a tribute to sailors and maritime interests on the Great Lakes, long after the amusement park has closed.

It was unveiled in the late fall of 1909 and erected by the employees of the Detroit, Belle Isle & Windsor Ferry Co. (DBIC).

It is a 14-foot-tall concrete pedestal measuring 18 feet by 24 feet at the base and weighing 125 tons. A large chain surmounts the large block and leads to a full-size anchor that is 10 feet from fluke to fluke and 16 feet tall. It weighs about 3,000 pounds. The anchor was recovered from the four-masted, accident-prone steam barge City of Cleveland. The Cleveland was part of the Bradley Transportation Co. of Cleveland, which was launched in 1882 and had a tendency to ground herself -- apparently one too many times.

After the barge was wrecked for the last time -- on Sept. 17, 1901, at Cove Island in the Georgian Bay in Lake Huron -- the anchor came into the possession of Capt. H.W. Baker, "Detroit's noted wrecking master," the Detroit Free Press wrote in its Nov. 19, 1909, edition. The DBIC acquired it from Baker for the "tribute to the lake sailor and the inland marine," the Free Press added.

The monument was designed in the offices of the DBIC and built by its employees, who used 25 tons of cement and 250 loads of sand and gravel to create it.

A plaque on the monument reads:

“Dedicated to 134 years of American-Canadian friendship across 4,500 miles of unfortified border, protected only by the mutual respect and understanding one nation holds for the other.

"Presented in the name of the border cities of Detroit, Windsor, and Amherstburg. 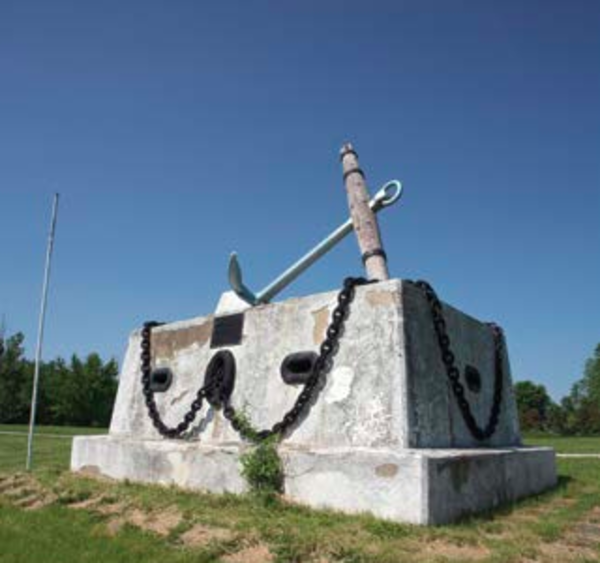