The Bagley Bust is a piece of public art that is arguably more notable for the mystery that surrounded it for nearly a century than the man it honors.

John Judson Bagley was born July 24, 1832, in New York and came to Detroit in 1846 to pursue a career as a tobacconist, establishing the John J. Bagley & Co. He would go on to be elected to the Detroit school board and, later, the city's Common Council. In 1872, he was elected the state's 16th governor and would serve two two-year terms. His greatest accomplishments as governor included establishing the state Board of Health and overseeing construction of the State Capitol. He was also a founding member of the Republican Party.

When he fell ill, the Free Press extolled on July 14, 1881, that "the loss of a man like Governor Bagley would be a public calamity; and the prayers of his immediate friends for his restoration to health will find a responsive echo in thousands of hearts."

He died less than two weeks later, on July 27, 1881, at the Occidental Hotel in San Francisco. He was 49 years old. In his will, he left funds to erect the Bagley Memorial Fountain, which would produced "water cold and pure as the coldest mountain stream" for his fellow Detroiters.

In a sermon written upon Bagley's death, the Rev. T.B. Forbush spoke that Bagley’s administration was characterized by four principle tenets: 1) that the state should contract no debts or incur any expenses that it could not promptly meet, 2) that those who were less fortunate, above all children, should have no less opportunity than those who are fortunate, 3) that education should be practical and widespread and necessary for industry, and 4) that he never quivered in his confidence in the people of Michigan. Bagley was quoted by the Free Press as saying that having “faith that with good laws, equal justice, and general education as the foundations, we could build here a State that would stand forever as the handiwork of a free people.”

His funeral plunged the city into a great state of mourning.

"One of the most touching sights ever witnessed in connection with a funeral service was the procession of 100 orphan girls that followed the remains of the late ex-Governor Bagley to the City Hall yesterday," the Detroit Free Press reported on Aug. 7, 1881. "Many a time in the past have they been the recipients of the late governor's bounty, for when children, and especially needy children, were concerned, he gave without asking about sect or denomination. Their gathering ... was a tribute of loving and affectionate remembrance such as very few of our public men have ever received or been entitled to."

Perhaps it is no surprise that a group of citizens set out to honor him, raising money to hire sculptor Carl Herman Wehner to produce a bust of the governor. Wehner also sculpted busts of other Detroit luminaries, such as Sen. James H. McMillan and S.S. Marquis, the former dean of St. Paul's Cathedral. In February 1889, the bust was finished and sent to the foundry.

That May, the Detroit Common Council approved accepting the bust and placing it in Campus Martius, though some preferred Grand Circus Park, near his former home at Bagley and Park avenues. The location, though prominent, remained controversial for several decades, with calls to move the bust beginning in the 1890s.

In July 1902, a low iron fence was placed around the monument because "belated and bibulous individuals" often sat on its base, the Free Press reported Aug. 2, 1902.

In 1926, Woodward Avenue was to be widened, so the Bagley Bust and the Merrill Fountain were evicted. The fountain was exiled to Palmer Park; the bust was given to the Detroit Museum of Art for safekeeping until a new home could be found. In 1931, the Free Press noted that, because of a lack of space, the bearded bust was stored in the vaults, despite being promised that it would "occupy a place of honor."

In 1935, proposals were floated to move it to Grand Circus Park, near the site of his former home. But it never happened, and the Bagley Bust was simply forgotten about, with few, if any, mentions appearing in the local papers for more than 80 years.

Because the bust remained property of the City of Detroit's Department of Parks and Boulevards, it was never added to the Detroit Institute of Arts' collections, helping to keep its location a mystery. For the next 84 years, it would be "lost."

In July 2019, HistoricDetroit.org revived a previous search for the Bagley bust and, with the help of Barbara Heller of the DIA, was able to find the bust gathering dust in a DIA warehouse. The tale of the Bagley monument and the quest to track it down was told in the Detroit Free Press that October, and a search for a new home for it began. 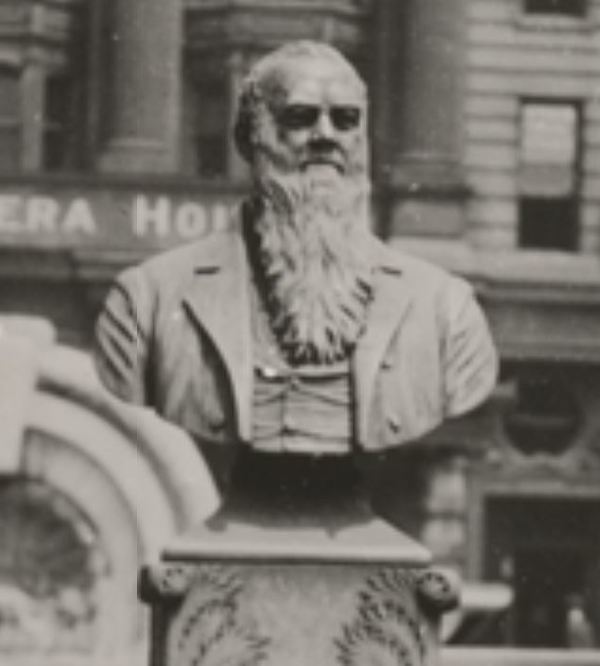