The Scott Memorial Fountain is the jewel of Belle Isle - and a monument to a womanizing scoundrel.

Socialite James Scott was said to have been lazy, eccentric, a prankster and a real rapscallion. He had inherited his money from his father -- a successful real estate tycoon -- and spent his days not working like the rest of his fellow Detroiters, but often gambling it away and being an all around man about town. He also made shrewd real estate investments that only added to his fortune. But he was a perpetual bachelor and frequently entertained women of "less moral fiber." In his "The Buildings of Detroit: A History," William Hawkins Ferry writes that Scott "had the reputation for being a vindictive, scurrilous misanthrope. ... His enemies were legion, for he seemed to delight in feuds, lawsuits and practical jokes."

When he died in 1910, his vast estate was left to the city to build a monument for the people. Of course, his gift came with a catch: The city also had to erect a life-size statue of himself. The issue would be locked in bitter debate for years.

"Only a good man who has wrought things for humanity should be honored in this way," Bishop Charles D. Williams said of the plans to erect a fountain in Scott's honor.

J. L. Hudson, the department store magnate who started one of metro Detroit's best known and most respected retail chains, also slammed the notion of a monument to Scott, saying, "Mr. Scott never did anything for Detroit in his lifetime and he never had a thought that was good for the city."

But money won out, and it was decided to build the fountain on the southern tip of Belle Isle. "I don't believe the city has a right to insult any of her citizens by refusing a gift for such a good cause," then-Mayor Philip Breitmeyer said. A nationwide competition was held for the design of the fountain, and Cass Gilbert was the winning architect. Gilbert also designed the Detroit Public Library and the U.S. Supreme Court Building in Washington. The bronze statue of Scott was modeled by sculptor Herbert Adams of New York. The Vermont white marble fountain was unveiled May 31, 1925 - 15 years after Scott's death -- and cost $500,000 to build (about $6.2 million today).

The back of the chair holding Scott's statue says: "For the enjoyment of the people and for the adornment of his native city. James Scott bequeathed to Detroit his fortune to be used in the construction of this fountain. Erected MCMXXIII. From the good deed of one comes benefit to many."

The fountain is 510 feet across, and its central fountain could spray water 125 feet into the air. It has 109 water outlets in the shape of dolphins, turtles, lions and human figures.

After undergoing a major restoration about 2005, thieves stole copper components of the fountain, rendering it inoperable. Following a major overhaul, the fountain returned in 2014 to daily service during the summer, complete with a light show at dusk.

More on this landmark of Detroit coming soon. 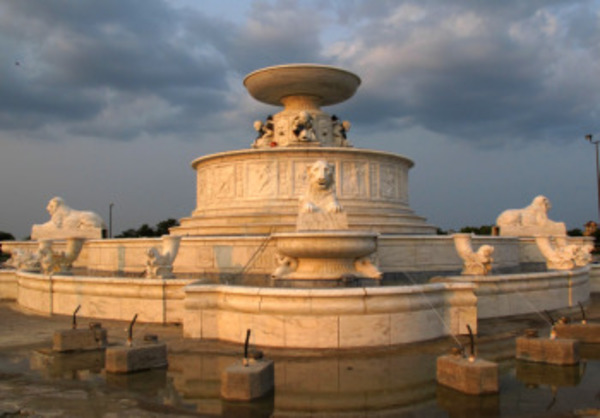