The James Battle was a fire boat that served as the longtime guardian of Detroit's waterfront and participated in one of its most famous fires.

The Battle was built in Wyandotte, Mich., by the Detroit Shipbuilding Co. and designed by the renowned naval architect Frank E. Kirby, the man behind a number of Detroit's most beloved vessels. She was launched Oct. 13, 1900, and entered service the following January.

The Detroit Fire Commission ordered the steel-hulled fire tug late in 1899. She was named after Fire Chief James Battle, who served for more than 45 years, nearly 35 of them as chief, until retiring Feb. 9, 1895, because of illness. He died one month later, on March 24, 1895, at age 64. His last charge was the fire that destroyed the old high school (which was also Michigan's first State Capitol) on Jan. 27, 1893.

Upon Battle's death, at a meeting of ex-Detroit firefighters, the following resolution was adopted: "James Battle won for himself a reputation for fidelity to trust and efficiency in the public service. ... A strict disciplinarian, there is no man of the thousands who have served under him ... who, now that he is gone, may say that James Battle did him conscious wrong. His entire career was one of daring devotion to duty and of intelligent development of the system entrusted to his care."

On April 15, 1915, the James Battle responded to a fire at the old Belle Isle Bridge, but she was unable to save the old span.

In 1940, Mayor Edward J. Jeffries ordered the aging Battle to be retired from service, and she was decommissioned March 13, 1940.

On April 22, 1941, it was announced that the City had sold the Battle to the Sincennes-McNaughton Tugs Ltd. of Montreal for $22,500. She would be rebuilt several times, finally as a diesel tug operating in the Port of Montreal and in the St. Lawrence Seaway. She was finally retired in 1991 and sold for scrap, ending a 90-year career fighting fire on the water. 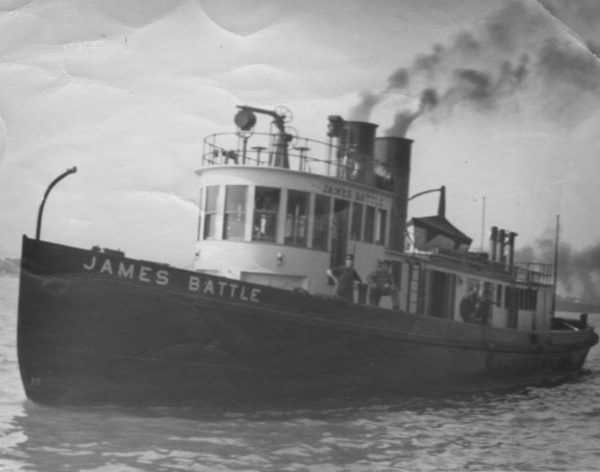