The J.T. Wing was the last wooden commercial sailing ship on the Great Lakes, and also served as the Museum of Great Lakes History, the fore-runner of the Dossin Great Lakes Museum.

The Wing was originally named the Charles F. Gordon, and was launched in Weymouth, Nova Scotia, in 1919. The schooner was 147 feet long and 34.66 feet wide.

She had a colorful history, having been a rum-running vessel during Prohibition and also transported mahogany from East Africa to the United States. In 1923, she was renamed the J.O. Webster.

In 1935, she was grounded on Norwalk Island, Conn., and was then sold to Harry F. Morse, who planned to use her to move pulpwood around the Great Lakes. That plan either never took off or didn't last long, because that same year the schooner was sold to Detroit sailing buffs, J.T. Wing Jr., president of J.T. Wing & Co., and company manager Grant H. Piggott.

They planned to use her as a training vessel for the Sea Scouts of Detroit and renamed her the J.T. Wing. She made her first voyage with her Sea Scout crew on June 18, 1940, and would take 2,000 more of them over several trips over 1940 and 1941. But the onset of World War II ended her voyages, and she was laid up until being sold to the Chippewa Lumber Co. in 1941, presumably to be returned to service. She was renamed the Oliver H. Perry, in honor of the Naval hero of the War of 1812.

In 1945, she was donated to the Detroit Historical Commission to be turned into a maritime museum on Belle Isle, and renamed the J.T. Wing again.

On July 24, 1948, the schooner was taken to Belle Isle, as part of Detroit's 247th birthday celebration. You can watch video footage of the celebration here.

But by 1956, the Wing was falling apart and condemned as unsafe, and it was decided a more permanent home for the museum was needed. In order to get rid of her, she was burned Nov. 4, 1956, in front of a crowd of 6,000. the fastest way to get rid of an old wooden vessel in those days. But it would take more than a match to end the career of such a storied vessel.

"They then threw in about 100 old tires to make the fire hot enough to burn the waterlogged 12-inch square beams," the Detroit News recalled in 1998. "Then they soaked the hulk with 2,000 gallons of fuel oil. Firemen stood by with their hoses ready as police marksmen Insp. Harry Reeves and Patrolman Louis Begin fired bullets into the Wing until she boiled into a mass of flame, sending heavy clouds of black smoke into the leaden sky."

On July 24, 1960, the Dossin Great Lakes Museum opened on the site and has honored the city's maritime history ever since. It was designed by architect William E. Capp and built largely with funds donated by the Dossin family. 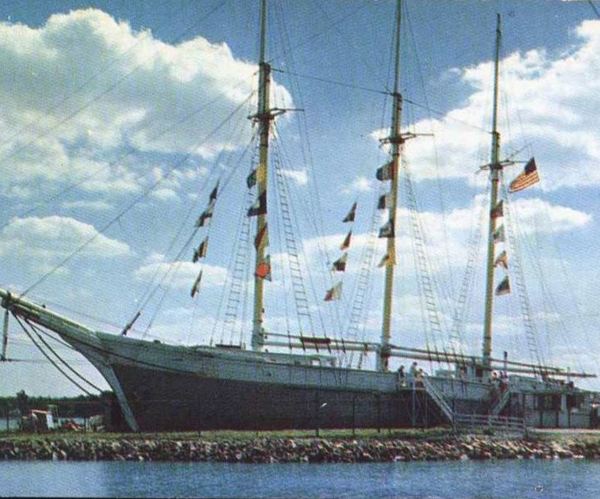