By Eric Becker for HistoricDetroit.org

Perhaps few others are as synonymous with Detroit as John Judson Bagley, whose mansion at the corner of Washington Boulevard and Park Avenue towered above Grand Circus Park for nearly 4 decades.

John Judson Bagley was born July 24, 1832 in Medina, New York to a pioneering family. During his young life he spent his years in Lockport, NY, then Constantine, MI, and Owosso, MI before arriving in Detroit in 1847 at age 14. In those days before the automobile came to Detroit, the city attracted a number of industries; principally among them were cartmaking, shipping, stovemaking, lumbering, and tobacco production. It was with the lattermost industry that John J. Bagley established himself, first as an apprentice, then a salesman, then an agent, and finally a manufacturer with his own tobacco house of John J. Bagley & Co. Having amassed a small fortune in tobacco, Bagley turned his interests to politics. In 1855 he was elected to the Detroit Board of Education and there he was among the founding members of what would become the Republican Party of the United States, where he would later serve as chairman for 4 years. His other work included positions as Detroit alderman and a member of the Detroit Common Council and the Detroit Board of Police Commissioners, and organizer and president of Michigan Mutual Life Insurance Company.

In 1868 John J. Bagley and his wife Francis E. Bagley née Newbury, set out to construct their impressive mansion on Park Avenue spanning the entire block between Macomb (now known appropriately as Bagley Street) and Washington Blvd, fronting on Washington. The mansion of incredible proportion was built in the Italianate Villa style, a style very popular in Detroit in the late 1860s and early 1870s. The house was of brick construction and featured an impressive 4 story tower where John J. Bagley could surely look out over the entire expanse of Grand Circus Park. In addition to the residence, an equally well-appointed carriage house was erected on Macomb. While nothing much is known of its interior, the Free Press in 1868, commenting on the house’s construction, said in the typical superlatives of those days, that Bagley’s mansion was “one of the largest and most elegant houses in that part of the city.” The Free Press continued saying the house featured “solid stone” and “hardwoods” and “will be finished in the most expensive and elegant manner.” It was said that in Bagley’s library he hung a motto that projected onto all that witnessed it a simple but charming phrase “East or west, home is best.” Surrounding himself with treasures of art and literature, and his wife and seven children -Florence, Sherman, John, Frances, Paul, Olive, and Helen- Bagley took immense joy in domestic life, welcoming many from all walks of life into his humble abode.

But Bagley’s greatest feat was his candidature and subsequent election by, according to the Free Press “an immense majority,” to Michigan governor in 1873, a position he would hold for two terms until 1877. As governor, Bagley accomplished much including the establishment of the Michigan Board of Health, the Michigan Fish Commission, and the State Pioneer Society. He took upon himself the task of controlling juvenile delinquency and was an adamant supporter of regulation of the railroads. Bagley was a member of the First Unitarian Church of Detroit and was thus a supporter of prohibition and helped usher in the liquor tax law. Bagley constructed new schools for the imprisoned, including the State School, and consistently took it upon himself to consider the welfare of what were then referred to as the “neglected classes.” In fact, it was Bagley’s administration during which the State Capitol Building was first introduced to the citizens of Michigan. In a sermon written for Bagley upon his death the Rev. T.B. Forbush spoke that Bagley’s administration was characterized by four principle tenants: 1) that the state should contract no debts or incur any expenses that it could not promptly meet, 2) that those who were less fortunate, above all children, should have no less opportunity than those who are fortunate, 3) that education should be practical and widespread and necessary for industry, and 4) that he never quivered in his confidence in the people of Michigan. Bagley was quoted by the Free Press as saying that having “faith that with good laws, equal justice, and general education as the foundations, we could build here a State that would stand forever as the handiwork of a free people.”

John J. Bagley passed away in San Francisco on July 27, 1881 and his remains were returned to Detroit and interred at Woodmere cemetery. At his funeral, located at his mansion off Grand Circus Park, the streets were said by the Free Press to be densely packed with people who had come to pay their respects, so much so that the crowd stretched for two or three miles down Fort Street and Woodward Avenue. In 1887 H.H. Richardson designed a lasting monument to John J. Bagley, when he constructed the Bagley Memorial Fountain in Cadillac Square.

There exists an old saying that behind every great man stands an even greater woman and nothing truer could be said of Frances E. Bagley, John J. Bagley’s wife and love of 26 years before his untimely death. Born Frances E. Newbury in Rutland, VT, Frances spent her youth surrounded by the religion of her Presbyterian minister of a father and the culture and travels of her mother. In 1855, Frances married John J. Bagley, who was for her a lifelong companion since childhood. During her life in Detroit and her years spent living in the lovely house and estate on Park, Frances founded a Sunday school and at her church, the First Unitarian Church, she taught a class in ancient religions, a class so popular it commonly outgrew the limits of the church parlors attracting on average 50 participants each session. Frances held the position of president of the Women’s Hospital and the Women’s Club and was an active member of the Industrial School. She maintained membership of the English Society for Hellenic Study and the Archaeological Institute of America, which met every session in her lovely home on Park. Frances, in sharing with her husband’s love of domestic life, would hold speeches for the entire public at their Park Avenue mansion including one evening where the Free Press recounts an enthralling speech by a monk on different Hindu philosophies which drew an immense crowd to the residence. If that weren’t enough Frances was a corresponding member of the Anthropological Society in Washington, D.C. and the Egyptian Exploration Society. Frances was even selected as one of the lady managers at large of the World’s Fair in Chicago of 1893 where she helped promote the opening of the fair on Sundays. After her husband’s death, Frances spent many years traveling, venturing as far as Greece and Egypt, which was no easy feat in those days. According to the Free Press, Frances Bagley was an accomplished student of literature, a liberal in her efforts, a social leader in her community, and a charming conversationalist. She passed away in 1898, 17 years after her husband.

The Bagley mansion served a stint for a while as the Michigan Conservatory of Music until 1907 when the massive edifice was sold to Arthur H. Fleming for $225,000 (approximately 5.5 million dollars today when adjusted for inflation). Flemming then sold the property to Ellsworth M. Statler who would go on to build the Statler Hotel on the site where Mr. John J. and Mrs. Frances E. Bagley celebrated a lifetime full of love and dedication to the people of Detroit and all of Michigan. 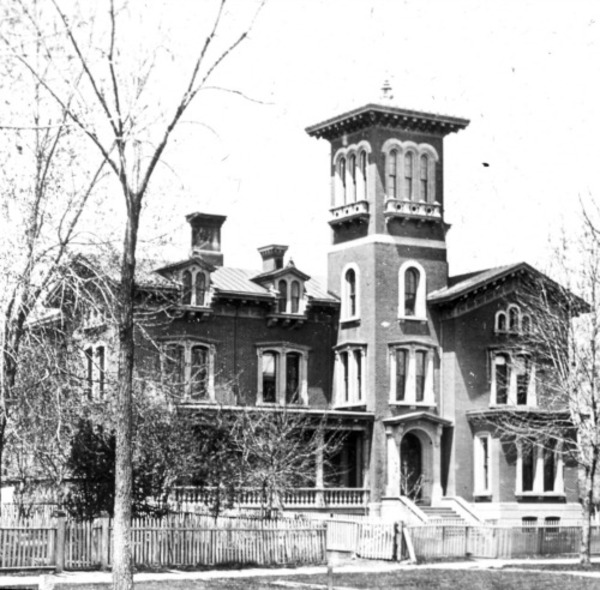