In the late 19th and into the 20th century, compulsory education into high school was spreading throughout the country. A need for intermediate and high schools arose, especially in rapidly growing cities, like Detroit.

The Hutchins Intermediate School's namesake was Harry Burns Hutchins (1847-1930). He served as the president of the University of Michigan from 1910-1920. Hutchins was also a superintendent of Owosso schools, a teacher and later an assistant professor of rhetoric and history at U-M, a Jay professor of law, dean of the Law Department and interim president. "He also oversaw the beginnings of an extension service to better serve the people of the state," according to his biography on U-M's website. The school was officially dedicated Oct. 26, 1922, with H.B. Hutchins in attendance.

The Hutchins School, as with nearby Crosman Alternative, was designed by the firm Malcomson & Higginbotham. The building was to also serve as a community center during after-school hours and summers, with meetings being held in the auditorium and locals using its gyms and pools. It was considered the "first in perfection of equipment and practicability," according to a Detroit Free Press article at the time of its opening.

From above, the school resembles an "E", with the outermost wings containing classrooms for 1,500 students. The center wing held the auditorium, which originally had seating for 750, a library above, community rooms and the school office. Across the way was the physical education wing with two gymnasiums, two pools and locker rooms, for boys and girls, along with the boiler room. It also contained a P-A-X —private automatic exchange — automatic telephone system, which allowed for calls without operators, though only within the building.

According to the Detroit Free Press, the school was "ideally situated in a residence district of attractive homes, its large athletic grounds bordering the grove of stately trees which form a natural park in the rear of Kiefer hospital, the Hutchins has the advantage of wide open spaces and beautiful vistas not often to be found in a populous section of a great city."

In 1959, the enrollment grew to 1,900. By the mid-1960s, the enrollment reportedly reached its high of more than 2,000. During the unrest of the summer of 1967, the school served as a field command post for the National Guard, with the troops sleeping in the halls and classrooms. Dr. Freeman Flynn was the principal of the school from 1964-68. Dr. Flynn was vacationing in Massachusetts at the time that the violence erupted, leaving his assistant principal, Reg Cicailo, in charge. In a Dec. 18, 2015, interview for the Detroit Historical Society's "Detroit 1967 Oral History Project," he recalled what he saw upon returning:

"I was not involved with the riots, but my school became a center for the National Guard. And then when that was over, why, an incident — the National Guard moved in, they couldn't find the switches for the floodlights in the parking lot, so instead of finding a light switch to turn them off, they shot them out, so that people wouldn't be able to get close up to them, with guns and so forth." Today, "those holes are still in the overhang in the roof."

Many nearby buildings and homes were ruined during the unrest, making the surrounding community unsafe and undesirable to live in.

"I was surprised when I heard it called 'the ghetto' in stories about the '67 riot," Tomlin said of the neighborhood in a 1969 Free Press interview. After 1967, the enrollment at Hutchins dropped, along with the city's population.

In 1968, 1,950 students were anticipated, but only 1,800 enrolled. Parents protested against the transfer of a couple teachers that year, eventually taking their case to the School Board and to court. Their case was unsuccessful.

The school's conditions worsened throughout the 1970s and '80s. During the 1989-90 school year, only 30% of the student occupancy of 1,500 was enrolled. Reportedly, $5.1 million was set aside for Hutchins Intermediate in a bond from 1994, mostly for the special education wing.

In 2002, enrollment fell to approximately 680. Despite the dwindling number of students, the quality of education at Hutchins drastically improved, opening opportunities for the students and the school. The year 2003 saw Hutchins students ranked high at several events, including the National Academic Games. AOL announced in 2006 that it would be creating the Detroit Academy for Sciences, Mathematics, and Technology AOL Computer Lab at Hutchins. In 2007, the nearly 400 remaining students at Hutchins Intermediate were transferred to the McMichael School on McGraw and 16th streets, 20 blocks away. The Crosman Alternative Program's 300 students moved into Hutchins, and stayed until the program ended in 2009, with only 230 students. The Hutchins Program at McMichael closed in 2011 with only 250 students enrolled.

Hutchins Intermediate was never properly boarded up after the 2009 closure, leaving an open invitation for scrappers. The vandals would regularly show up in U-Hauls, hauling away pieces of Hutchins by the truckload. Renee Gunn, whose family had lived in the area since 1969, recalled in a 2015 Detroit Free Press interview that "it was like they were showing up every morning to report for their job."

Despite being retired for more than three decades, Dr. Flynn couldn't help but feel saddened by the condition of the once prosperous school by 2014. "I have so much emotionally, psychologically, intellectually tied up with Hutchins School — to see it the way it is, I'm at a loss to tell you where are we? I don't know the answer to that. And it was the best job I had, even though I was only there for four years."

In 2013, Detroit Public Schools moved to sell Hutchins, and more than 70 other abandoned buildings, listing their price as "negotiable." The school was finally properly secured once it was sold in 2015. A New York-based developer, Ron Castellano, seized the opportunity to purchase the school, along with Kiefer hospital, Crosman Alternative, several other buildings and nearby houses, and formed the Herman Kiefer Development LLC.

In 2015, Castellano released his plans to renovate the structures. He seemed hopeful during a Detroit Free Press interview: "It's such a tight-knit area. Just talking to people strengthened what I believed. It still can be that great place it once was with enough focus and energy."

According to a 2017 Detroit News article, a 10,000 square foot skate park in the auditorium of Hutchins was planned to be completed by October of that year, but those plans were abandoned.

As of the April 2019 Neighborhood Advisory Council Update, the first part of historic preservation of the entire campus was complete. Some $2 million dollars in repairs and restoration are scheduled to be completed on the Kiefer campus by September 2019. With time, money, and teamwork, the Hutchins Intermediate School will hopefully be able to breathe new life, not only into itself, but into the community again, nearly a century after Hutchins originally came to life. 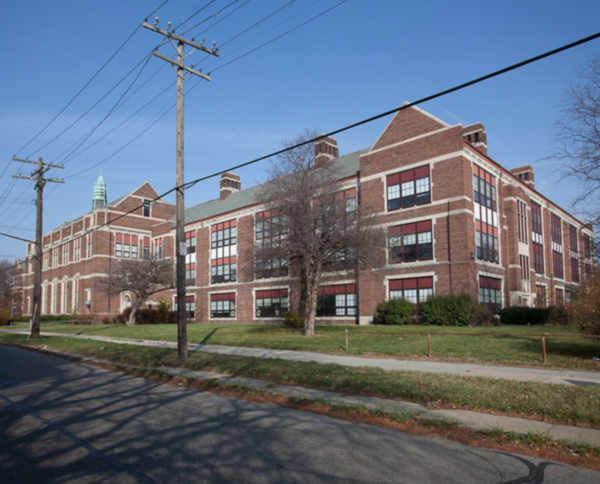