This school on the edge of Downtown and the Cass Corridor was once the home of one of Detroit's proudest educational institutions.

Cass Technical High School traces its roots back to February 1907, when it was founded on the third floor of the old Cass Union School, a three-story brick building built in 1860 on farm land donated by Gen. Lewis Cass on Grand River Avenue. The plot of land, today near downtown, was then a field filled with grazing cows on the outskirts of town. Gen. Cass was governor of the Michigan territory from 1813-1831; President Andrew Jackson's secretary of war; secretary of state for President James Buchanan; the Democratic Party's presidential candidate in 1848; and a minster to France. When Cass opened in 1907, Detroit had only three other high schools.

High school proved to be too much for many young Detroiters; records of the early 1900s show that only 35 percent of high-schoolers graduated, and only 10 percent went to college. Benjamin F. Comfort, the principal of Cass Union, suggested that fewer students might drop out if they were given industrial training that they could put to use in the city's growing number of factories. Detroit schools Superintendent Wales C. Martindale went to Europe in 1908 and studied technical schools there. Impressed, he decided to establish one in Detroit, and chose Cass for the experiment and put Comfort in charge as Cass Tech's first principal. The school opened with nine teachers, including Comfort.

The fledgling school started off with modest offerings — some commercial and shop courses. The idea was so revolutionary, many taxpayers opposed the idea as a frivolous waste of tax dollars. But the idea was a hit with the kids and enrollment jumped from 110 in 1907 to 700 by 1909. A new wing was added to the Cass Union School in 1909 to meet the demand, but the old building was destroyed in a fire just a few months later, on Nov. 16, 1909. The new addition, however, survived, and classes continued there and in a church at Woodward and Sibley avenues. Cass Tech graduated its first class in 1910, though it was only six or seven students. The next year, the council approved $225,000 (more than $5 million today, when adjusted for inflation) to erect this building on the site of Cass Union.

A new home for Cass Tech

This triangular-shaped building formally opened as Cass Technical High School on Oct. 23, 1912. It was designed by the Malcomson & Higginbotham, a Detroit firm responsible for a majority of the city's schools.

The school worked closely with businesses in the city, as employers often paid their students for time at Cass, gave teachers feedback and toured the facilities. As Detroit schools Superintendent C.E. Chadsey said in a district brochure, Cass Tech was for "the man who wants to be a better workman. … Surely there is no good reason why Detroit cannot have the largest percent of skilled workmen in every industry of any manufacturing center."

But even with the new quarters, Cass Tech's surging enrollment rendered the building too small by the time it opened. The waiting list for enrollment was limited to 200, but hundreds more applied, so the school started offering evening classes. Even then, it was said that it was nearly impossible to move through the halls during class changes. There were only 20 classrooms to serve 1,500 students a day, and there weren't enough lockers.

By 1915, Detroit was building two-thirds of the country's automobiles, and Detroit's population skyrocketed from 465,766 in 1910 to just shy of 1 million just 10 years later. The combination of the city's booming industry and booming population was enough to convince the city that a new building was needed. It took the Board of Education 11 campaigns to finally get the necessary cash, and construction didn't begin until 1916. But by the time the money was there, about $2 million ($28.7 million today), there was a war waging and the government had started clamping down on wartime spending, so construction was delayed yet again.

The Detroit firm Malcolmson & Higginbotham were selected once again as the design architects, and legendary Detroit architect Albert Kahn's firm was picked as the construction architects.

"It is by far the largest, most modern and most fully equipped of any high school not only in Detroit but in Michigan as well, and it ranks among the largest in the country," with room for nearly 4,400 students and 50 classrooms, the Detroit News wrote in September 1922.

The High School of Commerce

The new, eight-story Cass Tech finally opened Sept. 11, 1922, and cost about $3.93 million to build (about $50.9 million today). The High School of Commerce took over the old Cass Tech building, focusing on business education and serving as a finishing school for female students in such areas as secretarial skills, typing, penmanship, shorthand and bookkeeping. The new school's capacity was boasted as 3,600 students, and when coupled with Commerce High, there was room for 4,820 pupils. The schools shared Cass Tech's cafeteria.

The new Cass was connected to the High School of Commerce by the Victory Memorial Arch, a second-floor Gothic-style bridge that crossed High Street (later known as Vernor Highway). It opened Jan. 31, 1922, and was dedicated to the city's high-schoolers that died in World War I. Carved on a center panel in relief were the words, "Victory Memorial, Great World War, 1917-19." It was built to save time for the teachers and pupils changing classes between buildings and to protect from the inclement weather. The concept was designed by Mr. Ray, a Cass Tech English teacher and made of Indiana limestone. Its cost was $400,000 (about $5.2 million today).

With the rise of freeways, it was decided that the Fisher Freeway would run right through where the HIgh School of Commerce (and, of course, hundreds of other buildings). The school building was sold to the Michigan State Highway Department for about $1.1 million (about $7.72 million).

Augusta W. Ochs, the school's principal at the time, told the Free Press in May 1964 that "I did everything I could to preserve the school, even suggesting they run the freeway underneath us. The building is still solid. … But down it comes."

The old High School of Commerce was reduced to rubble in August 1964. The memorial arch went with it. 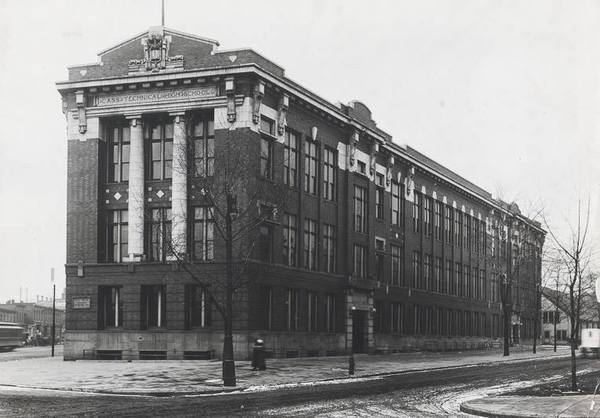