The auditorium officially opened March 3, 1964, with a philosophy lecture titled “The Supreme Court, Religion and the Schools.” The progressive topic, which was delivered by New York attorney Kenneth Greenawalt and University of Chicago Law School Professor Philip Kurland, was an apt introduction for the equally avant-garde venue.

While DeRoy Auditorium’s striking appearance signified a break from campus buildings of previous generations, the name given to the new facility was already well known in Detroit. Helen Lowentritt Deroy (1882-1977) and her husband, Aaron DeRoy (1880-1935) were Pennsylvania natives who moved to Detroit in the boom years of the late 1920s. Here, Aaron DeRoy amassed a small fortune as a distributor for Hudson Motor Car Co. The couple became involved in several philanthropic ventures, including the founding of the Detroit Zoo, which opened in 1928.

Seven years later, Aaron DeRoy died in an auto accident. Instead of selling her husband’s dealerships, Helen DeRoy both took over management of the business and founded a charitable foundation in his honor. In the coming years, DeRoy funded the construction of the Aaron DeRoy Memorial Building for Detroit’s Jewish Community Center on Woodward Avenue and Holbrook Street and contributed generously to post-Word War II reconstruction and relief efforts. To build the Wayne State auditorium, DeRoy gave the University $323,000, which the Detroit Board of Education matched. Another $1.7 million funded the simultaneous construction of nearby Prentis Hall. In the early 1970s, DeRoy made a second gift to Wayne State University, which was used to construct the Helen L. DeRoy Apartments.

“The look of serenity”

This is how Time magazine described Yamasaki’s designs in a January 1963 cover story, and no space more fully embodies the phrase than DeRoy Auditorium. The building consists of a single, steel frame rectangular volume clad in concrete panels. Though presently light grey in hue, when first constructed the building’s exterior was a brilliant white. The flat roof projects beyond the walls to produce a wide overhang with a narrow fascia. Vertical concrete ribs wrap all four elevations. These members increase in depth as they rise towards the roof and terminate in pointed arches. The negative space between each arch is mirrored in returns on the underside of the roof overhang to create a continuous cornice of 2-foot-deep diamond-shaped frames. The auditorium’s only fenestration consists of a band of round arched plate glass at the center of the east elevation and another on the west elevation. These openings contain the building’s two exterior entrances.

To emphasize DeRoy Auditorium’s formal simplicity, Yamasaki surrounded the facility with a 3-foot-deep reflecting pool. When filled, the pool gave the appearance that the building at its center floated lightly on the water’s surface. In a Washington Post article published two months after the auditorium opened the architect further explained this feature, which appears in many of his designs, saying “it makes a building with sympathy. More than that it can smooth rough edges. It is living.” While some have likened the reflecting pool to a moat, the architect clearly intended for the space to be an accessible feature, and placed a sunken courtyard with planters and concrete benches on the pool’s northern edge. On the southern side of the pool, wide concrete steps span the area between a sidewalk parallel to the auditorium and the water feature. The auditorium’s exterior entrances are accessed by way of wide concrete aggregate bridges whose curved edges invite views of the water below.

Yamasaki used DeRoy Auditorium’s simple massing and compact size to disguise a surprisingly spacious interior. The building contains two lecture halls, the smaller of which lies entirely below grade. The Gothic arched ribs of the exterior reappear on the walls of the 400-seat upper hall, where they terminate in a grid of sound deadening ceiling panels. Entrance lobbies are located on either end of the upper hall and contain open stairwells leading to the basement level. Both lobbies feature a row of three large pendant lights, marble floors, and teak auditorium doors. Perhaps the most ornate element of the interior is the staircases leading to the basement, which consist of polished wood railings on curving metal balusters above travertine treads and risers. The only ornamentation in the 300-seat lower hall is a curving rear wall made up of vertical teak bands.

Though Deroy Auditorium connects to the nearby Prentis Building only by an underground hallway, the two buildings were planned and constructed simultaneously as an “instructional cluster.” The formal differences between the auditorium and classroom facility reflect Yamasaki’s commitment to architectural variety, which he hoped would inspire surprise and enjoyment as visitors moved through the complex. To encourage this experience, Yamasaki designed a large, outdoor passageway through arcaded ground floor of the Prentis Building. From Cass Avenue, this opening frames the façade of DeRoy Auditorium and provides a visual contrast between the auditorium’s arched ribs and the rows of rectangles that comprise the exterior of Prentis Building. As visitors navigate the Prentis Building passageway, the materialization of the reflecting pool and generously proportioned courtyard produce a sense of discovery and invite exploration of the campus beyond.

By the mid-1960s, Yamasaki was well-known for employing a range of exotic and unusual sources – or what he liked to call the “little-explored fields” – to inform his designs. The architecture of DeRoy Auditorium drew on several of Yamasaki’s earlier commissions, most notably the Pacific Science Center. This building, completed in 1962 as an exhibition hall for the Seattle World’s Fair, bears similar arched ribbing to the DeRoy Auditorium. In both projects, Yamasaki described the curved embellishments as expressive of “sunlight and shadow, form, ornament,” and “the element of surprise.”

The repeated use of pointed arches in Yamasaki’s work is often attributed to the several Gothic cathedrals that the architect visited during a trip through Europe in 1954. Though such spaces certainly influenced Yamasaki, the ribbing of DeRoy Auditorium also denotes his fascination with Islamic design. In a 1961 New York Times article by renowned architecture critic Ada Louise Huxtable that asked famous architects to describe their favorite historical building, Yamasaki made clear this affinity with a poetic account of the Shah’s Mosque in Isfahan, Iran.

“Here there is no sense of being overpowered or overwhelmed,” the architect wrote, “one feels in touch with it and uplifted by it.”

Certainly this outlook, as much as the mosque’s colonnades of pointed arches, informed Yamasaki’s design for DeRoy Auditorium three years later. As an interesting side note, Yamasaki was one of only two architects queried by Huxtable who chose a building outside of Western Europe as their favorite. The other was Phillip Johnson, who maintained his reputation of bucking tradition by submitting not a building, but Ryoanji Garden in Kyoto, Japan, instead.

Beyond drawing on historic and far-off sources, DeRoy Auditorium represents an important evolutionary moment in Yamasaki’s design ideology. In his four decades of active practice, Yamasaki shifted his notions of how buildings should look and function several times. In the 1940s and early 1950s, the architect stuck to the tenets of high Modernism as espoused by architects such as Le Corbusier and Ludwig Mies van der Rohe. By the late 1950s, Yamasaki had rejected what he called the modernist “dogma of rectangles” and gained wide acclaim for dramatic buildings that boasted intricate details and a variety of materials applied to basic geometric volumes. The height of this period occurred in the architect’s first work on the Wayne State campus, McGregor Memorial Conference Center.

In the buildings that defined the second half of his career, this profusion of ornamental complexity was gradually subsumed into increasingly sleek yet still expressive designs. Yamasaki's design for DeRoy Auditorium, therefore, occurred during a pivotal stage during which he sought to merge detail and decorative program into his buildings. While still defined by the Gothic arch-inspired ribs that bind the exterior walls, DeRoy Auditorium features significantly less color, material contrasts, or elaboration than Yamasaki’s earlier works. In the years directly following the completion of DeRoy Auditorium, this practice would reach its zenith in Yamasaki’s deigns for the elegantly branched concrete verticals of the World Trade Center in Lower Manhattan.

Over its near half-century of use, DeRoy Auditorium has experienced few alterations. Like nearby McGregor Memorial Conference Center, the reflecting pool surrounding the building was drained at some point in the 1980s. As mentioned above, the exterior concrete panels have discolored somewhat, though the ribbing remains unbroken.

In the late 1990s, the original upholstered wooden seating in both of the auditoriums was replaced with rows of plastic molded seats. Both spaces have also been renovated slightly to accommodate new technologies, though the original projection booths survive. Like Yamasaki’s other Wayne State commissions, DeRoy Auditorium is now widely recognized as a significant element of Detroit’s mid-20th century architectural history. The auditorium and Prentis Building were listed together on the National Register of Historic Places in 2011. Currently, discussion is under way to restore the reflecting pool surrounding the building. 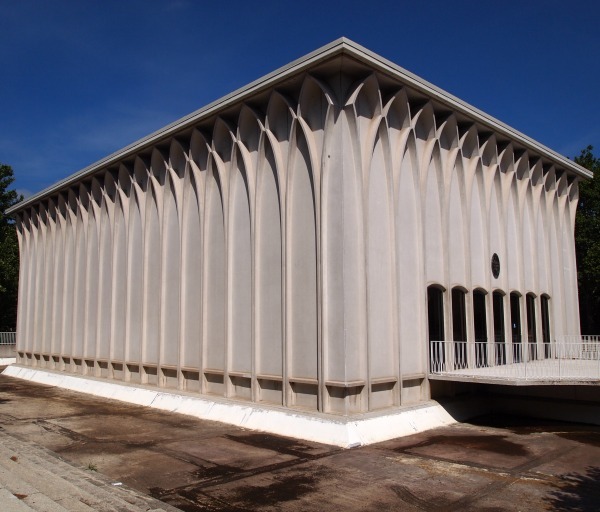