By ARTHUR M. WOODFORD for HistoricDetroit.org

Originally built as the wood night boat Northwest by the Rand & Burger Shipyard at Manitowoc, Wis., in 1867, the Greyhound would be drastically rebuilt a number of times.

It served for many years as one of the two cross-lake vessels of the D&C Line, until the company was profitable enough to order their own composite, iron and finally steel-hulled ships in the 1880s. Its conversion to a day boat was complete, after having her entire interior spaces gutted and refitted, and the Northwest was renamed the Greyhound in 1886. As an original member of the Star-Cole & Red Star Lines, the vessel was well known on the eventual White Star Line routes. The boat was leased to the White Star Line at its incorporation, but was never owned by the company outright.

In 1898, the Greyhound's owners went to the great expense of having its old style walking-beam engine completely rebuilt by the S.F. Hodge’s Riverside Iron Works at a cost of $30,000. The boat entered the 1899 season as a much sleeker-looking (and faster-moving) vessel.

By 1902, the White Star Line was ready to order its second vessel built for the company (after the Tashmoo) and purchased the recently refurbished Greyhound solely for its engine. A new, steel-hulled Greyhound was launched in February 1902. It would use the same 1867 engine until the whole vessel was finally scrapped at Toledo, Ohio, in 1936.

The old wooden hull of the first Greyhound would remain as an open sand barge until it was finally abandoned and cut up for scrap wood in 1907.

Another detail of the original Greyhound that carried over to her newer model, were the expertly carved larger-than-life greyhound dogs shown running in mid-stride on each side of her bow. They would be removed from the bow bulwarks of the old vessel, and were later attached to the new steel version namesake.

In 1925, the Greyhound was sold to the Red Star Navigation Co. of Toledo. Though the Great Depression, which hit four years later, would sink many excursion steamship companies. The Greyhound was laid up during the Depression years and fell into disrepair. She was eventually scrapped in 1935-36 by the Toledo Salvage & Sales Co.

The wooden carved greyhounds still survive at the Great Lakes Historical Society at Vermilion, Ohio, to this day. 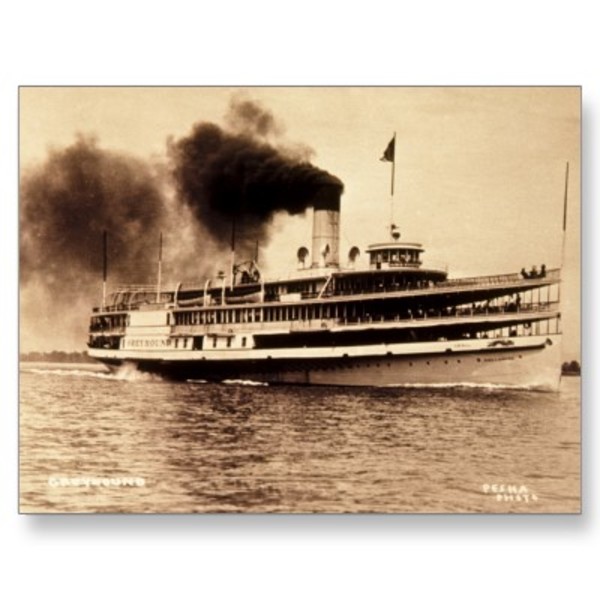