The Gregory, Mayer & Thom Co. Building was designed by Smith, Hinchman & Grylls for the Office Max of its day.

Alfred J. Mayer left Ann Arbor for Detroit in 1890, in order to enter the office equipment and supply field as an employee of the Richmond and Backus Co. Nine years later, he helped William B. Gregory and Charles Thom found Gregory, Mayer & Thom.

The company left its store on Woodward Avenue for this nine-story building, which opened on Cadillac Square near Randolph Street on Sept. 8, 1914. The structure replaced the old Central Market Building.

The building's construction was "looked upon by real estate men as the beginning of a new era for Cadillac Square, long given over to low, ancient structures and noisome odors," the Detroit Free Press wrote May 4, 1914. Before, "the square has not heretofore kept pace with the general rebuilding and improvement of the city." At the time of its construction, the building was said to be the largest building in the west devoted exclusively to office supplies and furnishings.

It sold office furniture, stationery and other supplies, and also did things like printing, bookbinding, engraving and lithographing. "Office furniture isn't the only attraction here. This firm's big, nine-story building features dependable values in office supplies, too. So it's only natural that business concerns throughout the state make Gregory, Mayer & Thom their one source of supply for all of their office requirements," an ad from 1949 boasted.

The company also had locations in other Michigan cities, including Lansing and Birmingham.

The firm stayed in business until the end of October 1977. The building was then demolished for a shopping mall that never was built. The site has been a parking lot ever since. 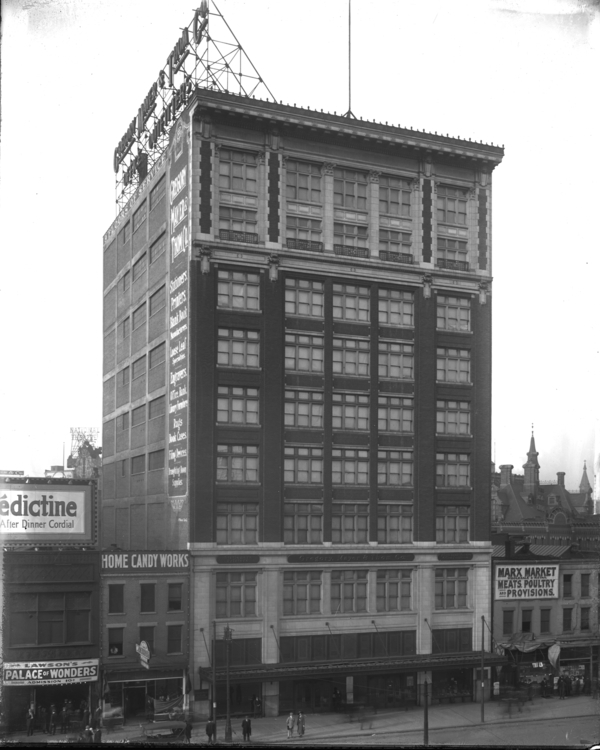