From the swinging sounds of jazz to the soulful sounds of Motown, the Graystone Ballroom is one of Detroit’s most storied music landmarks — though it is one that is all but forgotten.

Architect Rupert W. Koch’s first design for the Neo-Gothic building called for 10 stories, but it would end up only half that. And height wasn’t the only change from the original vision for the building. Had things turned out different, Detroiters might have been munching chop suey instead of taking a spin on the dance floor. The structure was to house a restaurant called the Chinese Gardens, but its owners went bust before it could be finished. It was then going to be known as the Trocadero, but that, too, faltered. Finally, Detroit bandleader Jean Goldkette stepped in and transformed the corner into the Graystone Ballroom. Doors opened with the All-University Ball on Feb. 27, 1922.

The block-long structure on the west side of Woodward Avenue between Willis and Canfield streets was finished in gray terra cotta. There were six storefronts and a large entrance hall of marble and cream-colored stone that led to the building’s office space, which faced Woodward. The ballroom itself was actually a separate building tacked onto the back of the five-story structure and offered “dancing the year ’round.” A large vertical marquee clinging to its façade broadcast where the action was: GRAYSTONE. The adjoining Graystone Gardens allowed couples to take that action to an outside dance floor during the summer.

Dancing was all the rage, and Detroiters were eager to strut their moves with the Charleston and the Lindy Hop. They flocked to the Graystone in droves to hear big bands fill the room with jazzy melodies. The ballroom was huge, with room for 3,000 dancers — 4,000, it was said, if they danced close. Couples would waltz under a 60-foot-high domed ceiling, or they could take a breather and watch the action from a balcony that ringed the dance floor. Elegance was everywhere, from marble staircases and hand-carved railings to a circular fountain. “In addition, color changes have been worked out so that with the use of spotlights and floodlights, many unusual and beautiful lighting effects can be obtained during dance numbers,” the Detroit Free Press reported ahead of the Graystone’s opening. “Beauty, grace and dignity are the first impressions received from a visit to the structure,” the paper wrote. “Little conveniences and comforts are discovered at every turn.”

The ballroom was immensely popular, and many jazz greats took to its stage, including Glenn Miller, Duke Ellington, Billie Holiday, Ella Fitzgerald, Count Basie and Guy Lombardo. McKinney’s Cotton Pickers and Jean Goldkette’s Orchestra became nationally renowned while playing at the Graystone. Benny Goodman, heralded as the King of Swing, said he once drove all night from Chicago to see the legendary Bix Beiderbecke when the coronet player was part of the Graystone’s house band in the 1920s. Some have called the Graystone Detroit’s “cradle of jazz.”

Like other ballrooms, such as the Vanity and the Grande, the Graystone had theme nights. Wednesdays were Boy Meets Girl Night. But also like most Detroit ballrooms at the time, the Graystone was segregated and catered to mostly whites. Monday nights were for blacks. “Graystone Ballroom and Graystone Gardens was where we went on Monday nights, the only night colored people could go,” Berry Gordy Jr. wrote in his autobiography. “That was our night. Everybody who was anybody would be there, dressed to kill.”

Goldkette filed for bankruptcy in 1935, and the University of Michigan bought the building and soon leased it to Fred W. Haynes and Francis Steltenkamp. But jazz and ballroom dancing soon fell out of fashion. From 1950 to 1957, the partners lost $75,000 — the equivalent of more than $600,000 today — and they owned thousands more in rent to the university. “There was a time when we turned ’em away Saturday nights,” Haynes told the Detroit News. “Now, we lost money by staying open.” The partners went from packing the dance floor five nights a week to being open only on Wednesdays and Saturdays. People just didn’t dance anymore. After nearly 25 years of running the show, Haynes and Steltenkamp called it quits, holding their last dance on Nov. 30, 1957.

Howard Pyle took over, but things only got worse. Pyle was accused of admitting minors — some as young as 12 — through the doors. On Aug. 15, 1958, Mayor Louis Miriani threatened to relieve Pyle of his business license. Then two teens were busted with marijuana in November 1958, and Pyle was charged with permitting five underage girls into the Graystone after midnight in April 1960. To settle the case, the Graystone agreed in August 1961 to issue photo ID cards as a way to screen underage customers. The University of Michigan announced it would conduct a study of the Graystone’s operations.

As tastes changed, the Graystone started booking record hops and R&B acts, including Detroit legends Jackie Wilson and Little Willie John, who often found themselves trying to upstage each other on the same bill. While these soulful crooners could pack the house, it wasn’t enough to keep the Graystone in the black. But it just so happened that a young record company executive was looking for a way to showcase his roster of young talent. And he had fond memories of the Graystone.

Gordy Jr. borrowed $800 from his family and established Motown Records in January 1959. Within a few short years, he had scored hits with acts like Marvin Gaye, the Marvelettes, the Miracles, Martha and the Vandellas and Mary Wells. But in 1960s Detroit, many of the black performers had a tough time getting gigs. Around June 1963, Gordy bought the Graystone for $123,000 — a little less than $1 million today — and planned to run it as a supper club and host “Battle of the Bands” competitions. Not only could black Detroiters now see a concert any day they chose, not just on designated “colored nights,” but also Gordy thought that having his acts perform in such a grandiose setting would lend more polish to his young stars. Under Gordy’s direction, Motown installed a spiffy new sound system at the venue. An associate suggested that Gordy rename the Graystone, which by then had lost much of the fame and glamour of its glory days. Gordy refused, saying that the memories of the good old days would lure new audiences.

“A girlfriend told me about the Graystone Ballroom,” soul singer Bettye LaVette wrote in her autobiography, "A Woman Like Me." “Mama warned me to stay away from the Graystone, which, of course, made it more enticing. … I pushed up my bedroom window, crawled out, took those three little steps, and hit the sidewalk running. They were all there: Otis Williams and the Distants, who would soon become the Temptations. The great David Ruffin, who would soon lead the Temptations. The Miracles with green-eyed Smokey. Mary Wells, who was singing Smokey’s songs.”

The Graystone hosted some shows, but dollar signs were one of the few things that trumped racial barriers in those days. As Motown became a household name, its stars quickly found themselves in demand. Why would Gordy’s Motortown Revues play to only a couple of thousand at the Graystone when they could pack the house at far larger venues like the Fox Theatre? Motown would sometimes use the Graystone for a rehearsal room or for parties, but for the most part, it remained silent — and rotting. When Motown abandoned Detroit for Los Angeles in 1972, the Graystone’s fate was sealed.

In the early 1970s, a fire next door damaged the Graystone’s roof. The ballroom’s broken windows and general state of disrepair were an open invitation for vandals to descend on the building. With Motown firmly established in Los Angeles, the Motor City was an afterthought, and the Graystone quickly became a real eyesore. Not even its legendary marquee remained to mark the spot of so much Detroit music history.

James Jenkins, a retired streetcar and bus driver, founded the Graystone International Jazz Museum in 1974. He dreamed of saving the landmark and turning it into a museum. By the end of the decade, however, Motown announced that it would level the old ballroom. “What we need now is to find out if the public wants to save the Graystone and to get financial support,” Midge Ellis, a spokeswoman for the group trying to save it, told the News.

Music historian James Dapogny wrote the News a letter to the editor in 1980 in which he warned that the demolition of the Graystone “would be a great cultural loss to the city and to the country.” He wrote, “The Graystone was host to nearly every important band in the country, and nearly every important jazz musician, black or white, played there.” But sentimentality and memories alone weren’t going to be enough to spare it.

“I like the idea of saving the Graystone,” Esther Gordy Edwards of Motown told the News, “but I wonder if it’s too late?”

The wreckers arrived on July 19, 1980, and commenced erasing the storied ballroom from the city’s skyline. This corner had hosted countless jazz legends and many of Motown’s brightest stars and was home to countless memories of tangoing and twisting the night away. Today, it is home to only Big Macs and McNuggets; a McDonald’s restaurant now occupies part of the site. 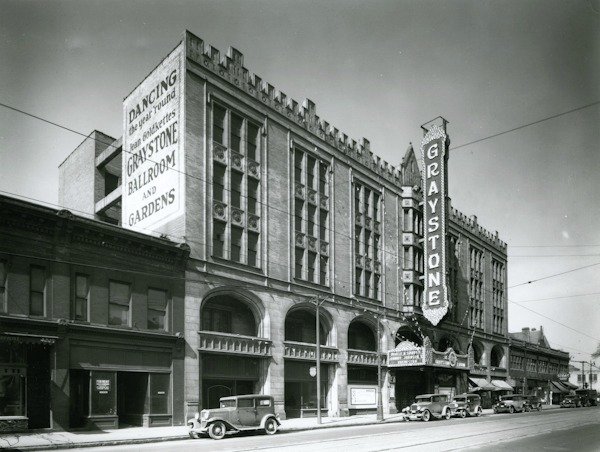