For generations of Detroiters, the products of Gordon & Pagel were the best thing since before bread came sliced.

In 1900, James C. Gordon and William M. Pagel entered a partnership, setting up shop at Chene and Hendricks streets. It would go on to become Detroit's most prolific bakery, pumping out 150,000 loaves a day from this factory on the east side.

Gordon was born in Greenfield Township, Mich., in Wayne County, on Feb. 16, 1873, to Scottish immigrants. As a young man, he worked for and Morton Baking Co. in Detroit for nearly a decade. Pagel was born in Detroit to German immigrants on June 3, 1874. He had spent eight years at Koch Grocery before starting his own store in 1895 at 222 Field St., which he ran until selling it to go into business with Gordon.

Things started small for the two entrepreneurs, with only two men working in the baking department, and Gordon and Pagel themselves serving as their own salesmen and delivering the bread to stores.

By 1907, however, the business, like their loaves, was steadily rising and their factory expanding. That year saw the company build a 100-by-60-foot stables for its 50-plus delivery horses on the southeast corner of Chene and Hendricks. That same year also saw a permit pulled for a two-story addition that was designed by the Detroit firm Pollmar & Ropes. The price tag for that project was $10,000 (about $278,000 today, when adjusted for inflation). The factory fronted 210 feet along Chene and 100 feet on Hendricks.

During an era in which food safety and cleanliness was a big deal, the breadmaker found at least one notable fan of its sanitary facilities.

"An inspection of the plant of the Gordon-Pagel Bread Company, the most modern in the city, can not but compel the observer to recognize that baker's bread may be made thoroughly wholesome and more palatable than is the average domestic product," renowned Detroit historian Clarence M. Burton wrote in 1908 in his "The City of Detroit and Wayne County, Michigan." "Here are to be found concerns whose every effort has been to produce for the use of the consuming public a grade of food requisites of the highest possible standard and prepared under the most perfect sanitary conditions. The absolute cleanliness of the establishment in every department and the strict regard to modern sanitary precautions and provisions, together with the scientific methods employed in the treatment of the materials used, proves a revelation to one who has not previously familiarized himself with the workings of baking establishments of the highest type."

The rapid growth of their business led to the company's incorporation on July 16, 1907, with a capital stock of $75,000 (more than $2 million today, when adjusted for inflation). Gordon became its president and Pagel its secretary and treasurer.

At this point, their modern plant was pumping out 50,000 two-pound loaves of bread every day, and employed about 100 men. The company sold only wholesale to stores in Detroit and its surrounding suburbs.

Among their early popular brands were the Butter Nut and the Merry Widow, which were sold across the region in Gordon-Pagel's trademark polka-dot wrappers.

On April 27, 1909, tragedy struck at the plant when a gruesome accident made headlines in the papers. Baker Joseph Jakubiak, 22, was crushed to death "before he could so much as utter a cry," the Detroit Free Press sensationally wrote in the following morning's paper. He was caught in a mixer, breaking his legs and crushing every rib in his body. He apparently neglected to shut off the power to the machine before climbing into the 3- to 4-foot deep mixing bowl to clean the equipment.

But for the most part, the company made bread, not headlines, and stayed out of the papers aside for advertisements.

Catch her if you can

The bakery employed some pretty unique advertising methods to boost their sales. One of the more fun ones involved a treasure hunt of sorts in which Detroiters had to track down "the Butter-Nut Bread Girl" and recite a code phrase in order to win money. One of these quests from 1912 sent Detroiters out to certain locations at certain times to track her down and, if they presented her with two Butter-Nut bread wrappers and said, "Pardon me, you are the mysterious 100 percent pure Butter-Nut Bread Girl of the Gordon-Pagel Bakery Co.," they would win $100.

Whenever someone was successful, the papers would run ads that looked like newspaper articles with headlines like, "Butter-Nut Bread Girl captured Saturday night; the second reward of $100 is paid to captor." When she eluded detection, the ads would describe her as being "still at large."

Despite such headlines, the contest's rules were very clear: "When accosting the Butter-Nut Bread Girl, do not touch her whatsoever. Should you do so, you will forfeit the reward." It is unclear whether those rules were put into place because of someone taking the game too far.

In 1914, the firm hired Pollmar & Ropes again to build another addition, a 105-by-56-foot storage facility on Chene and Dubois, and architect Harry S. Angell a few months later to design a 30-by-105-foot wagon storage facility. In 1921, Gordon & Pagel tapped Pollmar & Ropes again, this time to design a new one-story garage on the north side of Cleveland (now known as Vernor) between DuBois and Chene.

The year 1926 saw major changes, including the renaming of the company as simply the Gordon Baking Co. It is not clear when Pagel bowed out of the firm, whether it was at that time or earlier. The company had already expanded from Detroit into Chicago, and a new product was about to see its reach expand even further.

The firm really started raking in the dough with the introduction of Silvercup bread, a mainstay on counters in Detroit and beyond for decades.

Gordon Baking Co. first sold Silvercup in Detroit on May 11, 1927, taking out ads in the local papers trumpeting its arrival and boasting that it was "better than the best of old-fashioned breads, finer than the finest of modern private brands." The company had initially rolled out Silvercup in Chicago, where it had skyrocketed in popularity, going from selling 4.2 million loaves in 1921 to 34.3 million loaves just five years later. The bread was touted in ads as having "dainty slices that just fit the toaster."

Silvercup was extremely popular in New York, where Gordon Baking Co. had Pollmar & Ropes design an enormous 500,000-square-foot plant in Long Island in 1929, devoted largely to producing the brand.

During the 1930s and '40s, Silvercup was unquestionably Detroit's leading bread brand, and that was due in part to its sponsorship of WXYZ radio's popular "The Lone Ranger" program. As part of Silvercup's sponsorship deal, the name of the Lone Ranger's horse was changed from Dusty to Silver, and the slogan, "Hi ho, Silver, away!" became known around the country then and to this day.

By 1937, Gordon Baking Co. had four plants, including the east side facility on Chene and Vernor, the massive Long Island plant, the birthplace of Silvercup in Chicago and another on the west side of Detroit, which helped get fresh bread to the hungry mouths of west siders and suburbanites.

Pagel died Sept. 5, 1947, at his residence in Detroit, in what is now the Park Shelton. He is buried at Woodlawn Cemetery in Detroit.

Gordon, who had moved out of the Motor City as his company expanded, died March 5, 1945, at French Hospital in New York City. He had established a foundation that took control of most of the company's stock upon his death, but that organization sold its interests in the baking company in 1964. No longer having any affiliation to Gordon, the bakery's name was changed to Silvercup Bakers Inc. In 1968, that company's owner, Harold D. Gottfried, died and the firm soon spiraled into Chapter 11 receivership.

On Nov. 2, 1970, a court ordered the Silvercup plant in Detroit - then listed at 2303 E. Vernor - to be shut down. Its 275 employees were notified by telegram during the weekend and told not to report for work the following Monday. News reports at the time said that as part of the restructuring deal, the New York plant was allowed to keep running at the cost of sacrificing the Detroit operations. It is not clear based on our research so far whether the plant later reopened under another company or closed for good at that time, though news reports on the facility's closure did say there were interested buyers. It also is unclear when the Detroit plant was demolished.

At the time of its closure, the plant encompassed nearly 300,000 square feet, including 552 feet along Vernor and 230 along Chene and DuBois streets.

The baking equipment, delivery vehicles and other assets from the Detroit plant were liquidated at auction on Jan. 21, 1971.

The Long Island plant continued producing the brand until 1974, when it closed during a workers strike and never reopened. The facility still survives today but makes something other than bread: In 1983, it became known as Silvercup Studios, honoring the building's history, and is one of the largest film and television production facilities in New York.

Silvercup continued to be baked elsewhere and sold in stores in Detroit into the 1990s.

An apartment complex was built on the vacant site of the former Detroit bakery in 2019. 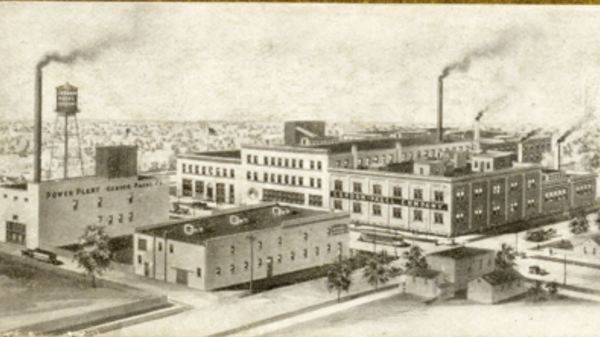