Stroh's is perhaps the beer most synonymous with Detroit, but the Motor City was once home to a slew of brews.

One of the more popular and longest lasting was Goebel, a beer made on the city's east side at Rivard and Maple streets. It was brewed in Detroit from 1873 to 1964, other than during Prohibition, and was sold until 2005.

August Goebel Sr. was born in Münstermaifeld Rhenish, Prussia, in 1839, and immigrated to the United States when he was 17. The story goes that he was originally headed for Chicago but ran out of money on the way, landing in Detroit. During the Civil War, Gobel enlisted in the Union Army's 2nd Michigan Infantry Regiment and fought at Bull Run. He rose through the ranks and became a colonel. After the war, he and partner Theodore Gorenflo founded A. Goebel & Co. in 1873. His German-style, dry, light lager was an instant hit, and by the 1880s, Goebel was already the third largest brewery in Detroit, thanks in part to Goebel consolidating the Mann, Michenfelder, Bavarian, Andries and A. Goebel breweries that were all clustered together near Gratiot Avenue into one company.

The beer was marketed as being "from the cypress casks of Goebel."

Like most multi-building industrial complexes in Detroit, the plant would grow many times and see a number of architects employed as demand grew and production processes changed over the years.

In 1879, the company built a new facility on the eastern outskirts of downtown, at Rivard and Maple streets. The following year, the frame brew house was razed and replaced by a brick structure. In 1890, Goebel's first expansion after the consolidation of the five breweries was to erect stables for its horses used for deliveries. In 1891, a new stockhouse and refrigeration house were built. In 1893, a new office building went up on the southwest corner of Maple and Rivard.

In April 1894, to meet growing demand for the beer, the firm Brede & Mueller began work on plans for a new brew house and wash house on the southeast corner of Maple and Rivard. The brew house was five stories high with a 115-foot tower on the corner; the building was 46 feet by 56 feet. The firm also handled renovations for the existing plant.

Col. Goebel died at 66 on Nov. 26, 1905, from apoplexy. His passing was front-page news in the local papers. The Detroit Free Press eulogized him by saying, "For many years, he had been one of Detroit's foremost citizens ... a success in life through perseverance and the application of hard business sense." In addition to running the brewery, Goebel also served as a superintendent of public parks, a state representative, a Detroit City Council member, president of the water board and other civic positions. He is buried at Elmwood Cemetery.

After his death, his son August Goebel Jr. took over the business, significantly growing both the plant and the beer's distribution, with the beer being sold in several other states.

In 1908, Goebel's bottling facilities were doubled, and then they were doubled again just two years later. Just two years after that, in 1912, they were doubled yet again. The extensive additions to the plant increased the facility's production by 60,000 barrels a year. In September 1909, the Detroit firm Smith, Hinchman & Grylls was hired to design a 40-foot by 100-foot brick addition to the brewery's warehouse on the west side of Rivard between Sherman and Maple streets.

"In equipment, it is said to be one of the model breweries in the country," the Detroit Free Press wrote in April 1912. "One of the most noticeable features to the visitor is the absolute cleanliness and the rigid precautions taken to secure a product that is perfect in its wholesomeness and freedom from any contamination."

But all of that expansion and growth of draught was for naught. The introduction of Prohibition, which banned the production and sale of alcohol in the United States, led to Goebel's closure. In December 1917, the 18th Amendment was passed by Congress and sent to the states for ratification. The following year, Goebel was liquidated and the company dissolved. In 1920, the 130,000-square-foot Detroit plant was sold for light manufacturing and storage for $250,000.

With Prohibition's end in 1933, Goebel set out to get back to work, reacquiring at least some of its old factory buildings and hiring the Detroit firm of Harley & Ellington to design new buildings and to modernize the old plant. The brewery resumed production in 1934, and quickly regained its standing as one of Detroit's leading source of suds.

Since its inception, Goebel had used a a bold, sleek "thunder eagle" as a logo, but given the similarities to a symbol appropriated by the Nazis, changed the eagle to a more American-looking bird of prey. By the 1950s, Goebel transformed him into a rooster, Brewster the Rooster, and sold 8-ounce "Bantam" cans. The rooster mascot was a popular and widespread advertising staple, particularly during Detroit sporting events.

Goebel hit its peak in the 1950s, reaching a peak production of 1.3 million barrels of beer in 1953. It sought to buy out rival companies and expand across the country. In 1946, Goebel bought out the Grand Rapids Brewing Co., and then a year later, purchased the Koppitz-Melchers brewery in Detroit. In 1950, with eyes on reaching the shelves on the West Coast, Goebel absorbed the Golden West Brewery in Oakland, Calif. In 1955, the Detroit facility underwent a multimillion-dollar modernization.

Though Goebel was able to bounce back from Prohibition, the blue-collar favorite could not survive, coincidentally, a labor issue. Right on the heels of its rampant expansion efforts, which had stretched the company financially, there was a brewery workers strike in Detroit in 1958 that went on for almost two months. Though not a seemingly long strike, Detroit's factory workers loved their beer, and the proportion of beer made out of state that was sold in Michigan rose from 33% to 42% during this period. Just seven years after producing 1.3 million barrels a year, Goebel was selling only 300,000 in 1960 -- and it was only downhill from there, dropping to about 215,000 barrels three years later.

WIth its sales having fallen flat, the brewery was sold in 1964 to its rival Stroh's, which continued to bottle the brand, marketing Goebel as a low-priced budget beer.

Stroh's, which had a much larger facility across Gratiot from Goebel's, did not need the facility, especially in such proximity to its own giant bottling plant, so it converted the Goebel factory into a plant for Stroh's ice cream brand. Coincidentally, Stroh's bottling works were imploded in the 1980s, and yet several buildings from the Goebel factory still stand.

Eventually, Pabst Brewing Company acquired Stroh's and their other brands (including Goebel), and continued making Goebel until the end of 2005. 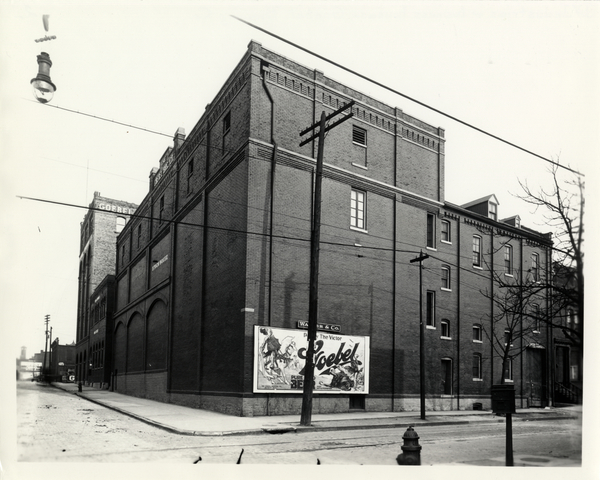