Not to be confused with the metro Detroit food bank of the same name, the Gleaners Temple was a stately building on Woodward at Palmer, near what is now the north end of Wayne State University’s campus.

The Greek-temple-inspired building was built in 1909 for a Christian life insurance group.

In October 1894, Grant Slocum met with 35 other like-minded farmers and founded Almer Arbor No. 1, Ancient Order of the Gleaners. Based in Caro, Mich., they were a fraternal society, and the group provided benefits and funds to members of the group who needed it, such as widows and orphans of deceased members. At the time, the group had 220 members. Articles of incorporation were drafted by attorney Walter Gamble, and the Michigan Insurance Commission granted them a charter that year.

“Gleaning” refers to going back over a field, looking for stray food left behind.

When the organization grew, the national headquarters was moved from Caro, in Tuscola County, to Detroit. In May 1908, plans were announced for the building on Woodward designed by George L., Harvey, an architect based in Port Huron. The Gleaners Temple was fashioned after the Temple of Victory in Athens, and it was constructed of Bedford stone. It stood on the corner of Woodward and Palmer, which at the time, was at the edge of a growing upper-middle class neighborhood.

The front of the building was striking and stately, featuring four columns. Inside, the 6,500-square-foot space had a large mahogany staircase in the center of the building, 14-foot dropped ceilings and large windows to let in light.

In 1931, the group changed its name to the less cryptic Gleaner Life Insurance Society. The ceremonies and offices of the group were based on the Book of Ruth from the Bible.

A three-story addition, designed by architect Lawrence B. Jameson, was tacked onto the back of the building in the 1940s.

Though group membership was originally open to only farmers and gardeners, the group was later opened to any Christian older than 16. Membership started to decline, from 55,000 in 1969 to 47,000 in 1979, and down again to 43,000 in 1993. By 1979, the group was headquartered in Birmingham, Mich., so it is likely that the group sold the Gleaners Temple before that. Currently, the group is based in Adrian.

Wayne State's Newman Club, an organization for Catholic students, used the Gleaners Temple as a meeting place during the 1970s. It was around this time that the building became known as Newman Hall.

Unfortunately for the building, it was built in the path of Wayne State’s growing campus. After serious financial and enrollment issues in the 1980s, WSU’s enrollment rebounded in the early 1990s. More students meant fewer places to park, and by the mid-’90s, parking was a hot issue with both students and faculty. The university’s solution was to demolish aging but historical buildings, creating infamous “mud lots” for extra parking.

President David Adamany had butted heads with Preservation Wayne (now Preservation Detroit) on issues from knocking down 1920s-built apartments on campus, like the Sante Fe apartments, to preserving the one-time center of student life on WSU’s campus, Mackenzie Hall. It was under Adamany’s tenure that the stately Webster/Mackenzie Hall was imploded, and the final row of historical homes from the university’s days as a neighborhood were torn down. Also on the same block as Gleaners, on Palmer, was the 1884-built Sprague House, which Preservation Wayne and WSU officials had butted heads over for several years. The Sprague House was torn down in 1994 to make way for the modern glass and brick Academic Services Building.

In December 1994, Wayne State’s Board of Governors unanimously voted to purchase the Gleaners Temple and an empty lot next to it for $250,000. The building was owned and had been occupied by the Michigan Health Care Corp., which had begun doing work to update the building’s aging mechanical, electrical and plumbing systems.

Preservation Wayne put together proposals from architects, such as Doug McIntosh, architect and planner of McIntosh & Poris, and presented its plans to the Board of Governors. The group recommended knocking down the three-story addition on the back of the building, but save the temple itself. A nearby law firm, Charfoos & Christensen had been interested in leasing space in the building — but backed off when it discovered that the university owned the property. Charfoos would later move into another historic building on Woodward, the Col. Frank J. Hecker House. The preservation group had also introduced plans to turn the temple into a natural science museum.

At the board meeting, Katherine Clarkson, then-director of Preservation Wayne said: “We are concerned that the expenditure to create a small number of parking spaces ... is not necessarily the highest and best use of that property or the university’s money.” She added that the building “is an extraordinarily strong architectural statement on the main grand avenue of Woodward.”

Demolition was delayed until 1996. However, the Board of Governors and WSU president didn’t think the cost of rehabbing or mothballing the building was worth it.

“After carefully considering these alternatives, and some other possible alternatives, I have reached the conclusion that it will be necessary to demolish the Gleaners Temple,” Adamany said at the September 1996 board meeting.

And like Mackenzie Hall before it, Gleaners was torn down to make way for parking. 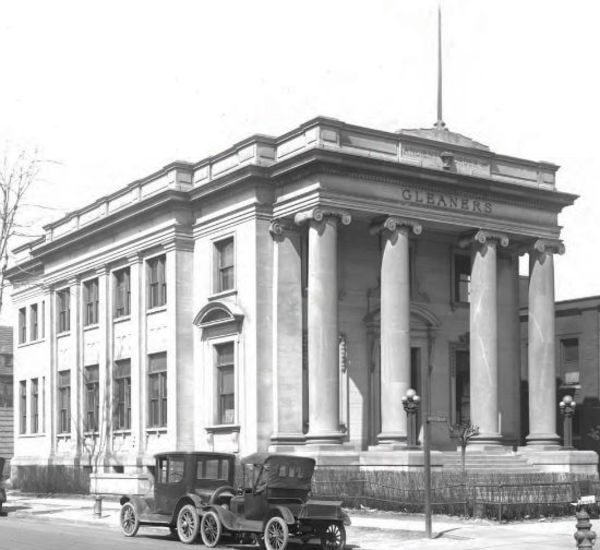