The Garrick was a beautiful theater, but it will always be remembered for being the site of legendary magician Harry Houdini's final performance.

In 1875, C.J. Whitney opened an opulent theater the likes of which Detroit had never seen. This was the pre-motor Motor City, after all, and the city was still rather small. Never the less, Whitney dropped $135,000, the equivalent of about $3 million today, to erect the Whitney Grand Opera House.

But just 10 years later, Uncle Sam decided he wanted to plop his new federal building on the site of the theater. Whitney's theater was “the most elaborately equipped playhouse in the city,” and its opulence “nearly upset the plans" to use the site, Malcolm W. Bingay wrote in the Free Press in November 1931. But Whitney sold the building and land to the feds and built himself a newer, bigger theater. He called this one Whitney's New Grand Opera House. This structure, on Griswold, just north of Michigan, is the building that would later be renamed the Garrick Theatre.

The theater opened at 1122 Griswold St., on Oct. 31, 1887, with "A Chip Off the Old Block," a popular comedy of the day. The 1,409-seat theater was designed by Chicago theater architect J.M. Wood. It was in the heart of what was then the city's financial and retail district. At first, it showed old melodramas, but soon became a high-class theater and the home of legitimate attractions.

"This graybeard recalls how, as a lad, he saved his pennies throughout the week so that he could have a dime for the Saturday matinee," George W. Stark of the Detroit News recalled in 1957. Writing in the third person, he said: "He struggled three flights up the winding wooden stairway against heavy opposition, but (to hear him tell it) he always landed in the first row. This had obvious advantages, for it gave him an unobstructed view of the exercises on the stage, and it enabled him to throw his peanut shucks over the ledge on the more affluent customers below. The had reserved seats, which cost 30 cents; and there also was a balcony where the price was a modest 20 cents a stall.

"The spectator in my locale ran the risk of ejection at the hands of a bouncer named Fred 'Kid' Wellman. He carried a heavy cane, and when the curtain was about to rise, he rapped three times against the back wall and shouted, 'Hats off!' This was paradise, this gallery, and from its eminence, I viewed such classics as 'Bertha,' 'The Sewing Machine Girl,' 'The Curse of Drink,' 'Nellie,' 'The Beautiful Cloak Model' and "The Span of Life.' "

The theater saw its business drop with the arrival of motion pictures, but it soldier on as a playhouse. Detroit Free Press publisher E.D. Stair acquired the old opera house and reopened it as the Garrick on Sept. 6, 1909.

The Garrick was "an institution which was really responsible for putting Detroit on the theatrical map in large letters, and figures, too," the Detroit Free Press wrote in 1928. "Until the Garrick was opened ... Detroit was rated in theatrical parlance as a 'three-night town.'"

Each year, Jessie Bonstelle brought her stage company to the Garrick. Bonstelle would go on to turn the former Temple Beth El into the Bonstelle Theatre.

"The Garrick era was a time of glamour and romance," Stark reminisced.

Houdini gave his final performance on Oct. 24, 1926, at the Garrick. Accounts of the show say Houdini seemed off and not right. This was because he was suffering from acute appendicitis and was battling a temperature of 104. The magician was taken to Grace Hospital the next day. At 1:26 p.m. on Oct. 31, in Room 104 at Grace, Houdini died at age 52. It was Halloween. The official cause of death was peritonitis from a ruptured appendix.

The Garrick would soon follow Houdini off this mortal coil, bowing to changing tastes and changing times. The old, grand theater was obsolete compared with the massive movie palaces popping up around it, and on Aug. 11, 1928, the Garrick closed. The final show was a performance of "Ringside," Gene Buck's "pulsating play of pugilists and metropolitan night life." It was torn down in early 1929, making way for a three-story structure initially known as the Cunningham Building, a 12,000-square-foot drugstore. It was designed by Smith, Hinchman & Grylls. In the 1950s, the site was home to a drugstore.

The abandoned, nondescript building still occupies the site of the Garrick. 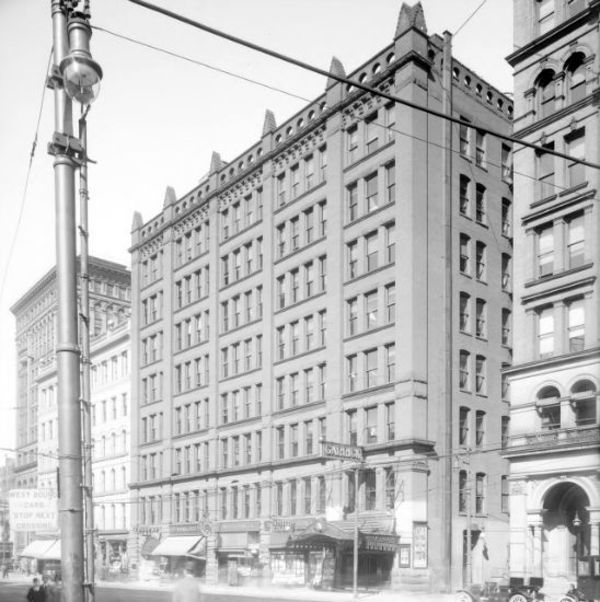