In the 1870s and 1880s, stoves were Detroit's leading industry, thanks to the abundance of iron ore in Michigan's Upper Peninsula and ease of transporting it on the Great Lakes, especially following the opening of the Soo Locks in Sault Ste. Marie, Mich., in 1855. (Iron ore is used to make steel and iron, required at the time for stoves.)

Indeed, Detroit would become known as the Stove Capital of the World, and was home to the "big three" of stove manufacturers: the Detroit Stove Works, the Peninsular Stove Co., and the Michigan Stove Co., which claimed to be the biggest stovemaker in the world, with 1,200 employees and pumping out more than 75,000 stoves a year. Michigan Stove produced Garland stoves; Detroit Stove called its products Jewel.

As part of the Columbian Exposition of 1893 in Chicago, Michigan Stove commissioned the building of a giant wooden replica of a Garland stove. And giant is no understatement: The stove weighed 15 tons and measured 25 feet high, 30 feet long and 20 feet wide. After the exposition's closure, the stove was sent back to Detroit.

Michigan Stove and Detroit Stove merged in 1927, and the giant stove was moved to 600 E. Jefferson, just west of the Douglas MacArthur Bridge to Belle Isle, where it remained until 1965. It was then trucked up to the Michigan State Fairgrounds, a crew lifting traffic lights and utility lines out of the way. The Detroit-Michigan Stove Co. had been bought out by the Welbit Co. in 1955.

But as the stove passed 80 years of age, the wooden structure was starting to decay. It was disassembled in 1974 and placed into storage, where it sat for nearly a quarter of a century. Then, to mark the 150th anniversary of the Michigan State Fair, local business, community and union leaders came together to restore the stove. It was rededicated on a grassy knoll at the Fairgrounds on Aug. 24, 1998.

In 2009, citing budget restraints, the Michigan State Fair was closed, cutting visitors off to the stove.

On Aug. 13, 2011, the giant stove was destroyed by fire, the apparent victim of a lightning strike. 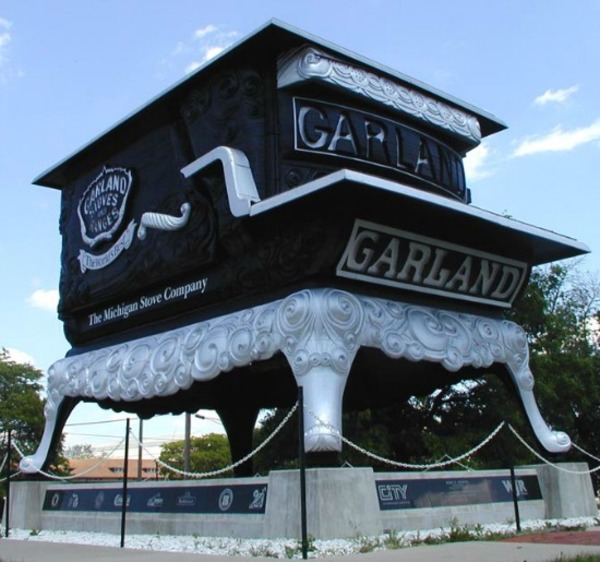