The Edison Memorial Fountain, located in the western half of Grand Circus Park, honors inventor Thomas Alva Edison and his achievements, and was Detroit's contribution to Light's Golden Jubilee, the celebration of the 50th anniversary of Edison's invention of the electric lamp.

On Aug. 26, 1929, the Common Council approved $22,000 for building a fountain to honor Edison's achievements. The gesture had been proposed by the Board of Commerce and representatives of electrical concerns.

Following Council approval, work started right away, on Aug. 29, 1929 -- less than two months before it was to be unveiled for the national jubilee on Oct. 21. That event also was marked by Henry Ford dedicating his Edison museum at Greenfield Village, which includes Edison's Menlo Park lab. Edison and President Herbert Hoover attended that event at the Dearborn museum. There is a photo of Edison standing in front of the fountain dated Oct. 21, 1929, but he's alone, without any celebration or other dignitaries to be seen.

The plaque lists Oct. 21, 1929, as the date of dedication, but that was the day of the actual jubilee celebration. Mayor John C. Lodge and others unveiled it and lit it up for the first time at a ceremony a few days earlier, on Oct. 18.

The plaque on the fountain reads:

The fountain is circular, made out of Indiana limestone and is 60 feet across. Forty pigeons strut about the fountain's upper frieze.

The lights were turned on in Edison's memory during his funeral in 1931.

After repairs, the fountain was rededicated Oct. 18, 1984. New lighting, jets, and controls were installed in 1998. 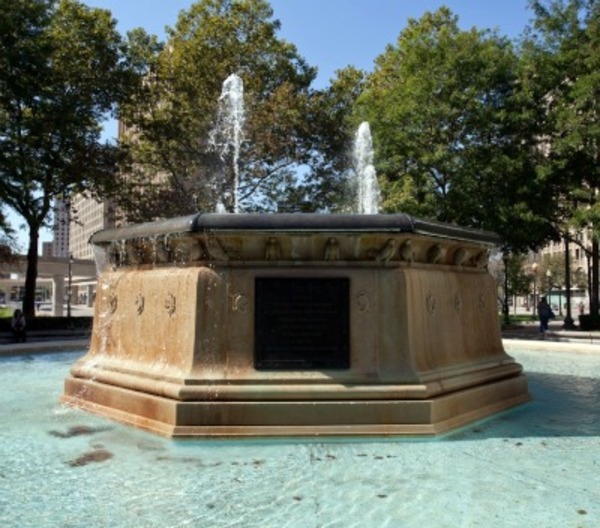