The SS Eastern States was one of the Detroit & Cleveland Navigation Co.'s Big Six of overnight passenger steamers.

She, like the other five, was designed by master naval architect Frank E. Kirby and built at Detroit Ship Building Co. in Wyandotte, Mich. Though she and her sister ship, the Western States, were originally built for the Detroit & Buffalo Steamboat Co., which would be absorbed into the D&C line in 1909.

"The new steamer Eastern States, bedecked with flags and with every pennant flying to the breeze, was thrown open to the public for the first time yesterday afternoon, when 2,500 invited guests of the Detroit & Buffalo Steamboat Co. took the initial trip and went into Lake St. Clair," the Detroit Free Press wrote the following morning. "The new boat is now complete in every particular and 'Queen of the Lakes' for her is no misnomer."

She was powered by a 4,200-horsepower, three-cylinder inclined compound steam engine that was fired by six coal-fired Scotch boilers.

D&B had a very short history. It was founded in 1902 to start a new route between Detroit and Buffalo (in cooperation with the C&B Line). Though there had been service between Detroit and Buffalo previously, there had not been an overnight express service and the start of the service might be related to technological advancements: Steamers were now fast enough to make the relatively long route practical for overnight service. The route proved immediately popular, and D&C absorbed the D&B in 1909, ending its history.

D&C put the City of Cleveland III into service in 1908 for service to Cleveland, but when the City of Detroit III joined her four years later, they were put on the route to Buffalo. The Eastern and Western then switched to the Cleveland run and served that route until the the Greater Detroit and the Greater Buffalo came out in 1924. The D-III and C-III then moved to the Cleveland run, and the Eastern and Western then ran a service from Buffalo to Chicago, with Mackinac Island as a featured stop.

With overnight steamship travel becoming passe, and more companies choosing trucking to ship goods around, D&C was forced to lay up its fleet at the end of the 1950 season.

On June 21, 1956, the Greater Detroit, the City of Detroit III and the Eastern States were sold for an undisclosed amount to Robert L. Rosen, president of Lake Shore Steel, Inc., and Abraham Siegel, president of the Siegel Iron & Metal Company. “Neither of the new owners had any definite plans for the operation of the three vessels—only a determination that they should not be scrapped,” the Free Press wrote. “After all,” Siegel’s son Norman told the paper, “they’ll be worth as much 20 years from now as far as scrap is concerned as they are worth today. Even though our company is in the scrap business, we have no intention of scrapping them.” Rosen and Siegel were sentimental about the steamers, but they had to face up to the cold, hard economic facts.

“The new economy calls for higher costs of operation — notably labor,” and then there was the skyrocketing prices for scrap metal, the Free Press noted.

On Dec. 12, 1956, the Eastern and her big sis the Greater Detroit were towed out into Lake St. Clair and set afire, burning away their decorative plaster and wooden superstructure in order to make it easier for the wreckers to get at her metal bits.

Her pilothouse was saved, transported to collector Frank Schmidt's home in suburban Cleveland. Schmidt had acquired much of the decorative woodwork and plasterwork from the D&C vessels before they were scrapped. The Eastern's pilothouse was still there but looking rough in 1965, just nine years after the Eastern was torched; it is assumed it rotted away over the years. 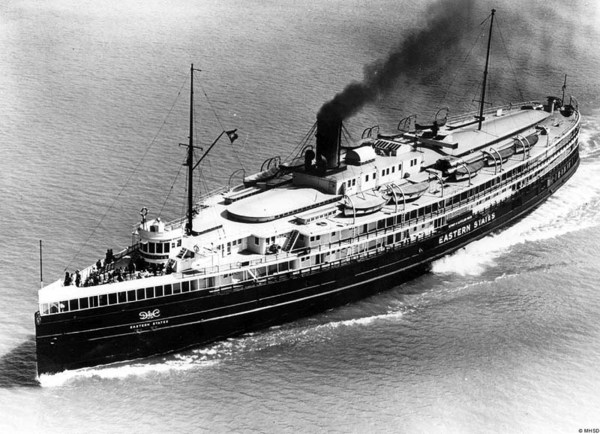