The first Detroit Opera House stood at the head of Campus Martius, between Woodward and Monroe avenues.

Its curtain rose for the first time on March 29, 1869, with a performance of London Assurance, giving the city of only 79,000 people its first professional, legitimate theater.

“Detroit has now opened a temple for the drama of which her citizens may well be proud,” the Detroit Free Press announced the next day.

The building was designed by Mortimer L. Smith of the firm Sheldon Smith & Son. Its interior - including the elaborate drop curtain - was decorated by Robert Hopkin. Garry Hough was the opening manager.

During the summer of 1896, the opera house exhibited several reels of film through an eidoloscope, including a bullfight in Mexico.

Retailer J.L. Hudson’s first store was located on the ground floor of this building, opening April 2, 1881. Ten years later, he erected his own building a block north, at Gratiot and Farmer Street.

That proved to be a wise move, because on Oct. 7, 1897, a fire ripped through the opera house and central business district, wiping out most of the block. Only the wind spared Hudson’s shop from going up in smoke, too.

The Detroit Free Press described the four-hour inferno as being “awful in its grandeur, yet as fascinating as any play that ever graced the boards of the Detroit Opera House. … Nothing remains of the buildings except the few insecure walls standing like gaunt specters -- a reminder of the terrible might of the fire fiend.” 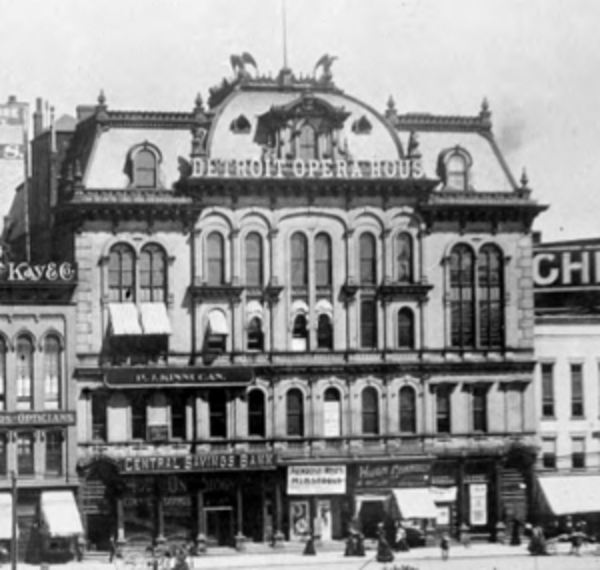