After the turn of the 20th century, the Detroit Public Schools set out on a building boom to keep up with the city's flourishing population.

Among those new buildings was the Caroline Crosman School, which opened in 1911 and was named after Caroline Crosman, a beloved, longtime principal at the Barstow School and a teacher at the Wilkins School, according to "Histories of the Public Schools of Detroit."

Throughout its 96 years of operation, many prominent city natives passed through Crosman's halls, such as actress Lily Tomlin and Melvin Franklin of the Motown group The Temptations.

The school was designed by the Detroit firm Malcomson & Higginbotham, which also designed a number of other schools in the city, such as John F. Nichols, Theodore Harms, William C. Maybury, Joseph W. Guyton and McKinstry elementaries, and Northwestern, Eastern, Southeastern and Central high schools, among many others. The firm also designed what is today known as Old Main, which was built as the city's first Central High.

Before the John C. Lodge Freeway was constructed in the 1950s, the Crosman school's original address was 1501 Hamilton St.

In 1921, the school was expanded to accommodate the continuously growing population. Renovations to update the building were made in the 1980s. The auditorium was converted into office space sometime during the '80s or 1990s. As the end of the century neared, and as attendance dropped, the building was converted into the Caroline Crosman Alternative High School for teens who trailed their peers.

By 2007, the school had been deemed outdated and said to pose a safety hazard to students and staff. The remaining students were transferred to the nearby Hutchins Intermediate School at 8820 Woodrow Wilson St.

The building was left vulnerable to scrappers, who caused considerable damage to the historic school. Vandals covered Crosman in graffiti. Flooding from burst pipes flooded the basement. In 2009, the Caroline Crosman School was scheduled for demolition, but was never funded.

Currently, the building is decorated in graffiti and the sub basement has been turned into a swimming pool due to burst pipes.

In the fall of 2015, the Detroit City Council approved selling Crosman, Hutchins, the JTPA Nursing School and the sprawling Herman Kiefer complex -- which includes seven pavilion buildings and the 462,605-square-foot main hospital, which closed in 2013 -- to Ron Castellano, a New York-based developer with several successful historic redaptive-reuse projects under his belt. The deal to purchase the buildings from the City took almost two years to complete.

Castellano's Herman Kiefer Development LLC set out securing the schools and cleaning up some of their blight. Castellano's $143 million investment calls for apartments, a small hotel, a walkable campus and an indoor skate park, among other improvements. The developer also is taking on maintenance of 300 empty lots and 100 vacant homes in the Virginia Park neighborhood.

The project, incredible in its potential and scope, could completely transform the area around Clairmount and the Lodge Freeway and is unlike any other such renovation project in the city's history in terms of size.

"This is such a tight-knit area," Castellano told the Detroit Free Press in a June 17, 2005, story breaking news of the potential deal. "Just talking to people strengthened what I believed. It still can be that great place it once was with enough focus and energy. With Kiefer having so much power, it can sprinkle throughout the whole neighborhood. ... We want the work at Herman Kiefer to radiate outward." 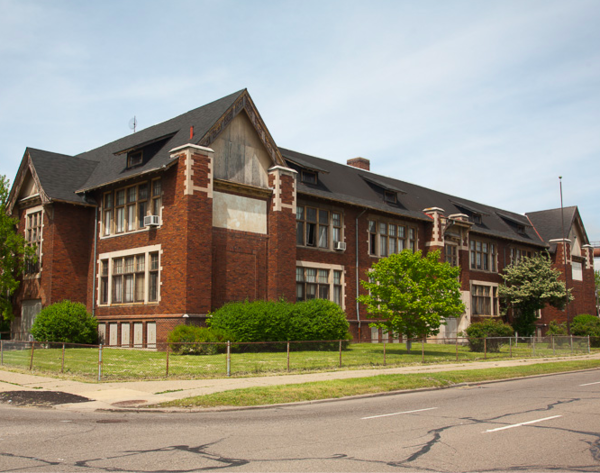