The Continental Motor Co. was founded in 1905 on the far west side of Michigan, in the town of Muskegon.

The company began by building automobile engines and later also became known for their aircraft engines. As business grew, another location was needed. What better place to build motors than the Motor City itself?

The original plant was designed by Albert Kahn, a well-established architect throughout Detroit, with the capacity to produce 18,000 engines per year. The main building reportedly had 2-foot thick walls while the power plant’s were closer to 3 feet. After several expansions, the plant spanned nearly 12 acres.

In March 1912, the company announced it had begun turning on the amenities at the Jefferson factory. Continental officially joined the big names in the growing car industry. The company set about to get operations in order as soon as possible. By July 1, 1912, "active manufacturing operations” were in progress.

During Continental's occupancy of the factory, the lesser-known company produced the driving forces behind iconic automobiles such as Hudson, Abbott-Detroit, Detroiter, Kaiser-Frazer and nearly 100 others.

“The new factory has a capacity far in excess of the Muskegon plant," according to the Detroit Free Press. A May advertisement in the Free Press that year for a nearby subdivision considered it "the largest motor mfg. co. in the world." The horizons were bright for the growing company and its new factory.

Early in 1920, $1,000 in employee pay envelopes ($13,000 today, when adjusted for inflation) was stolen from a shed that served as a pay office for the construction company which was adding an addition onto the factory. A couple of Continental employees were detained and questioned in relation to the robbery.

In 1929, as aircrafts became a more established mode of transportation, the company began producing four-cylinder engines, along with car engines, at the factory. During the early 1930s, Continental began producing its own automobiles but found it hard to compete with the steep local competition.

The Continental Motors factory played a significant role in the "Arsenal of Democracy" that Detroit became during World War II, producing aircraft parts and combat vehicle motors, along with engines for R-975s and tanks. The facility was adapted to produce such engines and parts, including the addition of testing cells in 1942. The testing cells were chambers with peaked, metal roofs that opened for ventilation, allowing engineers to test the various engines at full power without the worry of carbon monoxide poisoning.

The company ramped up production for "vital war materials" as the heat of WWII raged on. By the end of 1943, the East Jefferson plant employed 8,000 hardworking Detroiters, most of whom worked eight hours a day, seven days a week. Plans were made for the factory to be opened throughout the Christmas of 1943. The workers had a different idea. According to a Dec. 25, 1943, Detroit Free Press article, nearly 6,000 workers arrived to work on the 24th drunk and "too dazed to do precision work." First, most of the employees of the day shift showed up in an unfit state. They were sent home, in anticipation that the afternoon shift would be less intoxicated. The next shift arrived just as jolly and company officials concluded to close the plant until the midnight shift, due in at 11 p.m.

In October 1944, the Lansing State Journal reported that Washington announced that 79 Michigan plants being used for war production were going "to be disposed of by the defense plant corporation after they have been declared surplus," the Continental plant included. The Reconstruction Finance Corp. "would negotiate at this time for their sale or lease subject to contingencies of present contracts and length of time plants will be used in war use."

Continental Motors' factory was used for production and provided crating and shipping of finished aircraft and tank engines along with spare parts. Nearly an acre of land, a 32,465-square-foot building, and 10,464 pieces of production equipment and portable tools on the plant were used toward the war effort. As the war ended, production slowed, but the cutback didn't mark the end.

In 1945, Continental Motors agreed on a contract to begin producing engines for Kaiser-Frazer cars, a company based in Willow Run, Mich., near Ann Arbor. As Continental's production continued to decline, K-F leased the plant from the company in 1947, and the Continental Motors factory became the engine division for K-F. The plant employed 1,200 at first and by August, produced 12,000 engines per month.

By 1948, however, K-F began to face a similar fate to Continental’s. Kaiser-Frazer began cutting shifts and laying off employees at various locations to cut back on costs and “adjust manpower and material schedules,” according to a February 1948 article in The Shreveport Times of Louisiana. The Detroit plant was cut back to four-day workweeks, closed on Fridays and weekends "as a result of fuel and transportation shortages," according to a Feb. 12, 1948, article in the Traverse City (Mich.) Record-Eagle. The article also said that “Detroit's gas plight,” caused by the harsh winter, affected production at other companies, including Chrysler, Packard, and General Motors.

Soon after, the top automakers began debating whether or not to relocate production outside of the city, maybe even out of state. As the U.S. joined the Korean War in 1950, there was a resurgence in the need for military production. The government once again turned to the automakers of Detroit.

In 1951, Kaiser-Frazer bought the East Jefferson factory from Continental. In 1965, the Detroit Engine Corp. bought the rights to the Continental Motors line of engines, and in late 1969, what was left of Continental was acquired by Teledyne Inc.

Once K-F bought the plant, it was remodeled to produce motors for training planes and helicopters, such as R-1300s and motors for C-119s. These "plans call for accelerated output and bigger employment," according to a 1952 Detroit Free Press article. But 1952 had started on rocky ground. A Free Press article from January of that year stated how the Defense Production Administration informed the auto industry of additional production cuts. The news “came as no surprise to the manufacturers,” who knew the production cuts were approaching before WWII even ended.

The following year marked the end of the Kaiser-Frazer partnership and the end of the Korean War, meaning less military production would be needed. The Jefferson factory was now owned by the newly formed Kaiser Motor Inc., half of the previous partnership.

At this point, the future of the factory seemed unsure. Would a smaller car producer be able to stay afloat with the bigger competitors like Ford, Chrysler, and General Motors?

In April 1953, Kaiser Motor merged with Willys-Overland Motors Inc., producer of Jeeps. After the merger, most of Kaiser's production was transferred to the Willys-Overland plant in Toledo, Ohio. Kaiser sold its main factory at Willow Run that same year. Soon, the rest of the company's Michigan factories would be sold, too.

The last job advertisement for the Engine Division of Kaiser Motors was listed in a June 1954 edition of the Detroit Free Press. Production at 12801 E. Jefferson Ave. had ceased by 1955, and Kaiser Motors was “virtually out of business in Michigan,” according to a Benton Harbor, Mich.- based newspaper from October 1955. Many nearby companies welcomed the former Kaiser factory employees. Others were left jobless, adding to Detroit's growing number of unemployment.

During the 1960s and ’70s, much of the dozen-acre factory was razed, leaving the power plant, foundry and test cells. The cleared land was built upon and used for various purposes, which currently include a U.S Postal Service building and the Wayne County Probation Office.

The remains of the plant sat waiting to be active again until the 1980. That’s when Continental Aluminum, a metal-recycling company entirely separate from the previous Continental Motors, bought the building and began operations in the foundry. Throughout the company’s occupancy of the plant, it faced many complaints and fines from local residents concerning the toxic process involved in recycling metals. Continental Aluminum relocated to a more appropriate facility in New Hudson, Mich., in 1998. The former Continental Motors plant spiraled downward after becoming vacant.

In 2008, the foundry portion of the Detroit property was demolished, and scrappers picked away at the remains of the production plant. Sometime around 2011, scrappers astonishingly claimed the water tower. Not much has been done with the plant since.

Today the test cells, with their peaked roofs, and the power plant, with its iconic smokestack labeled "Continental" in white letters, are all that remain of the once sprawling, 100-plus-year-old structure. It stands as a reminder of the several companies that once occupied it and the city's contribution to the automobile and aircraft industry and to the country’s war efforts.

If you drive down East Jefferson, you can catch a glimpse of the Continental smokestack still standing in the distance, behind a Dollar General. 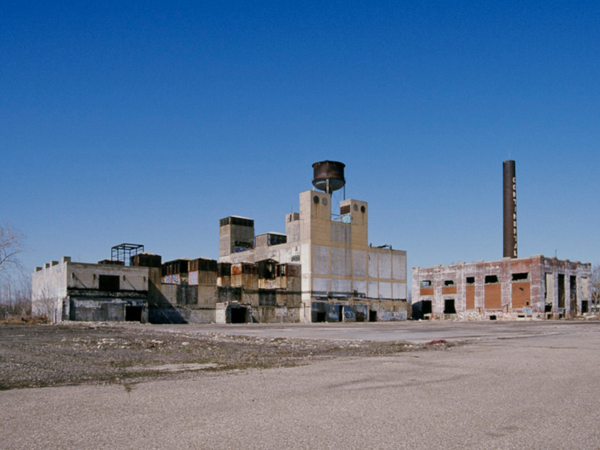