This building is located on the south side of West Grand River between Woodward and Griswold Streets.

On Aug. 8, 1922, permit #36198 was issued to Sebastian S. Kresge, president of S.S. Kresge Co. - the forerunner of Kmart - for the construction of a ten-story brick and concrete structure. Originally named after Kresge's son Stanley, the building was designed by Brown, Derrick & Preston. The structure measured 60 feet, 1 inch deep by 59 feet 6 inches long. Its estimated cost was $190,000 ($2.65 million today, when adjusted for inflation).

Since 1912, when Kresge's 5-and-dime store was established, Kresge had become a household name in Detroit. After working various jobs in his home state of Pennsylvania, Kresge became a traveling salesman in 1892-1897. In 1897, he opened his first shop in Memphis, Tenn., with partner J.G. McCrory. Kresge moved to Detroit in 1907 and worked with Charles J. Wilson until obtaining title to the firm in 1912.

The Stanley Building was later renamed the Grand River Building.

According to the Tract Index of Wayne County Records, Kresge leased the land upon which this building was constructed. The estate of Harriet Lathrup owned lot 69 of Section 8 of the Governor & Judges Plan until 1973, when Qwikee Donut & Coffee Shop purchased the land with the building.

The interior received minor alterations during the years that the Kresge Foundation owned the structure (1922-1973): the first and second floors of the exterior underwent dramatic change in 1976, obscuring the original appearance. Floors three through nine are starkly articulated by a single double-hung sash window between the pilasters. A denticulated cornice rests above a classical frieze relief. Side and rear elevations are utilitarian in appearance, with the concrete frame partially exposed. 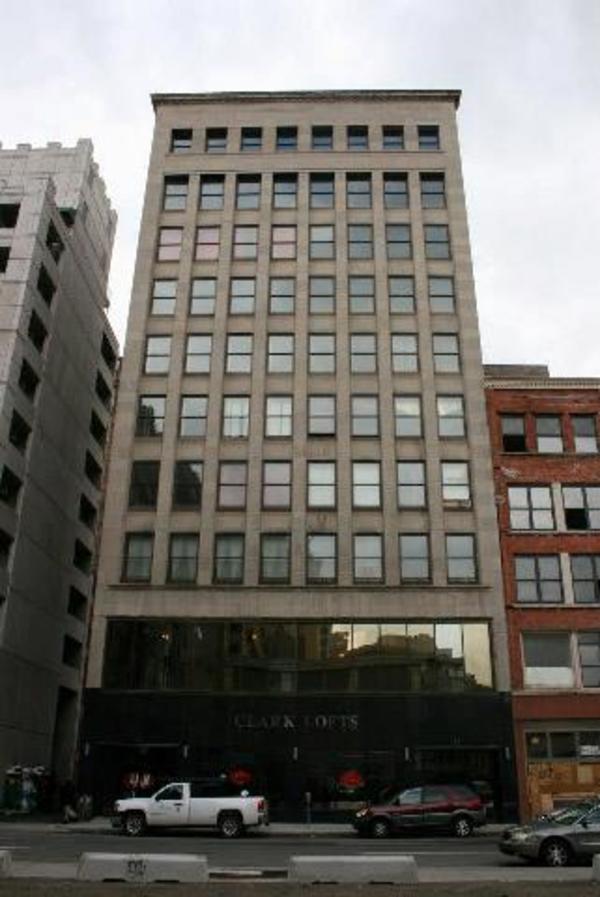