The City of Toledo was built for the unsuccessful Toledo & Islands Steamship Co. The steel-hulled paddlewheel steamer was primarily built for tourists on Lake Erie. She puffed around the Great Lakes at about 24 miles per hour.

She was launched Jan. 26, 1891, at Toledo, Ohio. She entered service later that year and ran from Toledo to Put-In-Bay, Ohio. But it was a rough beginning, when during her trial run that June, a steam chest (the chamber in the engine from which steam is distributed to a cylinder) exploded, killing one person and injuring two more.

The Toledo was notable for having the first inclined engine on a Great Lakes excursion steamer. The cost to build her was about $140,000.

In 1893, she ferried passengers to the Chicago's World Fair between the Windy City and St. Joseph, Mich.

After the Toledo & Islands Steamship Co. went bust, the Toledo was bought in 1895 by the White Star Line, which later ran the successful steamers Tashmoo and Greyhound.

The 212-foot excursion steamer was lengthened to 252 feet and a second stack was added in the winter of 1916-1917. The Toledo mostly ran between Detroit and Port Huron from 1895 to 1916, and then, perhaps more appropriately, switched to a route between Detroit and Toledo from 1917-1926. In 1926, White Star sold her to the Anchor Line of Michigan, which then flipped her a year later. She would be sold several more times over the following years.

In 1932, Charles V. Fix bought her, but had different plans in store. In 1932, with the rise of the automobile supplanting the demand for excursion steamers, the steamer was converted into an auto-passenger ferry for service across the Niagara River. In 1941, she went idle and sat docked in Buffalo, N.Y. 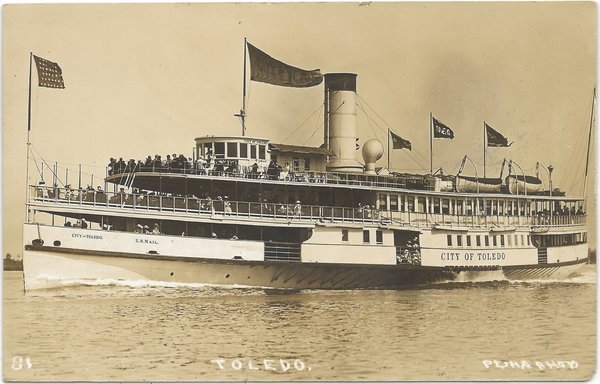