Cathedral of the Most Blessed Sacrament

A parish that started off worshipping in an old shoe factory wound up with a church so grand, it became a cathedral.

The Rev. John J. Connolly of Holy Rosary Church was sent to establish a new congregation in the fast-growing North Woodward section of Detroit. The newly formed congregation of the Most Blessed Sacrament held its first services in August 1905. The ambitious priest soon found himself with a growing flock, and it was clear that an old industrial building in Highland Park simply would not do.

In November 1905, work began on a two-story, brick building that would house the church on the ground floor and the Blessed Sacrament School in four classrooms located on the second. Designed by Harry J. Rill, the building was substantially complete by St. Patrick's Day 1906, and a reception was held for the school on March 20. The parish celebrated its first Mass in the structure a few weeks later, on April 1, 1906.

But it soon became clear that with nearly 200 families, a 76-foot-by-80-foot building would not do, either.

Architect Henry A. Walsh of Cleveland, who had graduated from what is now the University of Detroit Mercy, was commissioned to design something more grand. He came up with a gray limestone church designed in the Neo-Gothic style. The new church - measuring 250 feet by 78 feet - was to have room for 1,200 parishioners. Corrado Parducci was hired to do the church's exterior sculpture, and the 22 Medieval-styled stained-glass windows were designed by Willet Studios of Philadelphia.

Plagued by financial problems, construction began in November 1912, but moved slowly. Auxiliary Bishop Edward D. Kelly officiated at a cornerstone-laying ceremony on Oct. 11, 1914. Priests from 30 parishes across Detroit were among those in attendance.

The church hosted its first Mass on Aug. 13, 1916. Previously, the main transept had been opened for worship and funerals.

"Men ask why we should construct a white elephant of a church," Connolly said in his sermon that day. "I answer nothing is too good for God. David amassed a sum equivalent of $300 million in modern money before work was even begun on the temple. Yet that edifice contained merely two tablets of stone, while our church houses the living God in His blessed sacrament."

Yet though open, construction on the church would remain unfinished for 35 years. More specifically, the bell towers envisioned by Walsh weren't built yet.

On May 22, 1937, the Diocese of Detroit was elevated to an Archdiocese and Most Blessed Sacrament was chosen to be the Cathedral church, replacing St. Patrick, which had served as the Cathedral since 1877.

Mooney then set out to raise money to finish the church's exterior by adding a pair of bell towers. Walsh, the original architect for the church, had fallen ill while Blessed Sacrament was being built and had retired decades earlier. Despite being confined to his bed, he couldn't pass up the opportunity to finish his proud creation, and sent a rendering of Blessed Sacrament sporting twin towers. However, the addition was delayed by World War II.

Mooney, who became a cardinal in 1946, revived his plans after the war was over. Walsh had died on Jan. 3, 1940, so the Archdiocese turned to Detroit architect George F. Diehl to take Walsh's rendering and come up with plans to construct the towers. The addition was completed in October 1951. On Nov. 17, 1951, the Most Rev. Allen J. Babcock consecrated the completed building.

From 2002-03, the church would undergo a $15 million renovation that would prove to be controversial. Cardinal Adam Maida hired modernist architect Gunnar Birkerts, whose work in southeast Michigan includes the south wing of the Detroit Institute of Arts and the Domino's Pizza headquarters in Ann Arbor, was hired to transform the Neo Gothic interior of Blessed Sacrament into a look bordering on the futuristic. Some have compared it to something from "Star Trek."

Over a period of 16 months, crews from P.M. Net Inc. of Bloomfield Hills, Mich., oversaw the project's design and construction.

Besides replacing the chandeliers, altar and pulpit, the other biggest changes were the enlargement of the exterior window openings - done to allow more natural light into the nave - and extending the sanctuary - the area around the altar - out into the congregation. The latter update required finding new marble to match the original floor.

“A piece of floor was removed and taken to a quarry in Italy, which was challenged to match the colors and textures in the stone,” Frank J. MacDonell of P.M. Net told the Toledo Blade in March 2003. “It worked out perfectly. You can't even tell where the old and new floor starts and ends.”

MacDonell defended Birkerts' modernist makeover, telling the Blade that it would have been difficult to upgrade-yet-maintain the original look of the church because the original construction material and design was nearly 90 years old.

With Birkerts' approach, he said, “The symmetry is there like you would find in an older building, but a lot of the new angles and forms contrast with the architecture to accentuate or complement" it. Yet, especially as preservation and restoration of historic buildings has gained popularity in recent years, the rather mismatched merger of modern and Neo-Gothic has drawn more criticism over the years.

The work also included replacement of the original pews and rearranging them to improve the view of the altar; installing a new baptistry, organ, altar, pulpit and bishop's chair; upgrading the sound system and lighting; a full cleaning of the church's exterior and interior; putting on a new roof and adding a new air-handling system; making parking lot upgrades, and adding a plaza on the north side of the building.

The made-over cathedral was rededicated on March 25, 2003. 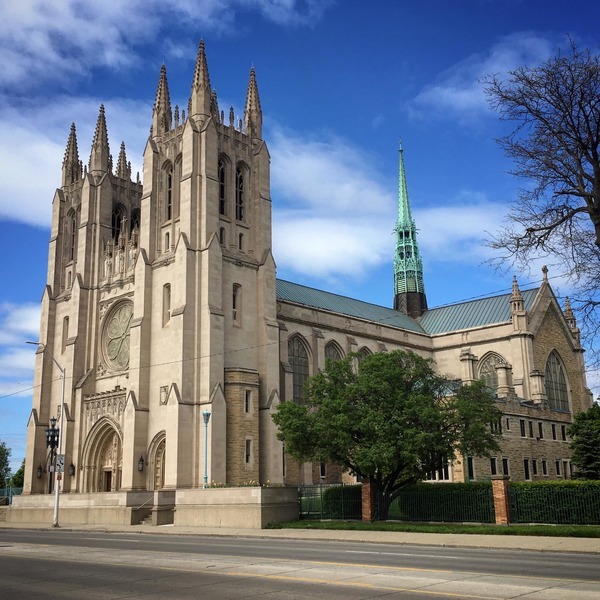 Cathedral of the Most Blessed Sacrament - Old Photos

Cathedral of the Most Blessed Sacrament - Photos